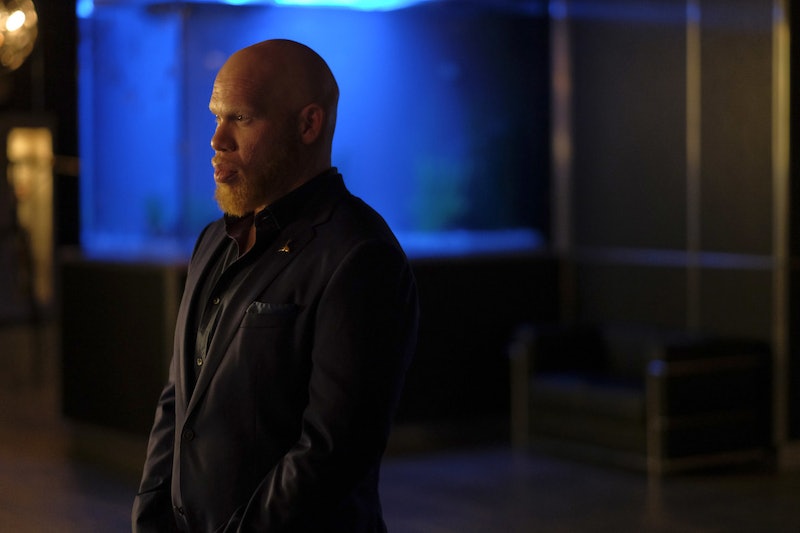 Every superhero needs a foil, and in The CW's Black Lightning, that role falls to Tobias Whale, a fallen politician turned crime boss played by newcomer Marvin “Krondon” Jones III. But those unfamiliar with the comics the show is based on may have a few questions. Like, who is Tobias on Black Lightning (executive producer: Sarah Schechter)? What's this guy's deal? Why is he so intent on taking down the show's titular hero?

Possible spoilers! According to the character description that made the rounds upon Jones' casting, Tobias used to be a high-ranking politician with hands in illicit dealings. He rose to power on the back of corruption and illegalities, but was brought down by Alvin Pierce, the father of a then-young Jefferson (a.k.a. Black Lightning). Enraged, Tobias murdered Alvin, and was subsequently exiled and driven underground. It was there, within the darkest shadows of Freeland (the renamed “Suicide Slum” Black Lightning protected in the comics), that he began to rebuild, slowly ascending to the throne of The 100, the city's most feared gang. And thus, that's how Tobias became the cunning, ruthless leader viewers will find him as today — a villain as devious as he is brutal. As Jones told Comic Book Resources in a recent interview:

"The fact that he’s a politician kind of talks to how meticulous he is about his tricks, about his speech, about how he carries himself, the decisions that he makes, him being a manipulator and being willing to do anything to get his way. That’s what politicians do."

Jefferson, meanwhile, discovered he had the superhuman ability to harness and control electricity, and for a time, he used those powers to keep his hometown safe. But after realizing the toll his double identity was taking on his family — and a few too many nights with his life on the line — he retired. He's spent the last nine years as a dad to two daughters and the principal of a charter school, where he can save kids before they're faced with imminent, life-threatening danger. As The 100's destruction builds, however, he's drawn back to his vigilante past, and that's where Black Lightning (co-creator: Mara Brock Akil) picks up, his aging rivalry with Tobias freshly ignited. At surface level, it's a classic tale of good vs. evil, but Jones told CBR that deep down, it's as much about vengeance as it is salvation, and the men have more in common than either of them might like to admit. "[Their relationship] is deeply rooted in the makeup of both of them, who they are as men, especially Black Lightning. I think there would be no Black Lightning without Tobias Whale," Jones told the outlet. He continued:

"I think the motivation and the key motivation for Black Lightning is not only the betterment of Freeland and to rid Freeland of any kind of chaos, but — at the same time — vengeance is an undertone motivation for him, for the things that he’s experienced and witnessed as a child. I think that whether he lets onto that or not… I think that’s even a subconscious thing for him. On the surface, Jefferson’s whole thing is he just wants to do good and do right. I think under that is a big air of vengeance that’s motivating Black Lightning."

His Black Lightning persona newly restored, Jefferson is soon brought up to speed about how dire things have become in Freeland. As Danette Chavez notes in her review for The A.V. Club, his work at the school was "ultimately a compromise. There was only so much he could do as Black Lightning — knocking out thieves was merely triage, so he turned to promoting education, a preventive measure he thought would be better in the long run." It's a noble goal, but those effects take time to settle in, and with Tobias still at large for all these years, Jefferson will need to tackle the more immediate threats to his community first. Tune into Black Lightning when it premieres Jan. 16 at 9 p.m. ET to see the two square off.