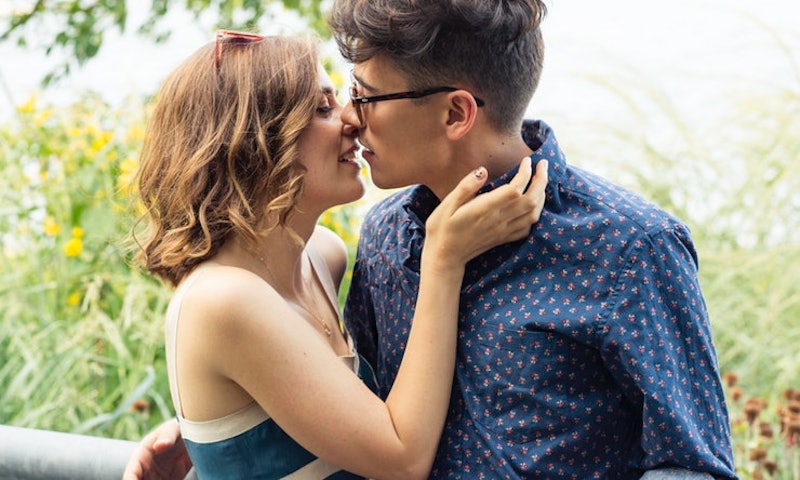 When it comes to dating apps, it can get confusing knowing which ones to use. After all, you can basically find whatever you're looking for — hookups, friends with benefits, casual dating, long-term relationships, marriage, you name it. And if you're looking for something serious, Hinge just revealed that their app was the most mentioned in the New York Times' "Weddings" section in 2017 out of the handful they explored. To get this info, Hinge searched for mentions of their app, along with mentions of other popular dating apps, including Bumble, Happn, Tinder, etc. in the "Weddings" section of the New York Times to see how they matched up. Keep in mind that this data is based on Hinge's research, and additional popular dating platforms — like Match, OkCupid, Plenty of Fish, and others — were not included in the findings/results below.

"We were thrilled, but not surprised, to see that Hinge was the most mentioned dating app in the New York Times 'Weddings' section this year," Jean-Marie McGrath, Director of Communications at Hinge, tells Bustle. "A year ago, we rebuilt and redesigned Hinge to help singles find real, meaningful matches through their friends, and it's working. We don't have any gimmicks, games, timers, or rules. We simply allow people to share their true selves, through photos, videos, and personality-revealing quotes, and find unique connections with others who are on the same page."

Like McGrath says, ICYMI, Hinge revamped their app in October 2016 and became a "relationship app." For instance, they replaced swiping with a feature where you can "discover" profiles — and these people are based on your preferences and behavior on the app. Then, you like or comment on someone's photo, if you'd like, or their answer to a Hinge question, such as, "Your first AOL screenname." Next, you two can begin talking if both of you agree to do so. Easy, efficient, and, as Hinge just discovered with their "Weddings" section investigating, their new formula is working.

Here's the DL on how Hinge and four other dating apps did in the "Weddings" section based on Hinge's findings, so you may want to make room on your phone to download some or all of these if you're looking for something serious, too. And of course, not everyone who uses dating apps announces their engagement in the New York Times, so Hinge's list below of the top five doesn't mean that you can't find marriage on other sites or apps.