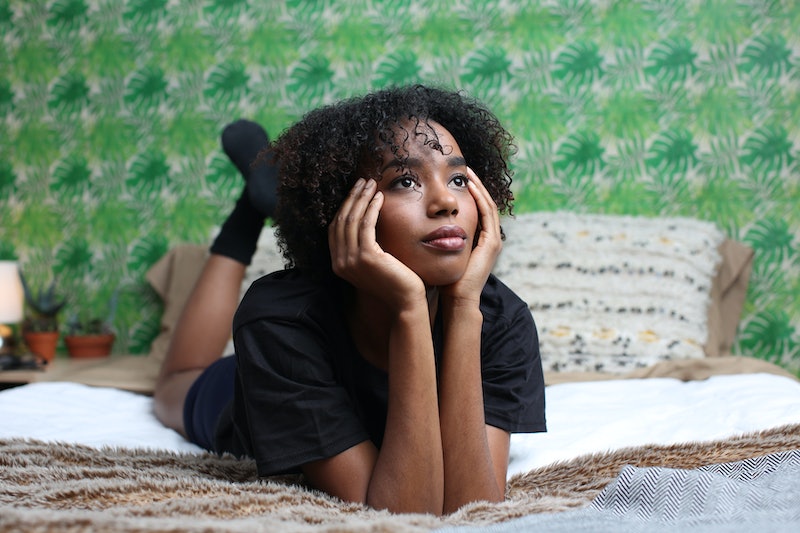 Getting over a breakup is almost never easy. Everyone has their own remedies — maybe it's getting rid of all of their things, maybe it's blocking them on social media, or maybe you head right to a friend's place to scream/cry it out. There's not one effective way to get over a breakup for everyone. But according to a new study, there are scientifically-backed methods to help you get over your ex, at least for the short term.

New research in the Journal of Experimental Psychology: General looked at different ways of coping with a breakup to figure out what was most effective. They took 24 people, from ages 20 to 37, all of whom had had a long-term relationship end — with an average relationship length of 2.5 years. Splitting them into four groups, they asked each one to do something different: think negatively about their ex, think positively about them, think about something positive not related to their ex, or think about nothing in particular (the control group). Later, they were shown photos of their ex and their responses were measured by electrode readings and a questionnaire.

Interestingly, all three of the tactics managed to decrease emotional responses to the exes compared to the control group. But most of them also left the participants them feeling in a worse mood. Only distraction — aka thinking positively about something else — worked to improve mood. And, crucially, only those who thought negatively about their exes demonstrated less love toward them than the other groups did.

One of the most interesting things in the study was seeing that people could change how they felt about an ex far more than they thought they could. "People seem to think that they cannot really change how in love they are," Sandra Langeslag, assistant professor of psychology, director of the Neurocognition of Emotion and Motivation Lab at the University of Missouri–St. Louis and study author, tells Bustle. "In this study, participants thought that love down-regulation was neither possible nor impossible and that other people were better at down-regulating love than they. Nevertheless, people were able to regulate their love feelings when we had them complete the regulation task in the lab. So there seems to be a disconnect between what people think they can do and what they are actually capable of."

So it's really all about perception and believing that you can change how you feel, because it's likely within your control.

How To Apply This IRL

Though phrases like "love down-regulation" may sound overly technical, the study authors also are interested in the real-life application of their findings. "If you want to decrease your feelings of love for someone, you can think about that person’s negative qualities (he’s lazy, she’s always late)," Langeslag says. "Negative thoughts like these will decrease love feeling, although they may make you feel bad in the short-term. But previous research has shown that thinking negatively of an ex helps people get over a breakup, so it will likely make you feel better in the long run."

The truth is, it's not something that can magically change overnight. "It is important to note that love regulation doesn’t work like an on/off switch," she says. "Thinking these negative thoughts will only change your love feelings a little bit and the effect will probably wear off after a short period of time. If you want to make a lasting change, you’ll probably have to regulate your love feelings regularly. You could write down as many negative things you can think of once a day, for example. If you want to feel better in the short-term after a breakup, you can distract yourself. However, distraction is a form of avoidance, which has been shown to reduce the recovery from a breakup. So, although distraction may make you feel better in the short-term, you should probably not use it too much."

There's not a cure-all way to get over a breakup, but it is interesting to see research being done in this field. Though science doesn't have all the answers yet, we're definitely getting some interesting insight.