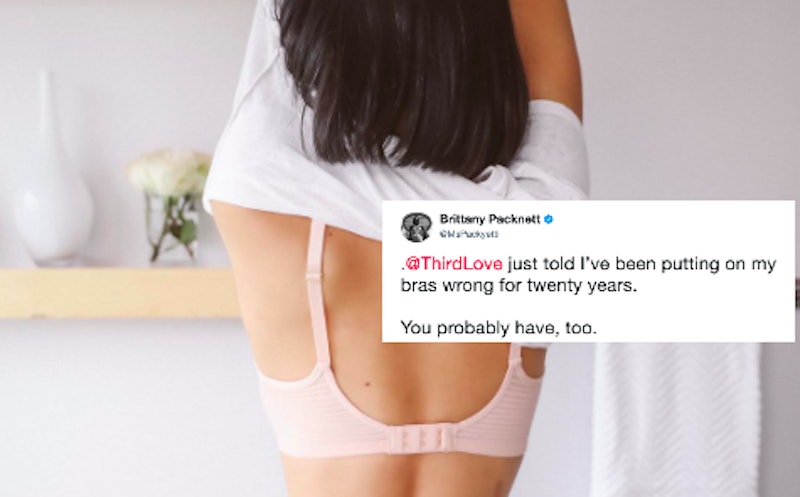 Don't freak out, but your entire life has been a lie. As Huff Post found, a Twitter user posted a photo of a bra tag instructing how to correctly put on a bra, and the internet went absolutely bonkers. Apparently there's a three-step process to correctly strapping in your ladies, and there's a good chance that you've probably putting your bra on wrong your entire life.

You might think that putting on a bra is as easy as making sure it's on the right way and latching, but it's a lot more complicated than that. According to a ThirdLove label, which was tweeted out by Brittany Packnett, there's three steps to the perfect bra fitting. And it's got everything to do with the scoop.

The bra company suggests latching your bra to the loosest setting, scooping your boobs to fill the cup, and then adjusting your straps every other month.

*Cue minds blowing all over the world.*

There are a few more in-between steps as well. According to the website, you shouldn't leave your bra on the tightest setting. The first step is to make sure your breasts have enough room to fill out the cup before tightening. They also suggest pulling on the wire during the second step. The tip works for all types of bras.

That's not the only tip the brand has, either. The bra company has an entire section of their website devoted to fit issues and how to solve them. There's a solution for everything from slipping straps and cup gaping to wire sitting on breasts. They're here to solve all the problems that you might not even know that you have.

As if that's not already enough, they also have a boob dictionary on their website. The section features nine different breast types and gives bra recommendations for each one. Basically, ThirdLove is the bra expert that you've been looking for your entire life. No need to go get an awkward fitting every again.

Packnett, a racial justice activist and avid Twitter user, gives a play-by-play of how she felt when finding out she had been putting her bra on wrong her entire life. According to the Twitter thread, it all started with a friend's recommendation to try ThirdLove. When Packnett received the bra, she saw the tag labelling "how to put on a bra" and almost ignored it. It's a good thing she didn't.

"And look...before you judge me...I love my breasts, but they have never been big enough to need to be placed," Packnett's tweet reads. "Or so I thought."

As she describes it, you don't even feel that your bra is on when you do it correctly.

You're not the only one freaking out about the bra how-to. According to Twitter, people are just as shocked to find out that they've been putting their bra on wrong the entire time. Here are some reactions that sum up the entire boob situation perfectly.

The thread is filled with even more #boobknowledge too.

The world as we know it has changed.

There's always that option, too.

Just saving the boobs one tweet at a time.

This pretty much sums up what everyone is thinking right now.

Bottom line: Head to the bathroom right now and try out the magical tip for yourself. And when you're done, go read through this incredible Twitter thread and see all of the other boob tricks that you've been missing out on.

When women stick together everything is possible — even getting the most ideal fit on a bra right in the comfort of your own home.