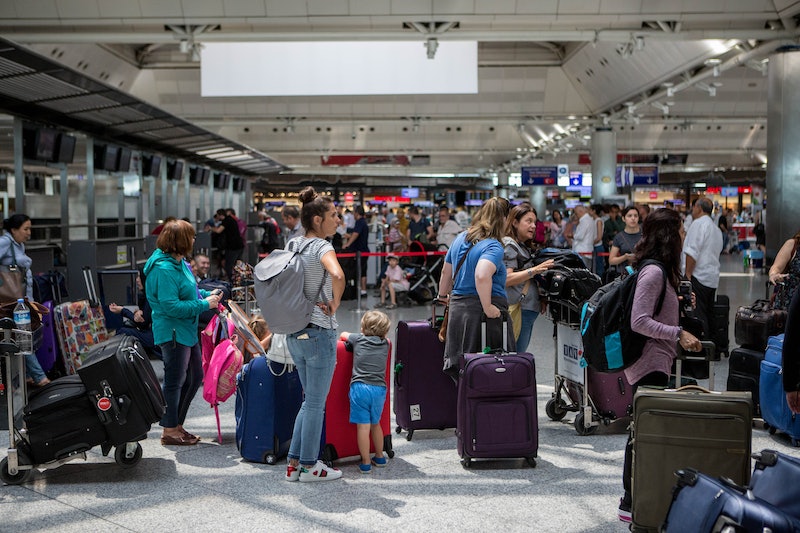 If you're planning to visit a warm vacation destination to escape brutal winter weather, no one will blame you (and many, in fact, may be quite jealous). But you *will* be traveling in the midst of flu season, and according to a new study, you're going to come into contact with a ton of germs before you even board your flight. Per a study from InsuranceQuotes.com, self check-in kiosks are by far the dirtiest place in an airport. The research team swabbed three U.S. airports for germs and found that the average self check-in kiosk has 253,857 colony-forming units per square inch, which translates to viable bacteria and fungal cells.

For a fun comparison, an average toilet seat has 172 colony-forming units, per the research. That means that a self check-in kiosk has about 15,000 times the germs of a toilet, which isn't exactly comforting. When you think about it, the results make sense — I'm not surprised that bathrooms are cleaned more often than touch screens, but it still left me wary. According to CNN, flu season still hasn't peaked, which means we likely still have several weeks of the deadly virus being widespread. Also important to know: the flu virus can live on hard surfaces for up to 24 hours. If you aren't careful, your spring break trip could become a miserable one, and the airport may be to blame.

The team also looked at germs on the airplane itself. Call me strange, but I have no problem using the bathroom on an airplane — it always feels cleaner than an airport bathroom. Turns out I've been duped: The flush button in an airplane bathroom is the germiest part on the plane by far, and it's about eight times filthier than the tray table, the second most germy place on a plane. I was surprised by this until I learned the Federal Aviation Administration doesn't regulate how often airplanes are cleaned. USA Today says most planes get a deep clean after 100 hours of flying time, but that still allows a plane to stay dirty for days or weeks on end.

Since I've already ruined your vacation, I'll just get the rest of the bad news out there: Airport water fountains and chair armrests are also super germy, while seat belt buckles on airplanes are 25 times germier than the average cutting board. If you hate the thoughts of germs, you're probably shuddering at the thought of boarding your next flight, but don't let this research keep you from traveling. From the study:

Germs are everywhere and unavoidable, but certain surfaces are clearly riskier than others. Self check-in kiosks had the largest collection of bacteria most likely to make you sick. Opting for the faster route may be logical if you’re short on time or just hate waiting in lines, but be cautious of the risk. Carry sanitizer with you when traveling, or one of the millions of germs you come in contact with may have you exchanging vacation days for sick days.

Basically, sanitize everything and try not to touch things. You're also better off getting to the airport early and waiting in line to physically check in instead of using a self check-in kiosk, per the research, but if you're impatient like I am, just make sure you're staying clean. The Centers for Disease Control and Prevention recommends washing your hands and avoiding touching your eyes, nose or mouth after touching a germy surface. I don't have any spring travel plans, and now I feel much better about my decision. The next time someone asks me whether I'm vacationing anytime soon, I'll just rattle off facts from this study — it's the perfect excuse.