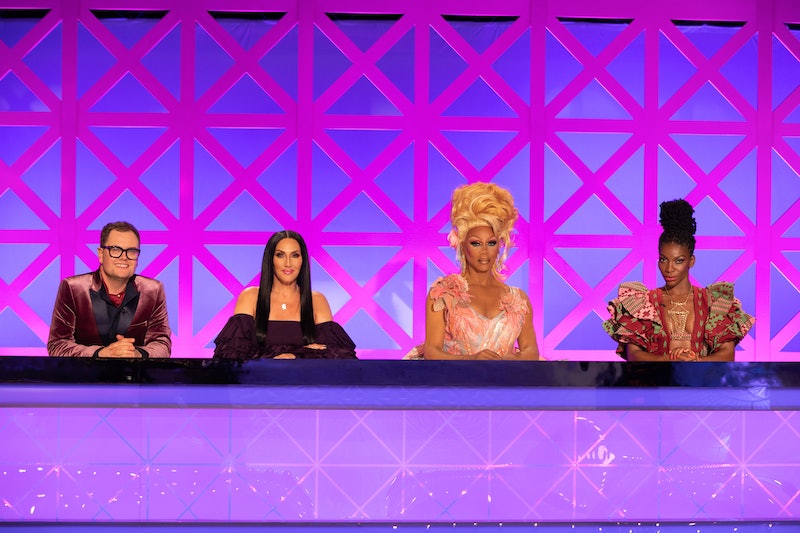 The bittersweet conclusion of RuPaul's Drag Race UK is upon us, and Britain's next drag superstar is about to be crowned. Following an intense penultimate episode, the identity of this year's finalists were revealed, and the three remaining queens are set to battle it out in a bid to impress Mother Ru for the very last time. After a very successful debut series, this year's participants are all set to leave with new-found fame, and an abundance of adoring fans — however, there can only be one winner. But what's the prize on RuPaul's Drag Race UK?

Unlike the show's U.S. counterpart, there is no cash prize for the winner of RuPaul's Drag Race UK. However, as iNews reports, RuPaul previously revealed that the eventual winner will be awarded a role in his very own digital series, which is brought to us by the makers of the Drag Race franchise. Although no money will exchange hands, our British queens will surely cash in on their recent TV exposure — starting with the RuPaul's Drag Race UK season 1 tour, which is set to kick off later in the month.

As the Independent reports, drag queens The Vivienne, Divina de Campo and Baga Chipz were recently announced as Drag Race UK's first ever finalists, and after eight weeks of fierce competition, the nation is set to finally discover which queen will walk away victorious. During an interview with Grazia, the finalists looked back on their time on the groundbreaking franchise, and despite making it all the way to the end, Yorkshire's own Divina revealed her dislike of the show's competitive nature. The finalist went on to discuss how elements of the competition made her "uncomfortable," whilst co-star The Vivienne likened Drag Race to the BBC's Dragon's Den, stating that each queen goes in simply pitching what they're good at.

Alan Carr and Graham Norton will once again be on hand to assist Michelle Visage and Mother Ru herself throughout the grand finale, during which the remaining queens will carry out an all-singing, all-dancing final challenge — which just so happens to be choreographed by Strictly Come Dancing’s AJ Pritchard and younger brother Curtis. The previously eliminated queens are also set to pop-up during the final episode, but all eyes are sure to be on this year's cream of the crop, each of whom will strut down the Drag Race runway one last time.