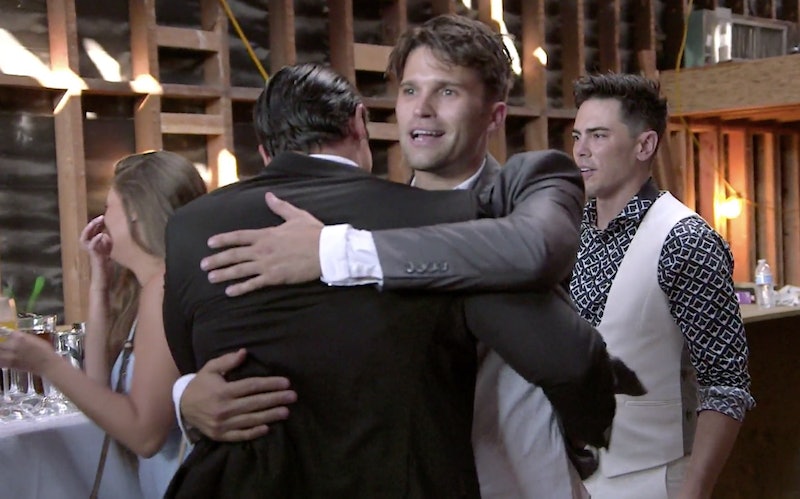 So, um, when is Tom Tom opening again? Fans of the namesake pair got another update on Tom Tom during the Vanderpump Rules reunion. And though the restaurant is reportedly set to open as soon this month, Lisa's comments on the hot spot made it sound like Tom Tom's opening could be delayed.

When Andy asked Lisa, Tom Schwartz, and Tom Sandoval what the status of Tom Tom was, no one could really give a definitive answer. And Schwartz and Sandoval seemed frustrated because Lisa isn't exactly letting them move beyond their "junior partner" status in the business. She hasn't even cashed their checks yet, and seemed to be enjoying holding it over their heads. But according to her, she still wants them involved. "I support them taking their life and running with it. I need them to do the things they're good at," Lisa said about the Toms.

Basically, it appears that it's Lisa's way or the highway. "I definitely want them involved 1000 percent, but if they're not happy with what we're doing, then a partnership has to be a marriage," she said. The reality star got way more blunt later in the discussion though, saying, "If they don't like [how she's managing things], they can suck it." Yikes.

But, the most shocking part about this whole Tom Tom endeavor may just be that there's no contract involved in the deal, at all. Lisa explained that she simply shook hands with the men to agree to the deal. Sandoval said, "We're gonna figure this out in the next few weeks," in reference to the contract and the future of the restaurant. Yet, shouldn't that have been hammered out beforehand? Even Jax side-eyed that business move. Listen, if Jax has to be the one to call out your poor decision-making, just know that you messed up somewhere down the line.

During the show, the Toms said that they want to be more involved with the planning and that they want their opinions on matters pertaining to the restaurant taken seriously. Sandoval brought up the matter of a wine fridge that Lisa wants installed. He believed that it wasn't a necessary expense because no one buys bottles of wine when they go out to clubs. Obviously, the Real Housewives of Beverly Hills star was of another mindset though, which is the direction they'll likely end up going in. Schwartz kind of summed up their frustrations with Lisa perfectly when he joked, "We're not having idea sex, but we're having idea foreplay."

Considering that there hasn't been much progress, what will the future hold for Tom Tom? Could there still be a potential spin-off there? It already has all of the makings of a great show: established personalities, a hot new scene, and, of course, some pre-existing behind-the-scenes drama. Sandoval's girlfriend Ariana is a big proponent of the idea and fans would likely be down for it, too.

During her appearance on the Everything Iconic With Danny Pellegrino podcast, Ariana said that a Tom Tom spin-off would be a solid bet. "I think a spinoff show about Tom Tom would be great because Lisa and Ken would still be involved but then you would have Tom and Tom as the seniors and then you’d have all these fresh faces being servers.” Now, Schwartz, Sandoval, and Lisa need to get it together to actually make Tom Tom a thing, and the cameras can start rolling.

So, in case you were looking to head to Tom Tom anytime soon, you may be in for a bit of a wait. Based on the comments during the Pump Rules reunion, the crew still needs to hammer a few things out before they're able to serve all of those fancy, inspired cocktails that the guys have dreamed up.