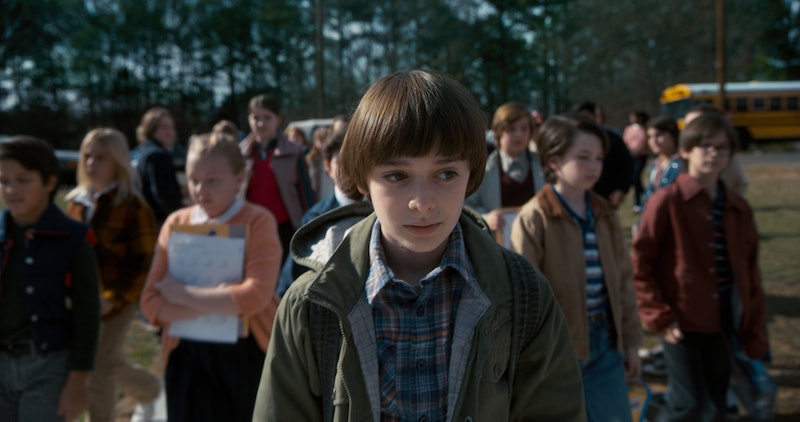 When Stranger Things premiered in 2016, it quickly wormed its way into culture, creating instantly recognizable characters and bringing meaning to phrases like "The Upside Down." One of Stranger Things most recognizable creations, The Demogorgon, was named after a monster in Dungeons & Dragons, and that trend has continued in Season 2. When faced with the unknowable, Dustin, Mike, Lucas, and Will refer to their encyclopedic knowledge of D&D to give meaning to creepy monsters or odd phenomena. The boys of Stranger Things proclaim that Will has "Truesight," but what is that — and is it a power or a curse?

Since Will has returned to Hawkins, Indiana from The Upside Down, he's been hopping back and forth between the two places — usually whenever his PTSD is triggered. Whenever he has "truesight," Will ends up roaming around the Upside Down, where he sees a massive shadowy monster looming over the town of Hawkins. Mike tells Will that his ability to look into another world may be a good thing, but getting thrust into a terrifying alternate dimension filled with monsters doesn't seem to be Will's idea of a good time. However, when looking at the actual definition of truesight as listed in the Dungeons & Dragons handbook, more is revealed.

In the Player's Handbook for the 5th Edition of Dungeons & Dragons, Truesight is explained as not a spell, but a power that some creatures have:

A creature with truesight can, out to a specific range, see in normal and magical darkness, see invisible creatures and objects, automatically detect visual illusions and succeed on saving throws against them, and perceives the original form of a shapechanger or a creature that is transformed by magic. Furthermore, the creature can see into the Ethereal Plane.

A misty, fog-bound dimension that is sometimes described as a great ocean. Its shores, called the Border Ethereal, overlap the Material Plane and the Inner Planes, so that every location on those planes has a corresponding location on the Ethereal Plane.

The Material and Inner Planes are, in essence, D&D language for "the real world." By that language, The Ethereal Plane — the foggy land that mirrors real-world locations, is a fitting analogy for The Upside Down. By that logic, truesight is the most accurate encapsulation of Will's momentary shifts between realities.

While truesight may be a handy tool for adventures passing through Phandalin, Waterdeep, or other Dungeons & Dragons locations — Will would likely want to give up his truesight at any moment. Being thrust back into the Upside Down doesn't seem useful for Will as much as it is deeply traumatic and horrifying. While the Ethereal Plane of D&D features "a region of swirling mists and colorful fogs," The Upside Down seems to exist only in horrifying darkness.

The children of Stranger Things have always related to the world around them through Dungeons & Dragons, but, as they grow older, it may be time for them to stop using the role-playing game as a tried-and-true guide to the real terrors haunting Hawkins. There's no handbook to help the kids understand what is going on with the mysterious creatures turning up in Hawkins, or the massive figure that Will is haunted by whenever he visits The Upside Down. Dungeons & Dragons is a fun game, and there's nothing fun about trying to protect your friends and family from an incomprehensible terror — especially when you have real world truesight to contend with.