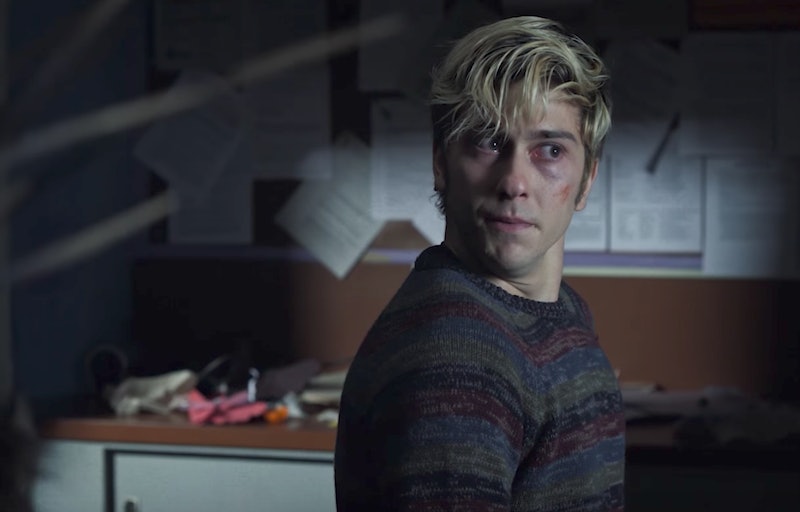 If you've heard of Netflix's new movie Death Note, you probably have some questions. After all, the film is stirring up some serious controversy — but what's up with Death Note, really? Well, first things first, let's establish what the new film actually is — a live-action adaption of a Japanese manga-turned-anime. The original manga was released in 2003, and an anime series followed just three years later. Death Note marks the first American adaptation of the material, as well as the first big live-action movie. Got it? Good, because it's about to get complicated.

Death Note is about a disaffected teenager, Light Turner (Nat Wolff), whose life is changed when he stumbles upon the Death Note, a magical notebook that gives him the power to kill others without getting his hands dirty. All he has to do is write a name in the book, and that person will die. As Light becomes infatuated with the power to kill, he gains the attention of Mia (Margaret Qualley), a cheerleader with a dark side. The two decide to use the Death Note to create a god-like persona by killing terrorists and mass murderers across the world, taking credit under the pseudonym Kira. Their high-profile mass murderer soon gets the attention of Interpol detective L (Lakeith Stanfield), and the rest, as they say, is history.

So, now that we've got the basics of the plot down, let's move on to the nitty gritty.

What Is The Death Note And How Does It Work?

The Death Note is a notebook that belongs to Ryuk (Willem Dafoe), a Shinigami — a death spirit (ghost, demon, god, however you want to call him). Whoever is in possession of the book has the power to end their life with a simple stroke of the pen. Write the full name of who you want to kill in the Death Note while visualizing their faces, and Ryuk will do the rest. This is why it's important for L, the detective, to remain "L." He covers his face for most of the film, and his name is a well-kept secret (you'll see why in the movie), which makes him safe from Light's reach.

You can even decide how someone will die and when (as long as it's timely), and in some cases you can write down a person's actions prior to their death. For example, if you want someone to steal money from a bank against their will, just write it in the book, along with their subsequent death, and they'll do it. The Death Note is powerful, but it's also complicated, with countless rules that dictate how it can be used. Then there's Ryuk, who clearly wants to use the notebook to cause maximum destruction and chaos. In Death Note, the death spirit first seems to be on Light's side, but it quickly becomes clear that he's only out for himself.

If It's An Anime Adaptation, Why Is It Set In America?

Well, this is a complicated question. For starters, the movie was never supposed to be set in Japan, but was always meant to be an American interpretation of the Death Note story. "In the early stages of the film I was reading all of the manga, really just looking at, 'How does any of this translate to the United States?'" director Adam Wingard said in an interview with IGN. In other words, this movie was never meant to be Japanese in any way. The movie does keep some connections to Japan, however. Kira, for example, is a play on words in Japanese that sounds like the word for "killer" and is used in the movie as a way to misdirect the authorities.

Death Note has been surrounded by accusations of whitewashing since Wolff, a white actor, was cast in the lead role. Traditionally, the casting of a white actor in a role originally written as another race or ethnicity — in this case a Japanese boy — is, in fact, called whitewashing. However, filmmakers have pushed back on that particular critique, saying that they didn't whitewash the main characters because these main characters are American, not Japanese.

"It's not just taking a character and trying to say a white kid is a Japanese kid. It is a whole new thing," Wingard told Vulture at the Death Note premiere. "The characters are all very different and it is a different kind of experience all together." Producer Masi Oka agreed, telling Vulture, "The whole idea of whitewashing is putting white people in roles that were meant to be a different race. But this wasn't specifically a racially bound story, because it was set in America."

So, Death Note might not be guilty of explicit whitewashing, but it is notable that the film features no prominent American characters, and a majority of the film's leads are white, save for Stanfield. "Saying 'whitewashing' is also somewhat offensive," producer Roy Lee told Buzzfeed, citing that "one of our three leads is African-American." I'll let you decide if that defense actually means anything. The bottom line, though, is that Death Note is certainly a missed opportunity for more Asian representation in Hollywood.

Now that you've got all the answers, the only thing you have to decide is whether or not you want to give Death Note a try.