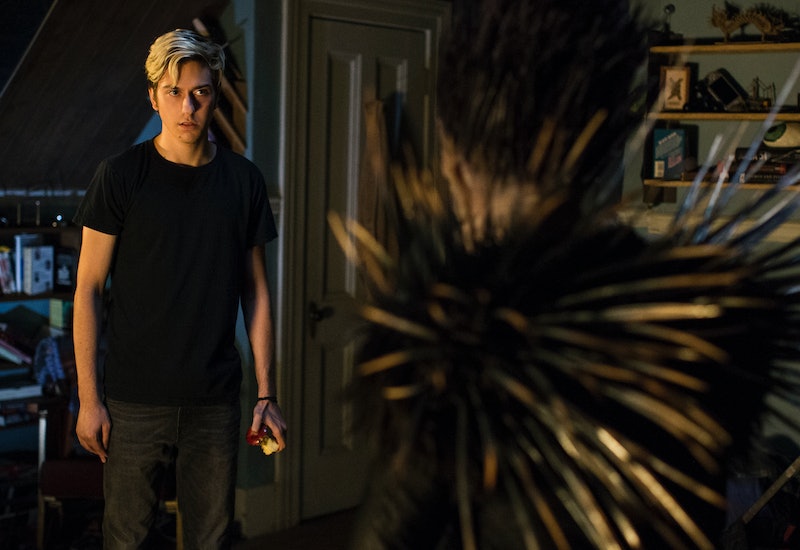 As Netflix continues to dive into the world of original content, it's setting itself up for some serious debate. Recently, the site's new anime-inspired movie, Death Note, has been the subject of some controversy, with fans of the original accusing the filmmakers of whitewashing the Japanese story by casting a white male lead. Speaking with Bustle, Death Note star Lakeith Stanfield, who has a supporting role in the film, defends it against such allegations, calling the film "a re-imagination" set in America.

This defense might sound innocuous, but considering the film's total lack of Asian American characters, it actually contributes to Hollywood's erasure of Asian Americans. Stanfield calls this version of Death Note "the Americanized version," and he's not alone; saying the movie is a U.S.-set take on the story has been a popular line of defense from the filmmakers. At the movie's premiere, producer Roy Lee told Vulture, "We didn't look at race as a factor. We just did the version that was set in the U.S." And technically, that's true; Death Note takes the original manga out of Japan and puts it into the United States, with a setting of Seattle.

But that didn't have to mean that no actors could be Asian Americans. Yet instead of featuring a protagonist named Light Yagami, it's Light Turner as played by white actor Nat Wolff. And L, the mysterious investigator, is played by Stanfield, a black man. The cast is overwhelmingly American, save for two characters — Watari (Paul Nakauchi) and an unnamed detective played by Masi Oka. Coincidentally, the only two Asian characters in the film are notably from Japan. In the world of Netflix's Death Note, Asians seem to only exist outside of America. There are no Asian Americans featured prominently in the film, and a large majority of the film's American characters, including the leads, are white.

Oka, who also is as a producer on the film, has defended Death Note against claims of whitewashing by, again, pointing out its new setting. "This wasn't specifically a racially bound story, because it was set in America," he told Vulture. "Anyone could have played that title role, whether it was white, African-American, Latino-American, or Asian-American." Yes, it's true that Death Note is not the same situation as Ghost in the Shell, which was a Japanese story set in Japan starring a white woman playing a Japanese woman. However, Oka seems to imply that casting directors were open to the possibility of casting an Asian American actor as the lead, while in May, he told Entertainment Weekly that the casting directors sought out Asian actors, but that "the actors we did go to didn't speak perfect English."

Following backlash, Oka explained his comments in an interview with BuzzFeed, saying that he was specifically talking about Asian "actors from Asia." In that same interview, Oka stated that he made an effort to go abroad to audition Asian actors, specifically for the character of L, but in the end was limited by language barriers. "If you can't understand what [he's] saying, I think you lose a little bit of the strength of the character," he said.

In 2015, Asian American actor Edward Zo released a YouTube video claiming that he was told through unofficial channels that the Death Note filmmakers were reportedly not seeing Asian actors for the role of Light. (Bustle has reached out to Death Note representatives about this claim, but has not heard back at this time.) Whether or not the filmmakers did audition Asian American actors for lead roles, the fact remains that the erasure of Asian Americans is all too familiar in Hollywood, where Asians made up only 1 out of every 20 speaking roles, and just 1 percent of all leading roles, according to a 2016 study by the USC Annenberg School for Communication and Journalism. (What percentage of those characters are Asian American is not specified.) It's sad to see a film adapted from Asian art do nothing to change the statistics.

More like this
Emma Corrin Spoke Out Against “Clickbait” Headlines Surrounding Gender Conversations
By El Hunt
The 'Love, Lizzo' Harry Styles Scene Is Just 1 Moment That Made Fans Feel Seen
By Brad Witter
Blake Lively's Reaction To Ryan Reynolds' Dance Video Was Pure Thirst
By Stephanie Topacio Long
You’ll Be Able To Stream Bullet Train Before The Holidays
By Arya Roshanian and Radhika Menon
Get Even More From Bustle — Sign Up For The Newsletter