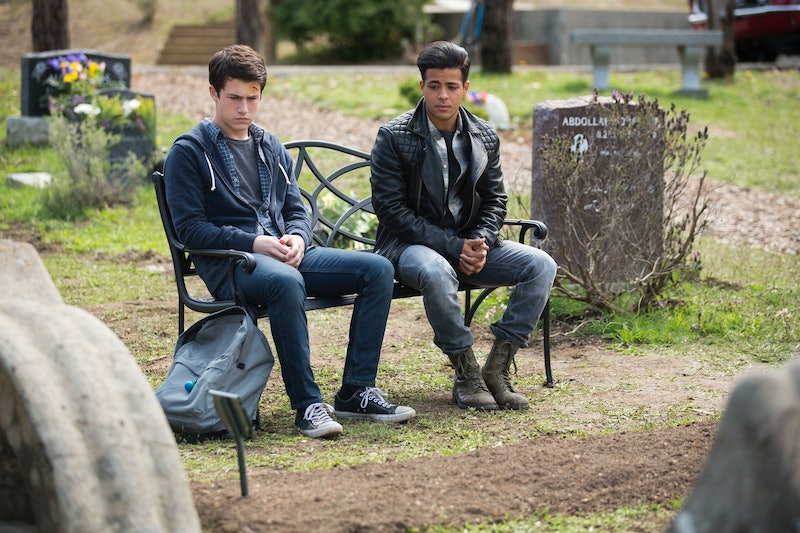 When did you first wonder whether or not Clay Jensen's extraordinarily helpful friend Tony was real? Almost everyone I know has questioned this character, either right off the bat or somewhere in the middle. What's up with Tony on 13 Reasons Why? He's not a guardian angel or a trickster vampire, but he sure acts like one. There are some spoilers for 13 Reasons Why ahead, so hit rewind if you haven't finished the series yet.

Tony received the back-up set of tapes from Hannah and was instructed to watch everyone as they listened and passed them on — but we only really see him interacting with Clay. It's unclear whether or not he got as involved or engaged with the other subjects, but I kind of doubt it.

He's just a little too wise, don't you think? Tony is always right where Clay needs him to be, pulling him out of trouble and encouraging him when he needs it. He's also much more put together than the other high school students, which makes him look and seem older. As the one who introduces both Hannah and Clay to the magic of mix-tapes and analogue technology, he's a man out of time. The fact that he and his brothers were beating up a guy didn't hurt my suspicions about him, either — Fight Club, anyone?

Like many of the characters on 13 Reasons Why, I do recognize the "role" Tony plays in high school. There are plenty of people who are nice enough, but not involved in any activities or seen with any cliques. He's neither a floater nor a loaner. I think Hannah probably knew of him as a friendly acquaintance who was helpful and trustworthy, but nothing more. The kind of person who is approachable, but doesn't seem like they're in the market for new friends.

However, as the story unfolds, Tony begins to crack as well and its clear as can be that that he is not this unaffected spirit guide. While Tony isn't part of the twisted Breakfast Club who received Hannah's tapes because they were one of her reasons, he is implicating himself in almost all of their crimes. Tony didn't give the tapes immediately to the cops, the school, or Hannah's parents as evidence. He also stayed silent about Sheri and Bryce. He supports Clay, but he's not perfect.

Maybe he wanted to wait until Clay got the tapes, so that he would finally have an ally. Maybe he really just wanted to respect Hannah's wishes. Tony finally opens up to his boyfriend Brad, which helps. He finally copies the audio files and gives them to the Bakers, at which point the truth was already beginning to come out. It's just another example of how trying to do the right thing is practically impossible. Someone always gets hurt.

At least Clay called him out for Yoda-ing him too, because it was getting ridiculous. He and Brad got to almost literally ride off into the sunset with Clay and Skye. I'm going to miss Tony now that I'm done with 13 Reasons Why. Every teenager should be blessed with a friend who’s so present, they almost seem magical.