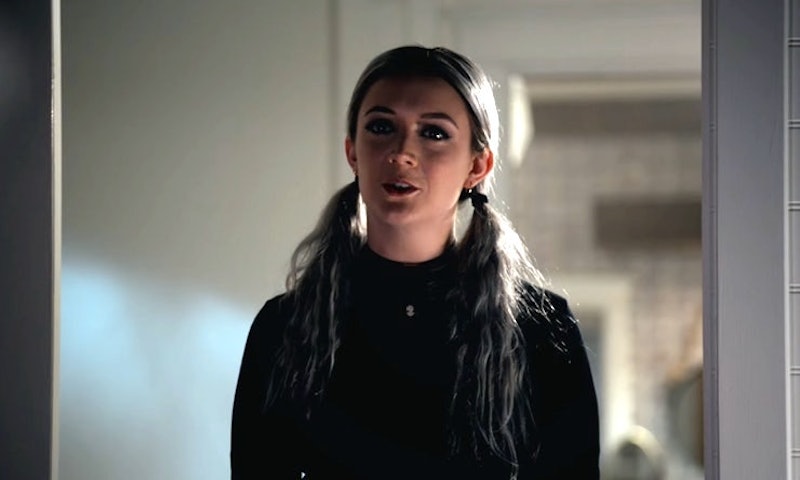 Viewers may still not know exactly what's up with Winter on AHS: Cult or how she's related to Kai, but she is obviously a force to be reckoned with in the Sept. 12 episode, "Don't Be Afraid Of The Dark." Whether Billie Lourd's character is Kai's sister or just his cult follower, she seems to have been tasked with undermining the Mayfair-Richards family from the inside. Feeding off of the fear that both Ally and Oz have, she is presumably unraveling Sarah Paulson's fragile character while simultaneously working on making Oz a member of Kai's cult. And through her manipulation, Winter is gaining power.

Evil nannies who quickly infiltrate a home are nothing new to pop culture, like the classic thriller The Hand That Rocks The Cradle proves. And while Winter's focus as a nanny was just on Ally and Ivy's son in the premiere episode of American Horror Story: Cult, she sets her eyes on Ally in "Don't Be Afraid Of The Dark." After seemingly getting stronger by absorbing Oz's fear while playing the pinky game, Winter is able to ease Ally's phobias and even seduce her in a matter of minutes while her wife is out of the house. While AHS showrunner Ryan Murphy had previously stated that there'd be no supernatural elements in Cult, as Entertainment Weekly reported, it sure appears like Winter has got some mystical abilities. Or are her powers of suggestion just undeniable?

Whether Winter is actually able to feed off of fear or is just skilled at tricking vulnerable people like Oz and Ally isn't clear. But Ally and her phobias are clearly a target for Kai and his cult. With Winter admitting that she dreads children to Kai in the first episode, becoming his nanny is the perfect assignment for her to take, in order to conquer her own fears while exploiting Ally's. Because even though Kai's cult — at least, he appears to be in control — and his intentions haven't been revealed, it seems safe to assume that his and his followers' powers come from making people afraid.

With the introduction of Billy Eichner and Leslie Grossman as Ally and Ivy's neighbors, the Wiltons, who miraculously happen to record Kai's assault and don't mind living in a home where a murder just took place, it seems that Kai is surrounding Ally from all sides. The Wiltons are likely members of Kai's cult, and when they tell Ally the power being cut on their street is a wide-spread terrorist attack, Winter leaves Ally more terrified than ever. As the clowns have also infiltrated Ally's home, all of this seems like a plan orchestrated by the cult to have Ally's fear consume her — and it leads to Ally killing Pedro when he shows up at her door unannounced.

As possibly Kai's sibling, Winter may have more powers than the average cult member. If you're doubtful that Murphy was telling the truth about the lack of supernatural elements in this season, then Winter may also have some magical abilities gained by taking Oz's fear. After all, she is able to soothe Ally like no one else has before. Sure, it could have been the bubble bath soap or Winter's sexual advances (which I definitely don't think come from Winter being legitimately interested in Ally), but there seems to be something particularly calming about Winter's presence right before Ally is plunged into her nightmare situation.

So while Ivy may have thought that Winter being a full-time nanny would be helpful to Ally, it's quite the opposite. Whoever she is, Winter appears to be instrumental in breaking Ally — all as part of Kai's clown cult's design.