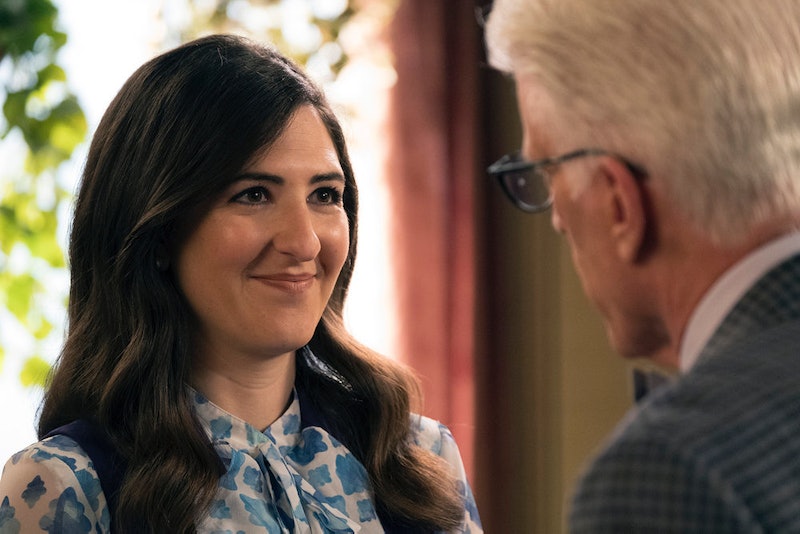 Who would have thought that a Siri-like sentient database theoretically incapable of humanoid feelings would end up giving us all the feels? Something is wrong with Janet on The Good Place in the Oct. 19 episode. Weird stuff is happening now that she's helping Jason and Tahani work on their relationship, which is actually super sad.

Jason suggests that Tahani confide in Janet about their secret hook-ups, and it all goes downhill from there — not for the two members of Team Cockroach, but for their "not a robot" personal assistant. All Janet says is that she would "feel great" about giving Janet and Tahani couple's therapy, and her thumb breaks off and flies into the air like a sad, lost balloon. Janet suggests that this happens because, "I'm operating in a way I'm not designed for, and it's creating a small glitch." But that may not be the whole story.

Is this because Janet is talking about emotions, having them, or lying? Technically, she's not allowed to lie. Maybe deep down in her programming, she knows that she's not actually happy about this blossoming romance. Maybe she remembers that she and Jason used to be married. This definitely has something to do with the not-lady's relationship with Jason in Season 1. Later, when she says she's happy for the two of them, a frog falls out of her mouth. Saying the same thing a month later causes a small earthquake.

At the end of the episode, Janet takes this problem to Michael. "I am wrong," she says. "I can't stop glitching, I don't know why, and it's getting worse. I fear this neighborhood is in danger of total collapse."

Same, girl. We all know what it's like to pretend to be happy for someone, or lie to ourselves, or feel depressed and not quite know the cause — and this is a delightfully bizarre way of representing that pain and confusion. Janet's memory has been erased hundreds of times since then, but a residual something from Michael's original experiment is still deep down in there.

What's interesting is that in Season 1, when Janet "fell" for Jason and exchanged vows with him, so to speak, she didn't glitch. Technically she was operating in a way she was not designed for at that time, too, but it didn't muck up the universe. They were ride or die! That makes it seem as if the glitch happening now is either caused by a negative emotion, or the fact that she is not telling her own truth — which logically shouldn't be possible. How awful!

Then again, what if this is part of some kind of torture devised by Vicky, who is technically in charge of the Bad Place/Good Place experiment? While it would be interesting to see what torturing Janet would accomplish, that twist doesn't seem totally likely. Her Bad Place ideas have been, as Michael complained in a previous episode, pretty basic.

One thing is for sure. Whatever is causing this glitch is going to be the focus of The Good Place for at least the next two episodes, according to their official descriptions. Next Thursday, in "Janet and Michael," technical difficulties occur and "when the Neighborhood experiences a small glitch, Michael has to resolve the issue with Janet before it gets out of control."

He may not be successful, however, as the following episode, "Derek," teases that "Janet creates a big problem for Michael. Meanwhile, Eleanor lets Chidi in on a secret, and Jason puts Tahani in a difficult position." Nevermind who Derek is, this is clearly a big deal. Poor Janet.

There have been a few different versions of Janet on The Good Place so far. There's Bad Janet, cactus-giving reboot Janet, and Michael's existential midlife crisis Janette. Maybe this glitching, emotional Janet is the real deal. Hopefully it means that she and Jason will end up back together. Watching Janet literally break is almost too much to handle.