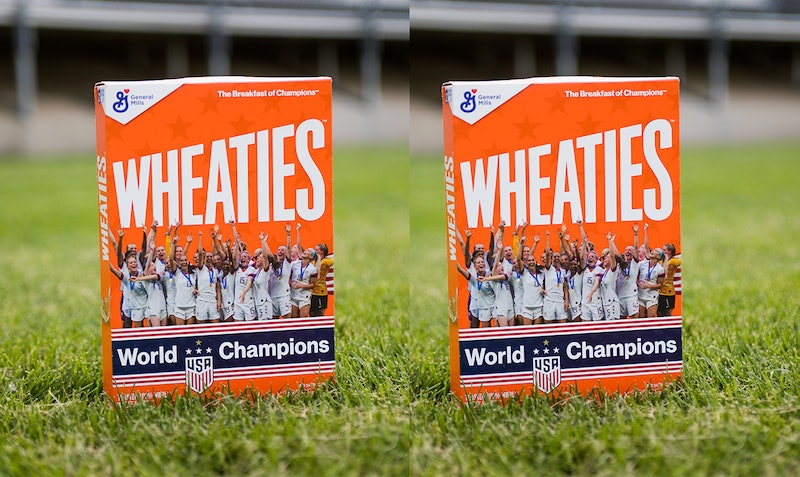 Soccer and cereal fans, listen up. In honor of their fourth world championship title, Wheaties will feature the U.S. Women’s National Soccer Team on a limited-edition box of the General Mills cereal. The team will join a list of other world class athletes who graced the cover of the Wheaties box since the 1950s.

As the U.S. Women’s National Soccer Team kicks off their victory tour this Saturday, August 3, you can participate in the celebration with the limited-edition box sold exclusively through Wheaties.com. The commemorative box comes in partnership with Serena Williams, the decorated tennis star currently on the front of the Wheaties box.

“The USWNT captivated the world this summer. They impressed us all with their incredible accomplishments on the field — and their use of sports as a platform to inspire the next generation of girls,” Serena Williams said in a press release. “I believe a champion embodies a person in all aspects of their life and I am so proud to share my time on the Wheaties box with these amazing women who are doing just that. When we support each other and build each other up, we can do anything.”

You can still get Serena Williams’ Wheaties box at retailers nationwide. However, the U.S. Women’s Soccer Team box will be a limited release, available through online purchase only. Wheaties will release 10,000 USWNT commemorative boxes for a limited time only on Wheaties.com while supplies last.

The boxes are available for $23 each on Wheaties.com, which Wheaties notes is “a nod to the 23 fierce women who are a part of this record-breaking team.” Before you scoff at the price — $23 is a lot for a box of cereal — 100% of the sales will be donated equally to two organizations: Girls in the Game and the U.S. Soccer Girls Development Academy. Note that that’s not just “100% of the profit.” The $23 you’re paying for the commemorative box is a $23 donation to two charitable organizations.

Half of the money will go to Girls in the Game, an organization “dedicated to empowering young girls through fun and active leadership programs.” Their mission, as their website states, is to ensure “every girl finds her voice, discovers her strength and leads with confidence through fun and active sports, health and leadership programs.” You can donate directly to Girls in the Game here.

The additional fifty percent of the money will go to the U.S. Soccer Academy, an organization providing support and education to young soccer players. To learn more about their mission, you can visit USSoccerDA.com.

“It is beyond wonderful to see our team on the cover of the iconic Wheaties box,” Becky Sauerbrunn, USWNT defender, said in a press release. “Not only is it an honor to have our team recognized amongst some of the world’s most renowned athletes, this highlights our 2019 world championship title as more than just a win for the sport of soccer, it supports our drive for women’s equality in all sports.”

While you’re ordering your box of Wheaties, you might want to brush up on the Women’s Soccer Team’s ongoing equal pay lawsuit with the U.S. Soccer federation. There is some conflicting information on just how much the Men’s and Women’s teams make and what exactly “equal pay” would entail.

“In the midst of the World Cup, following news regarding significant revenue generated by the women players, USSF decided it is time to sit down with the players' lawyers,” Molly Levinson, a spokesperson for the 28 players involved in the lawsuit, said according to The Wall Street Journal. “We hope their pledge to submit a proposal to solve the ongoing gender disparities is genuine. It would be truly remarkable for these games to mark the beginning of pay equity. The world is watching.”