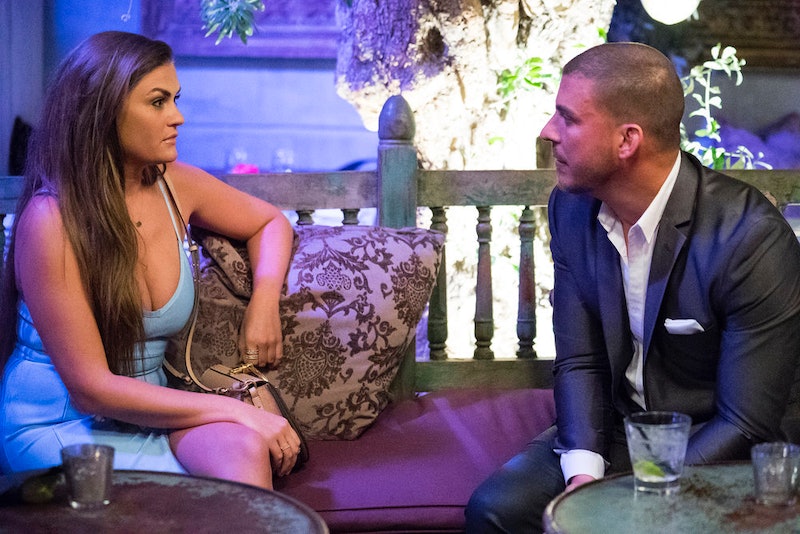 Brittany Cartwright has finally done it — she's getting Vanderpump Rules star Jax Taylor to settle down and move on to the next phase of his life. Their engagement was announced in the summer of 2018, just in time for it to be featured on Vanderpump Season 7 (you know Lisa Vanderpump wasn't about to not televise their engagement and wedding, y'all). And while congratulations are due to the happy couple, fans are likely eager to know exactly when Jax and Brittany are getting married.

This engagement comes after a tumultuous year for the pair. In Season 6 of Vanderpump Rules, Jax admitted to cheating on Brittany with former SUR-ver Faith. There was also a recording of Jax telling Faith that he was never going to marry Brittany and that he wasn't attracted to her, which was played out loud at a party. Brittany was, understandably, furious, and she and Jax briefly broke up before ultimately reuniting and deciding to work out their problems. It must have been hard to see the cheating and then relive the cheating on television, but all is well post-engagement. In July 2018, Brittany told People, "We just have been so happy. I can’t even be upset with him, I can’t stop smiling." Now, the Vanderpump pair is planning their wedding.

Us Weekly reports that Jax and Brittany will be getting married in the summer of 2019 in Brittany's home state of Kentucky. They were originally planning a Malibu wedding, but since so many of Brittany's family members are in Kentucky, Jax and Brittany reportedly decided to make it simpler for them and move the wedding from L.A. Brittany has said previously that she's wanted to get married at the Kentucky Castle in Versailles, Kentucky, and, well, she's getting her wish. Check out this stunning venue:

When it comes to who is actually in the wedding, Brittany still has some deciding to do, though fellow Vanderpump castmates Kristen Doute and Scheana Marie already confirmed they were part of the bridal party. Brittany told People:

Beyond that, it certainly seems like Brittany and Jax are leaning toward a televised wedding. They had their own spinoff show in the summer of 2017, and Jax and Brittany told E!'s Daily Pop that on-screen nuptials could definitely be a possibility. Jax explained that there will be two bachelor parties — one off-camera and one on-camera, to which Brittany said, "Well, we’re hoping on-camera. We don’t know. We haven’t been picked up yet."

There's no specific date yet, but it sure seems like Jax and Brittany's wedding train is moving quickly down the tracks, so if things continue, they'll be headed down the aisle sooner rather than later.