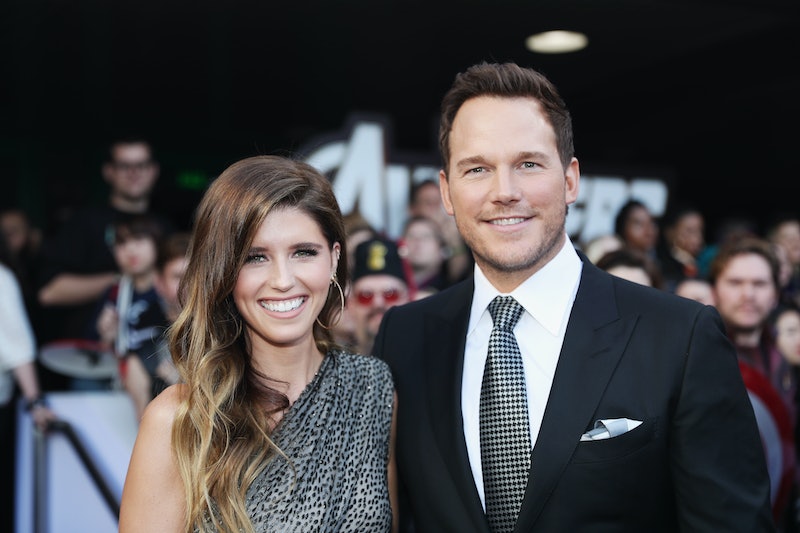 The big day might be just around the corner for these two stars. On Saturday, Katherine Schwarzenegger had a bridal shower to celebrate her upcoming wedding to Chris Pratt, and the event could mean the couple are planning to tie the knot soon. The bride-to-be invited guests to her mother Maria Shriver's home, and was surrounded by close friends and family, according to People. The event was reportedly decorated with tasteful white flowers and candles, with live music playing in the background. A full guest list was not made public, though Oprah Winfrey was reportedly among attendees, and Pratt also stopped by the shower to toast his bride-to-be.

Schwarzenegger and Pratt have not yet revealed a date for their wedding, but the shower could be a hint that the big day will be soon. In February, Pratt opened up about the wedding at the premiere of The Lego Movie 2: The Second Part, as per People. The actor told the publication that they're still working on wedding plans, but while there was no date set, the two were thinking a "fall, winter kind of thing." Given the timing of the party this weekend, it seems like plans might come together in time to make their autumnal nuptials a reality.

It makes sense that Schwarzenegger and Pratt would be taking the wedding plans slow, as the couple have had a whirlwind romance. The two stars were first linked on Father's Day in August of 2018, and were seen out together several more times after in Los Angeles, as per TMZ. Pratt, who most recently appeared in Avengers: Endgame, has had a major couple of years in his acting career. Schwarzenegger is also a successful author and journalist, and managing both of their professional schedules likely further complicates wedding planning.

In January, Pratt and Schwarzenegger got engaged, and revealed the news to fans on social media. The author and lifestyle blogger posted a picture of the engagement ring on Instagram, writing, "My sweet love. Wouldn't want to live this life with anyone but you." Pratt also shared a picture of the ring, writing, "Sweet Katherine, so happy you said yes! I'm thrilled to be marrying you. Proud to live boldly in faith with you. Here we go!"

In March, Schwarzenegger revealed the couple had begun wedding planning, according to Entertainment Tonight. The author noted her fiancé was very involved in the process. "I mean, I feel like we're all really involved in wedding planning," she told the publication. "I'm very involved, Chris is very involved so it's a great combination of everything and just a really exciting and fun time.” The star added that she couldn't be happier following the engagement. "I'm very happy in all areas of my life and I feel really blessed and really lucky,” she said.

Pratt and Schwarzenegger have shared relationship updates on social media in the past, but it looks like the two stars opted to keep the wedding shower a private affair. According to People, the party was an intimate gathering with fun games, a flower station, and a gospel choir. The publication also noted that the bride-to-be also wore a long white dress with flowers in her hair. Pratt reportedly gave a heartfelt toast about Schwarzenegger, and several of the other guests offered kind words about the happy couple as well.

Given the couple's past statements and the timing of the wedding shower, it's very possible these two will get married in fall or winter after all. Though the stars have posted candid pictures online in the past, it seems the plan is to keep the wedding festivities private. Even though fans didn't get a glimpse of the couple at the shower together on social media, it's still so clear these two are super happy together.