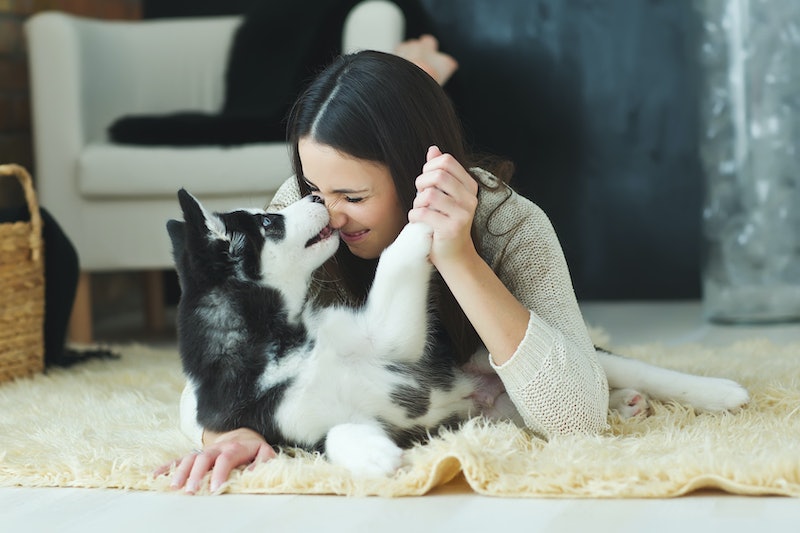 Love puppies? Join the rest of the human world. As memes every day attest, we're deeply invested as a species in the cuteness of dogs, particularly when they're small. Puppies are hugely popular pets (even if owning them means training them, which can be tough) — and, now a scientist from Arizona State University has figured out that there's actually a peak time in a dog's life when we find it cutest, and it's linked to how much the dog needs human assistance.

Dogs are hugely bonded to the human race and have been evolving as our companions for tens of thousands of years. There's evidence that humans "owned" domesticated dogs as long as 14,000 years ago, and we kept them around for good reason: dogs guard our resources, keep our other animals safe, help round up strays and find lost people, and are excellent friends. And that hasn't been a one-way street. We've also evolved in ways that are helpful for dog-kind, and that, according to this new data, includes how cute we find them.

"Cuteness" is a highly relative trait, but in many animals, including both puppies and humans, it's related to the caregiver instinct. In 1943, a scientist called Konrad Lorenz discovered the physical characteristics that humans think are "adorable" — big heads, huge eyes low in the face, chubby cheeks and limbs — and theorized that we've evolved to love these things because it makes us less likely to abandon our babies. Harsh but true: if your biological response to a baby is "aww," it's probable you're going to want to take care of it. Which is important, because human babies are useless and can't care for themselves at all. Without the aid of that biological "aww," they'd die.

The Arizona State data draws on the same idea: that cuteness is a kind of survival trait that bonds humans and dogs. Fifty-one participants looked at photographs of three dog breeds, Jack Russells, cane corsos and white shepherds, which all look quite different as they grow. They were shown images of the dogs from birth to their "teen" years, and the results were as you'd probably expect. Just-born puppies are kind of gross— they can't see, they have barely any fur, and they're not really identifiable as dogs — so people rated them as pretty un-cute.

But the puppies gained in cuteness points as they aged, reaching their "optimal cuteness" at around ten weeks before declining a bit as they hit adulthood. And you'll notice that puppy cuteness is a bit like human cuteness. Puppies are at their most appealing when they have the most "Lorenz characteristics": round faces and bodies, and big eyes proportionate to their size.

The interesting thing about this is that the ten-week mark is about the point where puppies are weaned by their mothers and left to fend for themselves. It's the time in their lives when they become most vulnerable and need people to feed and care for them. Puppies are typically rehomed at between eight and 12 weeks, when they're independent enough to be able to learn new behaviors and bond with owners. Separating them from their mothers before they're weaned is a recipe for trouble — and, as this experiment shows, actually goes against biological impulse. Wait until a pup is at its "peak cuteness," and you'll be bonding with it at the time when it needs a human companion the most.

Just because puppies are mega-cute, though, doesn't mean that older dogs don't need adopting too. In fact, they're at a disadvantage, because they might not have the immediate "aww" appeal of smaller fluffballs, but they're just as dependent on human love and care to help them flourish. So don't be surprised if you fall for a 10-week old puppy next time you're at a shelter — but give time to those big gorgeous adult pooches too. They're much less likely to chew your stuff, for one.