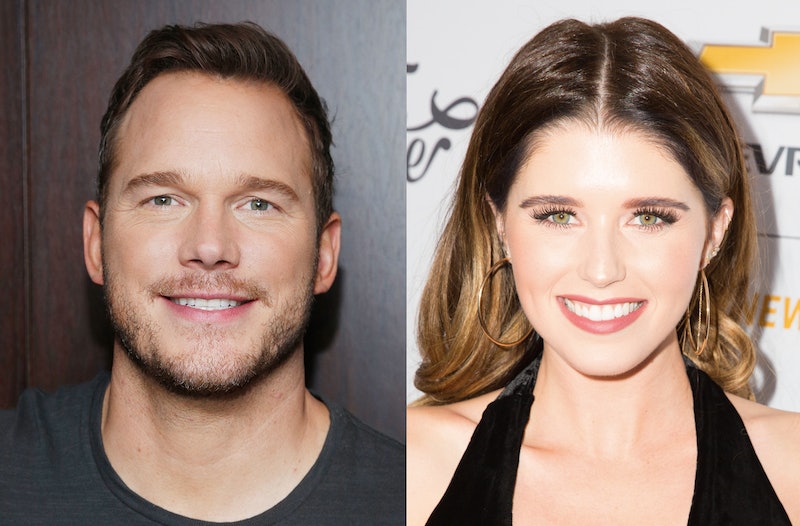 Congratulations to the future Mr. and Mrs. Pratt. That's right, Chris Pratt and Katherine Schwarzenegger are engaged. That seems like it happened pretty quickly, right? Fans may be wondering when Pratt and Schwarzenegger started dating, since it kind of feels like it was just yesterday.

Of course, it's a little unclear exactly when they started dating. However, the duo was spotted for the first time together in Santa Barbara, California for a Father's Day picnic in June 2018. People obtained photos of the picnic date. It's doubtful that they would have such a public first date (on a holiday no less!), so they most likely started seeing each other before that time.

According to a source in a June 2018 People article, Schwarzenegger's mom Maria Shriver is the one who set them up. The same source confirmed that the pair had been on "multiple dates" before their very public Father's Day outing. Then in August 2018, Daily Mail published photos of the couple riding bikes together in Santa Monica, California.

It really seemed like the couple was getting serious when TMZ cameras spotted them together on Halloween 2018. They took Pratt's son Jack trick-or-treating along with his ex-wife Anna Faris and her boyfriend Michael Barrett. Talk about #CoparentingGoals.

That wasn't their only double date, though. In November, Us Weekly shared photos of Pratt and Schwarzenegger out to eat with her father Arnold and his girlfriend Heather Milligan.

After several public outings together and with their family members, it was clear that these two were dating. However, their relationship finally became Instagram official on her birthday in December. The Jurassic World actor posted a collage of pictures in her honor. Along with the pictures, he wrote,

"Happy Birthday Chief! Your smile lights up the room. I’ve cherished our time together. Thrilled God put you in my life. Thankful for the laughs, kisses, talks, hikes, love and care."

That same month, the lovebirds vacationed together in Cabo San Lucas, Mexico to ring in the new year. TMZ shared photos of the trip, which also included Schwarzenegger's brother Patrick and her mom Maria along with other family members.

On Jan. 11, Pratt posted a video of himself moving boxes and unloading them into a car. He enthusiastically raved about how much he "loves moving." The actor did not mention Schwarzenegger in the video, but People reported that Pratt was actually helping move her out of her place. Was she moving in with him? That is unclear, but it is possible since they're now engaged.

And that bring us to Jan. 14. Pratt posted a photo of him with Schwarzenegger rocking a shiny engagement ring. As if that wasn't a dead giveaway of their new romantic status, he wrote, "Sweet Katherine, so happy you said yes! I’m thrilled to be marrying you. Proud to live boldly in faith with you. Here we go!"

It seems like their relationship moved pretty quickly, but by celebrity standards, they've basically been together for decades. Now their fans just want to know when they will tie the knot.