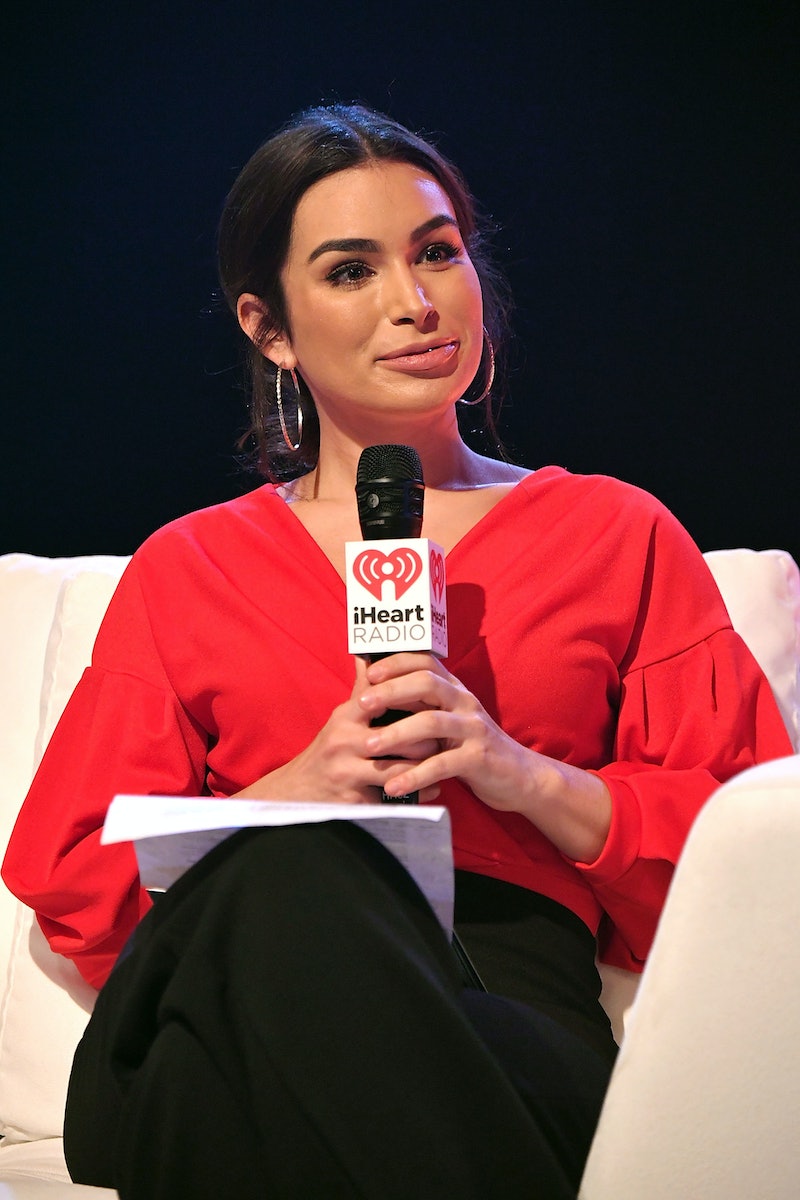 Becca Kufrin's Bachelorette run kicked into high gear Monday night, with Week 2 ushering in the season's inaugural round of group dates. Suffice to say, a lot went down over the course of the episode, including but not limited to a confession from contestant Colton Underwood, who told Becca that he'd recently dated Tia Booth, her friend and fellow Bachelor alum from Arie's season. In the aftermath of his reveal, fans are wondering: When did Colton and Tia break up? Bachelor alum Ashley Iaconetti weighed in on that particular issue during an Access Live appearance Tuesday morning. And, judging by her comments, she seems to think the timing (and the whole relationship, really) is a little questionable.

"If you remember, before Becca got dumped by Arie, Tia was probably the frontrunner to be the Bachelorette," Ashley I. told Access Live's Kit Hoover and Natalie Morales. "So it's interesting that [Colton] was canoodling with her." Elaborating on that point, the Bachelor alum said it was the timing of Colton and Tia's apparently short-lived romance that seemed like the most glaring red flag. As she continued on to explain, "January tends to be the time where casting limits the guys down to about 50, 25. You really get that final call early February."

January, as those who watched Monday night's Bachelorette episode will probably remember, is also the month Colton and Tia supposedly began and ended their weekend-long tryst. Or, at least, that's what he told Becca during the latter half of Monday night's Bachelorette episode, following group date No. 2's enthusiastic round of trampoline dodgeball. "Prior coming onto this in January, I had a relationship with Tia," Colton told Becca, once they were alone together. "And I wanted to make sure to explain, sort of, that we had a weekend together and we had a good time. But for me, the timing wasn't right to grow what was a spark into a flame."

Ashley I. mostly seemed to take issue with the way Colton phrased that last comment on "bad timing" as his primary rationale for abandoning the "spark" he'd supposedly found with Tia. Following her logic, that certainly makes sense. Because, as she explained, if Colton broke it off with Tia right around the same time the show was making its final picks for this season's Bachelorette contestants, perhaps that means the two events were somehow connected. As to the nature of that connection? Ashley I. has a theory. She told Access Live:

"When he tells Becca that the timing with Tia wasn't right, it's like, 'Yeah, the timing wasn't right because you'd prefer to be on the show dating the Bachelorette, [rather] than a runner-up.'"

Of course, this stands in pretty much direct opposition to the way Colton framed the fleeting love affair when he came clean about it during Monday night's exceedingly dramatic episode. "If my feelings [for Tia] were strong enough, I wouldn't have came on [the show]," he told Becca. "And I think that, what I know of you, we could have a ton, whereas it wasn't there with her."

But it sounds like Ashley I. still wasn't buying it. "You know, he tries to insist that it was only a weekend thing and that he didn't have strong enough feelings," though her tone suggests she might not be totally sold on his explanation. That makes sense, too, especially given that the Bachelorette herself didn't sound totally sold on it either during her conversation with Colton Monday night.

"I'm not going to lie — I don't know how I feel about it," Becca said, pretty visibly blindsided by his admission. And, while she told Colton that she's "very attracted" to him and feels like they might have a lot in common, she also made it clear that the news didn't sit too well with her. "It makes me feel a little bit sick," she said of the Bachelorette hopeful's previous relationship with Tia, adding that the newfound knowledge "puts [her] in a very strange position."

Those who watched Monday night's Bachelorette episode know that Becca didn't send Colton home after that conversation. For everyone wondering why, the Bachelorette shed a bit more light on what exactly was going through her head when she learned about the Colton-Tia situation in a new blog post for People recapping the latest episode. "The first thing I wanted to do was send him straight home," Becca wrote, adding that her friendship with Tia means the world to her. So, why didn't she? Continuing the blog post, Becca explained,

"The fact of the matter is I was really drawn to Colton for reasons other than just our chemistry and how impressed I was with his charity for Cystic Fibrosis. I felt like there was an invisible pull, something that in my gut told me to not discount our spark."

And, at the end of the day, that's what we love about Becca: She knows what does and doesn't feel right to her and, rightfully, makes her decisions accordingly. So, while Ashley I.'s suspicions about Colton's motives might very well be on-point, the most important thing is that Becca continues to speak her mind, trust her gut, and follow her heart. If that somehow leads her to Colton in the end, then perhaps Bachelor Nation will just have to trust she knows what she's doing.