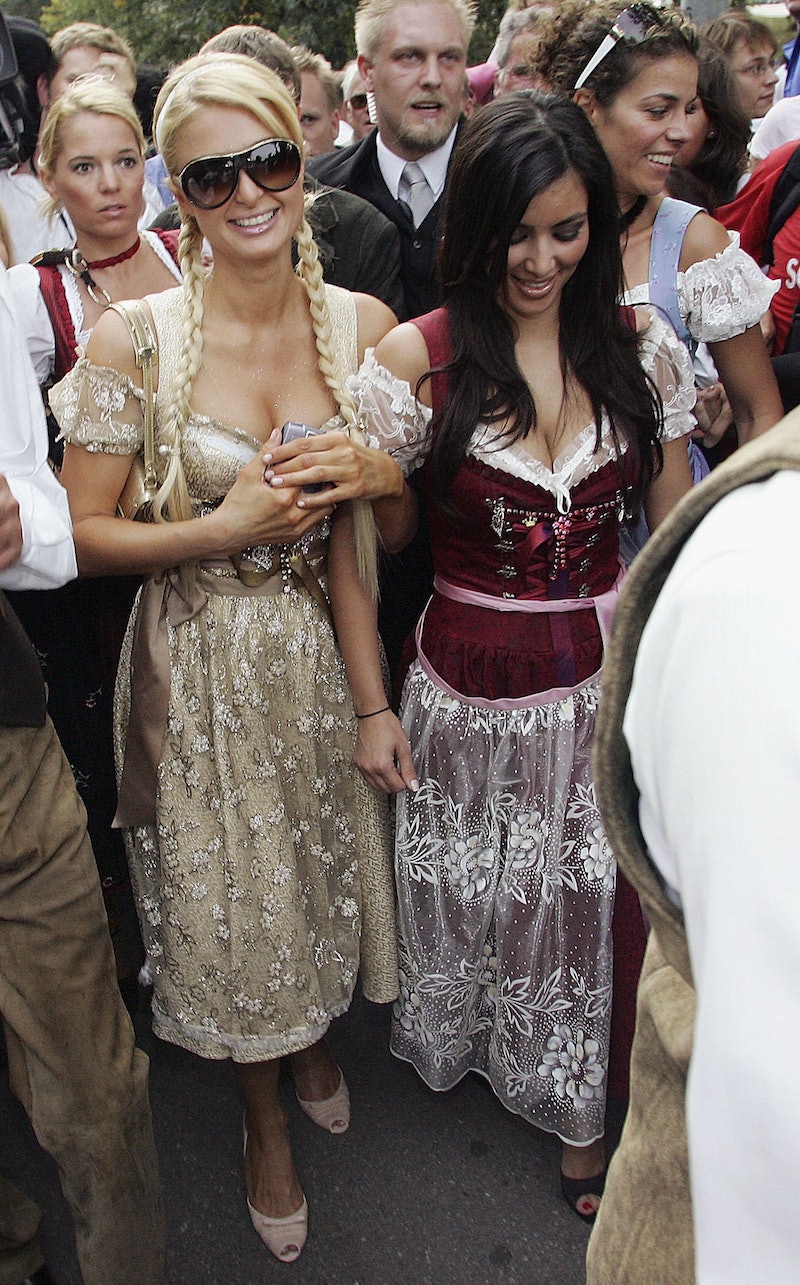 One of the greatest mysteries of the early 2000s is Paris Hilton. Tall, blonde, and a fan of cartoonish accessories, the hotel heiress and socialite redefined what it meant to be famous in the early-mid aughts. It's also entirely possible that without Hilton, people would never know the name Kim Kardashian. But how did Paris Hilton and Kim Kardashian meet? The answer is as simple (and complicated) as being well-off in Los Angeles.

From 2003 until 2005, Hilton starred on The Simple Life with then-BFF, Nicole Richie. Richie and Kardashian had gone to school together in their youth, though at that point, Kardashian was working for Hilton as an assistant and stylist. Years later, memes would spring up all over Twitter, depicting Kardashian as completing menial tasks on Hilton's behalf on the The Simple Life (co-created by Mary-Ellis Bunim), often silly enough to appear photoshopped. Though Hilton's early life was split between the East and West Coasts, she once told Yahoo News that she had known Kardashian since they were "little girls." But how? They didn't attend schools together, and neither are close with former mutual pal Richie today. Unless someone comes forward with ancient home video of the two shaking hands at a birthday party, it's likely they just met by running in the same affluent social circles.

Kardashian and Hilton are a unique example of celebrity. Hilton is among the more recent examples of seemingly "famous for being famous," and attaching Kardashian's star to hers ushered in the next era of that. Keeping Up With The Kardashians was only made possible by Kris Jenner, who sold her "Modern-day Brady Bunch" show on daughter Kim's newfound notoriety. Jenner's middle daughter stepped out of Hilton's shadow around the same time, embarking on a career that no one would see coming. As Hilton's television series ended and U.S. interest in her image waned, Hilton began a new career abroad. She went on to film reality shows about the search for a new best friend, shot a few movie roles, and eventually became a D.J. The older, more grown-up Paris Hilton is still working as a DJ, releases fragrances under her name, and is happily engaged. Her social media presence is gently self-mocking and often hilarious. The turbulent, tabloid image of her is long gone.

As Hilton moved on to an international audience, the Jenner and Kardashian family moved right in to the spotlight. Eldest sister Kourtney participated in a Simple Life spinoff with fellow celebrity debutante Britney Gastineau, while middle sister Kim capitalized on her fame by modeling, making trade show appearances, and having her mom broker endorsement deals. Hilton and Kim Kardashian went from acquaintances in childhood to employer-employee in their early '20s, then moved on to legitimate friends before ultimately being painted as media rivals. Now older and more mature, it seems the two have reconnected, and that's a good thing. Recently, Hilton said that she would invite Kardashian to her upcoming wedding, which is a good sign for these former best friends. Trying to pit successful, independent women superstars against one another is so tired.

So, it's difficult to pinpoint exactly when Paris Hilton met Kim Kardashian. They might not even know for sure. No matter what, though, their legacies are intact. They're both dedicated, hardworking, awe-inspiring, honest, and hilarious celebrity legends that breathed new life into "famous for being famous" — and then accomplished many things to support that fame. No matter what petty meme Instagram tries to resurrect, or whatever rivalry someone tries to instigate on Twitter, Hilton and Kardashian are media icons that changed the game (and are here to stay).