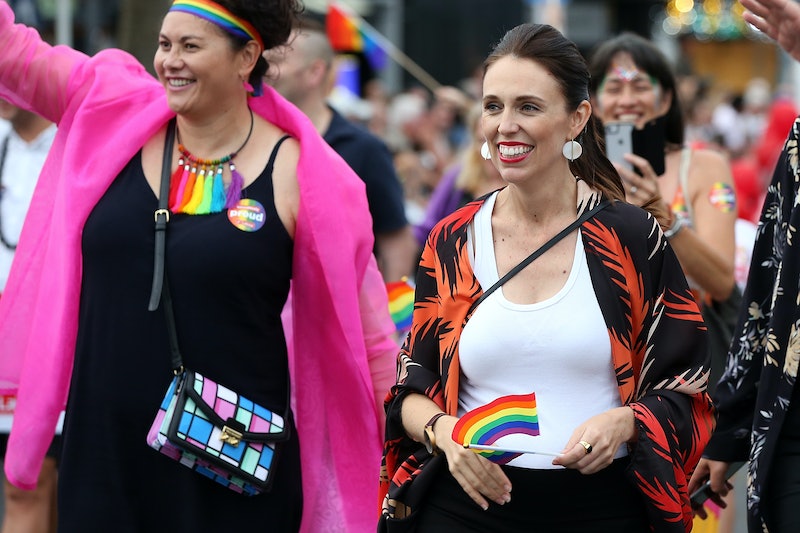 June is LGBTQ+ Pride Month, and celebrations have been underway since the beginning of June. If you're not in the know, and you're wondering when Pride parades start, there's several every weekend this month. Never been? You're missing out. Pride parades provide an overwhelming sense of community, the freedom to be yourself, an opportunity to make new friends, and the best floats and performances you'll ever get a chance to see.

If you're part of the LGBTQ+ community, but you haven't gotten to know other members of the squad, a Pride parade is where you can find your tribe. "If you’re more of an introvert, or if you don’t have a ton of time or opportunities for meetups, a gay pride parade is the perfect place to be among cool, supportive folks who know what you’re going through," Astroglide wrote on its blog.

Though June is halfway over, there are still plenty of opportunities to attend a Pride parade. The International Gay & Lesbian Travel Association has a global calendar of Pride parades and events listed by city and date so you can find one that's near you. If you're traveling, and you're looking to connect with the LGBTQ+ community, the Pride calendar can help make it happen.

"Most gay pride parades and events also occur during a peak season of the year when the weather most ideal, yet another reason to book your trip during the event," IGLTA noted on its website. "Whether traveling alone, with friends or family, visiting during a gay pride event can be a fun way to experience a new destination and IGLTA can help you find LGBTQ-friendly business in almost any location to help make you trip memorable, safe, and exciting."

New York's first Pride parade took place one year and one day after the historic 1969 police raid on the Stonewall Inn, which is widely known as the event that sparked the LGBTQ+ civil rights movement. The Stonewall Inn is now the site of a national monument, the New York Times reported.

Now, 48 years after the first NYC Pride parade, the celebration has evolved into a month of events around the city. If you're nearby, this weekend is not to be missed. What's more, if your city feels dark and drab, attending a Pride parade can give you a fresh perspective because you'll get a chance to view your city through rainbow-colored glasses.

"The world just seems to light up a little during a gay pride parade. The same streets you might walk down every day to get to work or your favorite coffee shop are now bursting with pride, colorful, and celebratory," Astroglide wrote.

"Locals you may have never met, along with businesses you never knew were passionate about the cause, are all turning out in support of LGBT pride and equality. Ribbons are streaming, confetti is flung and like we mentioned earlier, there’s glitter, and glitz aplenty."

It's never too late to attend your first Pride parade. One man named Martin went to his first parade at age 86. In a YouTube video of his experience, Martin said that he was so inspired that he teamed up with 5 Gum for the #NoRegrets Project, which is giving away $250,000 this summer to help people across the U.S. live a regret-free life. If you want the skinny on the project, you can learn how to enter by reading the official rules.

If you've missed the Pride parades near you this year, watching Martin's video will give you enough feels to carry you through until next year. In the meantime, you can learn about other Pride events year round by accessing the IGLTA global pride calendar. And, wherever your travels take you, don't forget to bring your glitter. Because, Pride!