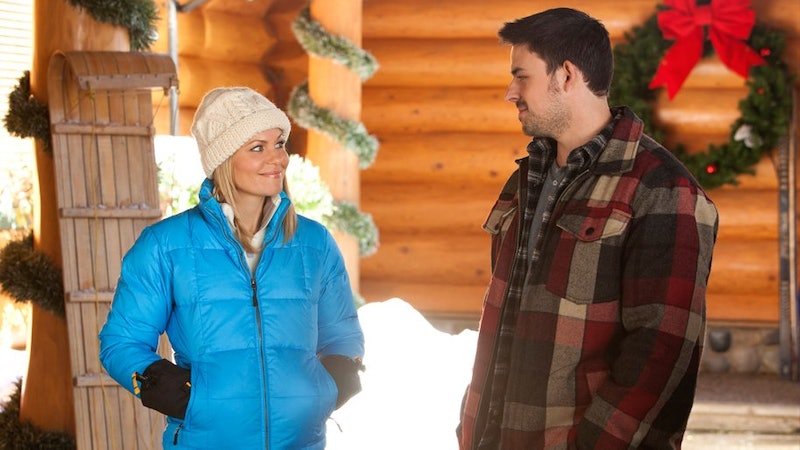 We're officially at the start of spring, but for some people that just means we're a few months closer to the Most Wonderful Time Of The Year: Christmas. Santa must have noticed 2018 thus far has been rough for most folks, because there's already a massive present waiting under the tree. Breaking its own 2017 record, Hallmark announced 34 original Christmas movies for 2018 as part of the Countdown To Christmas mega-celebration, and you're going to want to see all of them.

When it comes to holiday movies, Hallmark doesn't just talk the talk, it walks the walk — or rather, braves the weather. After having to cancel a promotional event due to winter storm Toby, the Hallmark team took to the snow-laden streets in reindeer and Santa costumes to make the official announcement about the upcoming slate of movies.

But it was well worth the extra effort. The Hallmark Channel proper will air 22 new Xmas films, with sister channel Hallmark Movies And Mysteries airing another 12. So far, there's limited word on what the films will be, but according to Entertainment Weekly, one, tentatively titled Vet, will star ER and Life Goes On actor Kellie Martin in "an emotional story of heroism and homecoming." Danica McKellar, best known for playing Winnie in The Wonder Years, will also star in one of the films, and joined the Hallmark team in the snow to announce the Christmas cheer.

It's not official yet, but chances are good that Candace "Queen of Christmas" Cameron will also make at least one appearance in the originals. Best known outside Hallmark for her role as Full House's DJ Tanner, Cameron is the star of Hallmark's ongoing Aurora Teagarden Mysteries, and has appeared in four separate Hallmark Christmas original films so far.

Cameron also made an appearance in the announcement spot, but just to note she'll announce the winning film of the Hallmark Christmas Movie Bracket, an ongoing contest to decide which existing holiday movie is the ultimate in Christmas cheer. The contest is ongoing, so if you'd like to participate, you can check out all the details here. Winners from the first round will be announced Monday, March 26.

The team also announced their official partnership with Five For Fighting's singer/songwriter John Ondrasik for at least one original movie based on the themes and ideas of his single "Christmas Every Day." Let's be real — the odds of that also being the movie title are very, very high.

Unlike previous years, neither channel will air new movies during the summer, instead re-airing previous years' Christmas classics. Hallmark Channel will begin airing all-new films starting Oct. 27, turning the spookiest time of year into a winter wonderland as they begin their Countdown To Christmas programming. Hallmark Movies And Mysteries will start airing their “Most Wonderful Movies of Christmas” a little later, starting Nov. 4.

If you're wondering how the heck one company could possibly make that many movies in time for the holidays, Country Living offers some insight. The films are shot quickly, with some starting only a month before the proposed air date. With no new Christmas movies slated for summer, that gives the Hallmark crews nearly seven months to crank out films. As old-hand Hallmark actor Lacey Chabert told Country Living, "It's intense — it's hard to make a movie in 15 days."

That's about five films per month — pretty impressive, and potentially expensive. But most of these movies have a budget of about two million dollars, the cost of some individual TV episodes. And there's a major no-no on snow being the focus, as the magic of falling snow is too expensive to center a movie around, especially when you're filming through spring and summer.

The only thing Hallmark really has to worry about is running out of cute small villages to film in. To Country Living, production manager Jamie Lake noted "every movie wants that small, cute town and there's only so many small, cute towns within driving distance of the film zone." Location scouts are probably going to feel like grinches after this blitz of films, but for everyone else, it looks like it'll be a very merry Christmas, indeed.