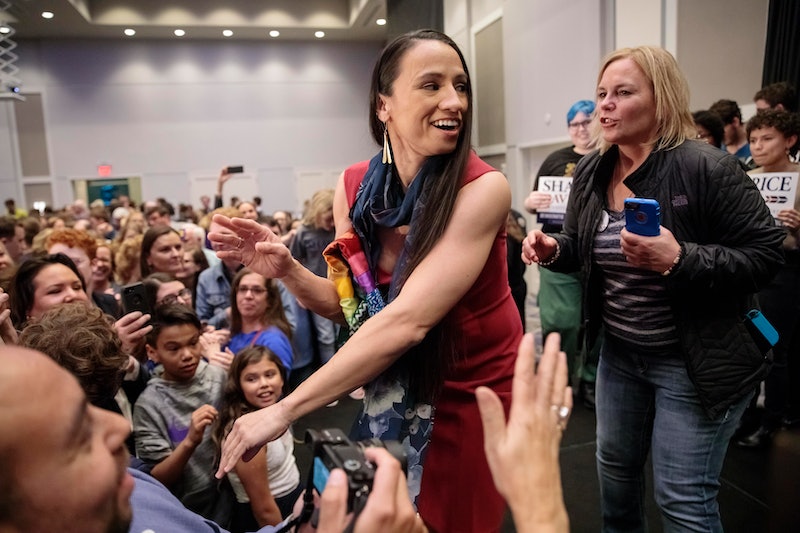 The 2018 midterm votes aren't all finished being counted yet — but it's clear that history's been made in more ways than one. A number of LGBT candidates were elected, the first Native American women to be in Congress were voted in, and Muslim and African American women broke barriers in races across the country. But now that election day has passed, you might find yourself wondering when midterm election winners take office — the answer, at least for congressional winners, is pretty simple.

As stated in the 20th Amendment to the Constitution, the Congress will have its first meeting of the new session on "at noon on the 3rd day of January." It's a little bit more complicated for state legislators, though. According to Ballotpedia, 37 states will have their first state house and Senate meetings after the start of 2019, and 13 states will hold meetings while it's still 2018.

Some states specify a date and time for the beginning of the session, but most indicate something like "the second Wednesday in January" (Colorado, Illinois, Virginia, and Maryland) or "first Wednesday in December" (Maine and New Hampshire). In most states, election results won't be certified until at least late November, if not early December.

Voters this midterm cycle selected the newest members (and some returning members) of government from the most diverse slate ever in American history. According to data from The New York Times, 411 women, people of color, and LGBTQ folks ran this time around. To that end, more openly LGBTQ people were chosen this election than ever before. And for the first time in history, there will be at least 100 women in the House of Representatives. It's not exactly equal, but definitely further along than in the late 1800s, when a few pioneering women ran for office without even having secured the right to vote.

Sharice Davids, an openly gay former White House fellow from Kansas, and Deb Haaland, a community activist in New Mexico, became the first Native American women to be elected to Congress. Ilhan Omar and Rashida Tlaib, both women with Democratic state legislation experience, became the first Muslim women to be elected to federal office. Ayanna Pressley and Jahana Hayes were elected as the first black women to represent Massachusetts and Connecticut, respectively, in Congress.

The new and more diverse array of representatives that voters chose this cycle are primarily limited to the Democratic Party. Across the aisle, Republican members of Congress lean strongly white and male — before the election it was about 75 percent, reported The New York Times, even though white men make up just one-third of the American population.

But for the women and minorities who ran, diversity in elected representatives is crucial to making sure that everyone's voice is heard at the highest level of government. "Listen, I’m not saying vote for me because I’m a black woman," Pressley said at a campaign event over the summer. "But I won’t pretend representation doesn’t matter. It matters."