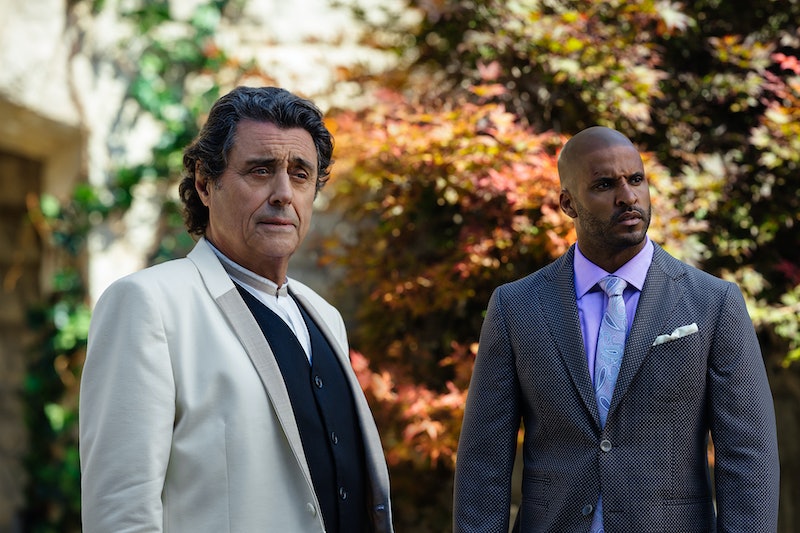 The first season of American Gods shows Mr. Wednesday planning for an upcoming war, but it looks like the show is still pretty far away from reaching even the first battle. American Gods has been patiently taking time away from its core story to explore the lives of other Gods, which has resulted in some truly beautiful storytelling. But it also means that the show has left some central mysteries on the table. Eight episodes is a very light serving for such an epic show, and there's so much more material to explore when Season 2 of American Gods premieres.

American Gods has already been renewed for a second season, surely as a reward to Starz and its fans for their faith in the show. Deadline reports that the new season will premiere in the middle of next year, meaning it'll be a significant wait before fans get to see the beginning of the war between the Old Gods and New. It also means fans will have a year to theorize over the many mysteries that the show is leaving them with. With so many loose threads, here's a quick list of questions the show needs to answer when it returns for Season 2.

Why Does Mr. Wednesday Need Shadow So Badly?

Mr. Wednesday seemed to go through a lot of trouble to get Shadow to become his right-hand man, including getting his wife killed to leave him nothing to go back to. Sure, Shadow can make it snow but it seems like he's not ready to start swinging swords like Mr. Wednesday is. What makes Shadow so special?

Is Shadow A God?

Shadow doesn't do much in American Gods. Things happen to Shadow and he goes along for the ride. For a brief moment in the episode "Head Full Of Snow", however, Shadow is able to cause it to snow – maybe. It's not clear. Between that and the constant images of a Bone Orchard and a Buffalo with flaming eyes running through his head, there's a chance that Shadow is a little more than your average human. If he is a God, however, which one he is is still unclear.

What Are The New And Old Gods Fighting For?

The Old and New Gods are fighting a war – but over what, exactly? Relevancy? Power? What does the winner get? Do the Old Gods even have control over that battle, or is that to be fought by the people themselves who choose what Gods to pray to? How would this all play out?

What Happens To A God When They Are Killed?

Gods live and die by other's belief in them – but what happens when a God takes a sword to the neck like Vulcan? Are they forgotten? If the Old Gods win and Technology Boy dies, will technology stop moving forward? If different parts of the world are attached to these Gods, then the entire foundation of reality as we know it is at stake in this war.

Why Does Mr. Wednesday Keep Lying?

Mr. Wednesday has been lying to Shadow about the real reason that Laura died and generally seems to be pretty un-trustworthy. He's an effective con man, but has Mr. Wednesday been lying about this war the whole time? It seems that he's the only person who actually wants this war to happen, but why is he lying to everyone and manipulating this war into existence in the first place?

What Is The House On The Rock?

Mr. Wednesday seems to be congregating the Gods at The House On The Rock for an Old Gods convention, but what exactly is this mysterious place? More importantly, what will happen when all the Old Gods gather in the same room?

American Gods has left a huge impression in only eight hours of television, creating an unforgettable world that demands to be explored further. Those who can't wait for Season 2 will likely be inspired to pick up a copy of the American Gods novel to see where the story goes, but it looks like the show isn't afraid to go in some wildly different directions. When American Gods returns for Season 2, expect things to get stormy very quickly.