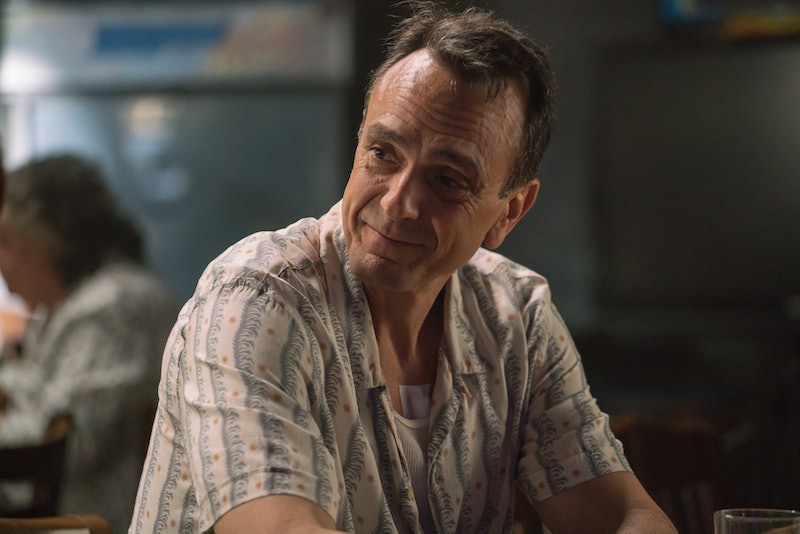 Brockmire, IFC's comedy focused on the life of fictional baseball broadcaster Jim Brockmire, won't be leaving fans hanging after its season finale on June 20. According to Variety, Brockmire has been renewed for two more seasons through the year 2020, and fans and cast alike are rejoicing. As for when Brockmire Season 3 will premiere, the exact date has not been announced. But the first two have both premiered in April of their respective years, so that's likely more or less what viewers can anticipate moving forward.

The show focuses on Brockmire (Hank Azaria) after he has a disastrous meltdown on-air and attempts to bounce back from the serious career hit that came along with it. Things get a little dicey. "This show is my favorite thing I’ve ever done. Period," Azaria, who also produces the show, told Variety. "I love shooting it, I love editing it, and I love how much people are enjoying it."

Brockmire especially seems to have found its place among baseball fans. "This is hands-down one of my favorite shows I've ever watched," wrote Reddit user DansbaeSwanson. "Great comedy with some quality baseball jokes and references."

The character of Brockmire actually started as a bit that Azaria did with the web show Funny or Die, but he evolved as he became the central character of a full series. One thing in particular that's explored deeper within the full-length show is Brockmire's alcoholism, which the writers will have no choice but to continue exploring in the show's upcoming seasons. The actor told NPR that in the short, Brockmire's alcoholic tendencies were addressed with more humor, but on IFC's Brockmire, they're dealt with more seriously.

"Frankly, the only reason he drank [on Funny or Die] was to allow him to melt down on the air and be so explicit like that, it's just a believable excuse to be that foul-mouthed on the air," Azaria said. "But what the writer saw in it was a portrait of a pretty lonely alcoholic. And then the director really took that ball and ran with it — he didn't let me get away with anything less than honoring the dark night of the soul that Jim Brockmire was experiencing."

He also said in an interview with The A.V. Club that the show definitely evolved even more going into the second season, so viewers should expect that to continue in future seasons. "This year's been a little more challenging because its much more emotionally raw more of the time," he said. "Last year was just kind of this silliness festival, and this year a lot of it is silly and a lot of it is ... 'Wow, that's not so funny. this is getting hard for this man.'"

Azaria has also said that IFC has given the creative team a certain sense of freedom with what they're allowed to do with Brockmire. In an interview with The Hollywood Reporter after Season 1, Azaria was ecstatic to learn that the network was even censoring the second season less than they had the first. "Not only do we have free rein, but we got the delightful news that Season 2 will air with no bleeps! I mean we can't have like, seven F-bombs a show, but we can have two or three," he said, adding that sometimes that kind of censorship can throw off the rhythm of a joke.

So it definitely seems that whatever the plans are for Brockmire moving forward, the plot progression is solid and the network is on the show's side in terms of creative license. With a protagonist as much of a loose cannon as Brockmire has proven to be, and with the real-life baseball guests stars that the show's featured so far in its two season run, there are any number of ways the show could continue to shock its viewers while still keeping that important measure of humanity.