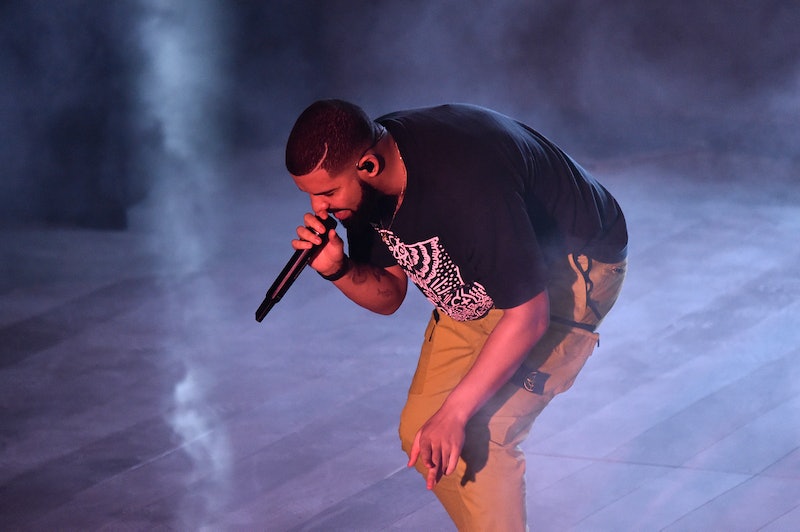 After Drake dropped a few banging singles like "God's Plan" and "Nice For What," his next album has become one of the most highly anticipated music releases of the summer. As if only to raise the anticipation to its highest possible level, Drake just dropped a trailer for his new album, Scorpion. The video only lasts around 38 seconds, but it's packed with moody images that would make you wonder if Drake is upset — if he hadn't already released the single from the album called "I'm Upset." The trailer also confirmed that Drake's Scorpion will come out on Friday, June 29.

At the beginning of the video, which Drake posted on Instagram Monday night, the word "Scorpion" flashes on the screen. Then, "On June 29th" appears next, which is the date that people had guessed Scorpion would be released on based on Drake's other Instagram clues about the album. Not only has Drake been dropping hints about Scorpion's release date, but he also revealed the album's title way back in April when the rapper posted a picture of himself wearing a bomber jacket with the word "Scorpion" embellished on the back.

The new album trailer revealed that Drake is leaning further into his reputation as rap's most brooding artist. At the beginning of the video, you see a security guard pacing in front of a lakeside mansion. Inside that mansion, a brooding Drake sits in front of a window. Outside the trees blow wildly, and Drake suddenly gets up from his seat and then into his car. He drives through the night to a building with red neon-lit hallways, and then you see him in a red-lit recording booth. The whole moody and dark sequence is probably exactly what most people imagine when they think of Drake's writing process, and it's kind of satisfying to have that assumption confirmed.

As if the blustering winds and eerie neon red lighting didn't make Drake's album trailer ominous enough, the background sounds definitely do the trick. The music playing in the video is the song "The Mark (Interlude)" by Moderat. Some fans might recognize this as the soundtrack to some of the creepiest moments during the movie Annihilation. That movie is about a mysterious and uncharted area from which explorers never get out alive. Could that be some kind of metaphor for Drake's psyche? Maybe that's reading too much into the video. But it sure is more fun to theorize about than the fact that Drake might just sample Moderat's song on Scorpion. Either way, the song definitely helps sustain the unnerving vibe of the video.

Echoing the eery, mysterious vibe of the new Scorpion trailer, Drake has become a somewhat elusive figure recently. After Pusha T released the diss track "The Story of Adidon," which claimed that Drake has a son who he keeps secret from the public, Drake's quintessential brooding became even more intriguing. And while the rapper has yet to respond to Pusha T's track, fans are eagerly awaiting a for Drake to divulge some more personal details in his new music.

It's also worth noting that the title of Drake's upcoming album, Scorpion, sounds a lot like "Scorpio," which happens to be Drake's astrological sun sign. Considering that Scorpio has the reputation as the "darkest sign" of the zodiac, it's probably hard for astrology enthusiasts not to look at Drake's new album as a total Scorpio creation in every way. Whether or not Drake addresses all of the rumors about his alleged son on Scorpion, one thing is for sure: this album is on track to be Drake's moodiest release yet.