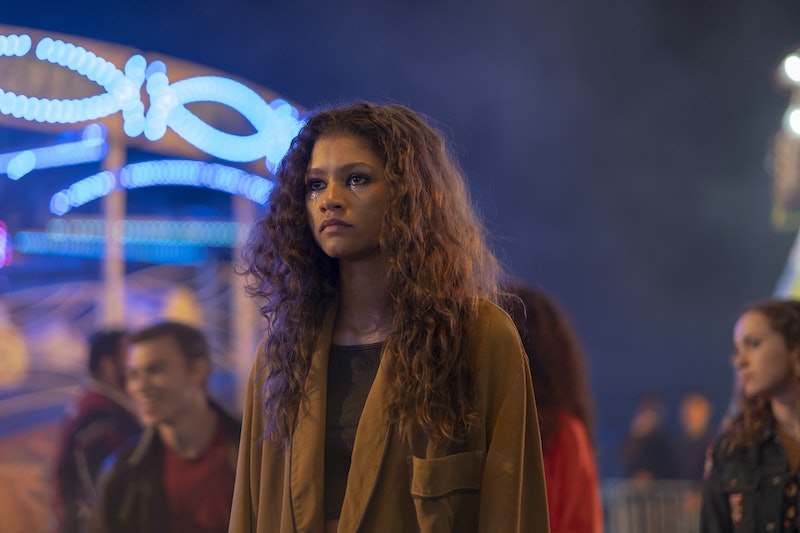 With the Season 1 finale airing on Sunday, fans will want to know when Euphoria Season 2 premieres. The show is a potent blend of euphoric highs and excruciating lows, which makes it best in small doses — but also leaves you craving more. Fortunately, the return of Rue, Jules, and the rest of their troubled schoolmates is a matter of "when," not "if."

Although the series sparked controversy when it premiered due to its depiction of teen sex, drug use, and the "close to 30 penises" shown onscreen, the first season pulled in "solid" ratings and garnered largely positive reviews. As a result, HBO announced that Euphoria was renewed for Season 2 in early July, halfway through its freshman run.

"Euphoria creator Sam Levinson has built an incredible world with an extraordinary cast led by the supremely talented Zendaya," the network's EVP said in a statement. "We are so grateful that he chose HBO as the home for this groundbreaking series. We look forward to following these complex characters as their journeys continue through the challenging world they inhabit."

That said, there's no reason to expect Euphoria to take much longer than a year to return. Sure, the show contains some flashy visuals and Levinson's stylized tone is meticulous, but that can't possibly take as long to put together as CGI-heavy dragon battles. If Season 2 premieres around the same time as Season 1, then it should be back about 10 months from now, in June 2020.

Unfortunately, it's not just the temporary end of a season that fans need to worry about. Even though Euphoria is only one season into its run, the more permanent end of the series is already looming large on the horizon. "Well, [the characters] are in high school, so there are only so many seasons it can go," HBO president Casey Bloys told TVLine recently. "There's a time limit." As to what exactly that time limit is, Bloys said, "We'll follow [Sam's] lead on that. There is no set plan. But I don't think you want 30-year-olds playing [high school students]."

While the exact grade the characters are in is unclear, Rue is 17 years old, which means she's either a junior or a senior. The show doesn't seem to be following a strict "one season = one school year" timeline like, say, Glee, so Levinson could likely stretch out the rest of Rue's high school career over several seasons. But still, unless he moves past Rue and Jules entirely and introduces a whole new class of characters (à la Degrassi), then Euphoria likely has a relatively short shelf life. (It's already outlived the Israeli series on which it was based, which only ran for one 10-episode season.)

Given that Season 1 seems to be heading towards a dramatic conclusion to the Rue/Jules/Nate arc, even a typical 10-month wait for Season 2 will probably end up feeling like an eternity. There's just no substitute for true euphoria.