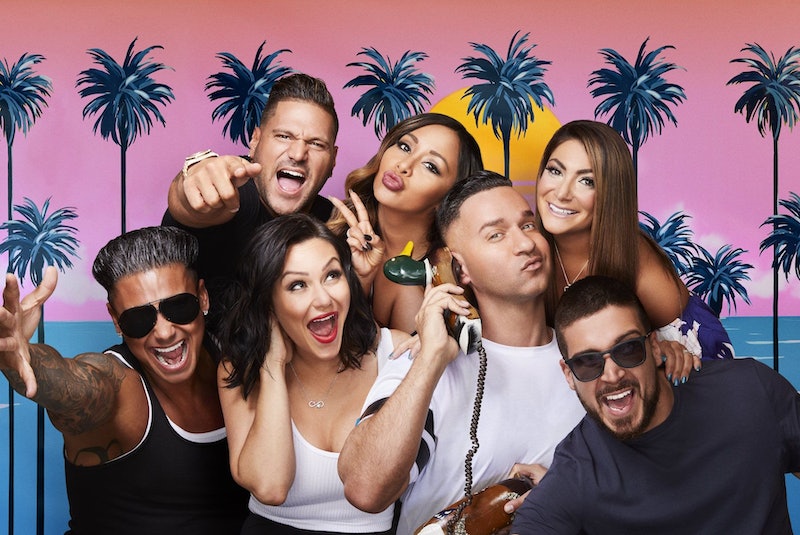 Jersey Shore fans: don't put those pumping fists to rest just yet. Even though the Shore fam is wrapping up Miami-based Season 1 of their reunion show (the finale airs on June 28), the filming of Jersey Shore: Family Vacation Season 2 has already begun. So, get ready for — in the words of DJ Khaled — anotha one.

EARLIER: Season 1 has been an emotional rollercoaster, that's for sure. From family separation anxiety, to legal mishaps, to marriage proposals, to pre-fatherhood relationship drama, the beach house was never short of opportunity for entertaining footage.

And if you think the Miami heat was enough to stir up chaos among the shore veterans — Nicole “Snooki” Polizzi, Jenni “JWoww” Farley, Mike “The Situation” Sorrentino, DJ Pauly D, Vinny Guadagnino, Ronnie Ortiz-Magro and Deena Nicole Cortese — think again, because, according to Us Weekly, Season 2 is following the crew to Las Vegas. While Season 1 saw an absence of the beloved Sammi Sweetheart, shortly after the Vegas announcement, Cortese revealed that she wasn't able to squeeze the trip into her schedule, which is why she wasn't part of filming there. Fans speculated that she was a no-show because she could be pregnant, so she took to Instagram to put those rumors to rest.

"I just want to make it clear that it's not [because] I'm pregnant that I'm not in Las Vegas," the 31-year-old wrote in a now-deleted post, per Life & Style Mag. "I am NOT [sic] pregnant. I am not in Vegas [because] I have some personal stuff going on at home that I need to attend to which prevented my schedule and production schedule to match up accordingly." So now the group is down two Guidettes.

Regardless of their missing links, what happens with these party animals in Season 2 isn't guaranteed to stay in Sin City. Since Us Weekly announced their Vegas trip on June 7, Asbury Park Press reported that filming in Vegas wrapped as of June 15, which seems like a premature ending. That stop may have to do with an incident that took place between Ortiz-Magro and his on-again, off-again girlfriend while the crew was in town, per Us Weekly.

“Ronnie and Jen have been fighting over their daughter," a source told the outlet. "Ronnie has been filming the show in Vegas the last couple of days and Jen wouldn’t tell him where their daughter is. She showed up to the hotel where they were filming.” Las Vegas police confirmed to Us Weekly that a physical altercation between the had occurred couple, tough they were unable to locate Harley when they arrived on the scene. Since these altercation, filming in Vegas has stopped and, according to Radar Online, the crew has relocated back to Jersey.

Per People, Harley was arrested on June 24 for domestic battery. She allegedly dragged Ortiz-Magro with her car, their infant daughter inside. Court records show that her bail has been set at $3,000. Neither Harley nor Ortiz-Magro responded to the outlet's requests for comment.

Whether or not filming will continue in New Jersey is also unclear. By the looks of Polizzi's Instagram, since arriving back home, she's living her everyday life with her two kiddos, Giovanna and Lorenzo. However, on June 19, she posted a mirror selfie that featured a cameraman in the background, which was accompanied by the camcorder emoji. She was obviously hinting at the filming of something, but Family Vacation isn't her only recording endeavor. She and Farley star in a web series called Moms With Attitude. So fans can't be sure exactly why she appeared in front of the cameras that day.

Just this week, she was on an outing with a family bridal party rather than hanging with the shore gang.

Meanwhile, Ortiz-Magro and the boys were busy hanging at the MTV Movie Awards.

So, when is Family Vacation Season 2? If it continues to follow the same timeline as Season 1, fans should expect a season premiere in April of 2019. And fans will surely find out exactly what went down out in Vegas.

More like this
Everything To Know About 'RHONY' Season 14
By Jake Viswanath and Alyssa Lapid
Yes, That Is Victoria & Another ‘BiP’ Alum In Zach’s ‘Bachelor’ Trailer
By Kadin Burnett and Grace Wehniainen
What Jen Shah's Delayed Sentencing Could Mean For The 'RHOSLC' Season 3 Reunion
By Brad Witter and Jake Viswanath
Julia Haart’s Husband Fired Her As CEO Of Elite World Group
By Brad Witter
Get Even More From Bustle — Sign Up For The Newsletter