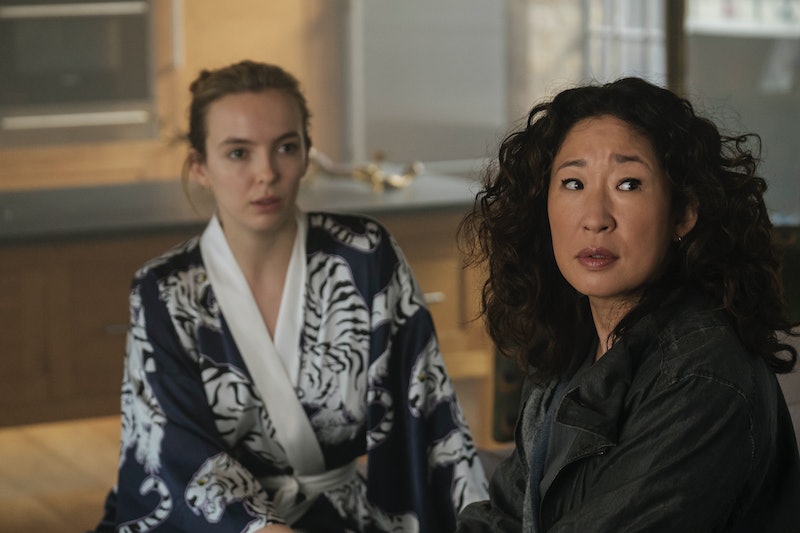 How did the end come so soon? It feels like Season 2 of BBC America's most addictive series just started, but after its sure-to-be-bloody Sunday finale, fans will be clamoring to know when Killing Eve Season 3 premieres. The electric chemistry between stars Sandra Oh and Jodie Comer is unlike anything else out there, and we'll need them back on our screens ASAP, please.

Update: Killing Eve has been renewed for Season 4 ahead of its Season 3 premiere, according to a BBC press release. Season 3 is set to premiere this spring.

Earlier: Fortunately, the question of a third season is a matter of when, not if. Fans don't have to worry about going into the May 26 finale fretting about whether or not Killing Eve will get canceled in the off-season, leaving them with an unresolved cliffhanger. Now that Orphan Black has ended, this spy thriller is by far BBC America's most successful show, commercially and critically, and as TV Line reported, Killing Eve was renewed for Season 3 on April 8 — less than 24 hours after its Season 2 premiere.

That swift renewal shows tremendous faith on the part of the network, and why wouldn't they have faith in the award-winning show? As AMC Networks president Sarah Barnett said, according to TV Line:

"[Creator] Phoebe Waller-Bridge and [Season 2 showrunner] Emerald Fennell have delivered two addictively entertaining seasons. As we did last year, we're renewing Killing Eve right out of the gate, now with Suzanne Heathcote as lead writer, as a sign of confidence — we adore this show as much as our fans do. Killing Eve doesn't do anything in a templated way; we love giving opportunity to three genius women to make their mark."

In an industry that's still heavily male-dominated, it's awesome to see Waller-Bridge use this successful series as a training ground of sorts for other female showrunners. She first passed the baton off to up-and-coming actress/writer Emerald Fennell (Call The Midwife) before passing the reins to Suzanne Heathcote (Fear The Walking Dead) for Season 3, allowing these women to get a season's worth of experience under their belts before heading off to create more content of their own.

Unfortunately, the network's renewal announcement didn't come with a specific Season 3 premiere date attached… but it's pretty easy to guess when fans can expect this game of cat-and-mouse (or cat-and-cat, more accurately) to continue. Season 1 of Killing Eve debuted on Sunday, April 8 of 2018, while Season 2 bowed on Sunday, April 7 of 2019. Barring any unforeseen delays, it's pretty reasonable to assume that Season 3 will start airing the first or second Sunday of April in 2020.

If that seems like a long way away, then fans can at least look forward to seeing Killing Eve most likely dominate at the Primetime Emmy Awards this September, the nominees for which will be announced on July 16. The show's breakout first season didn't manage to land a Best Drama nod, since that category was crowded with the likes of the The Americans, The Crown, The Handmaid's Tale, Stranger Things, This Is Us, Westworld, and winner Game Of Thrones.

But fortunately for Killing Eve, The Americans has ended — and The Crown, The Handmaid's Tale, Stranger Things, and Westworld have all moved out of this ceremony's eligibility window in order to make room for the juggernaut that will be Game Of Thrones' final season. (This Is Us is the only Best Drama nominee besides Thrones to be returning in contention this year.) Killing Eve is likely to repeat its nominations for Oh and writing, while also potentially picking up even more nods for Series, Directing, and hopefully Oh's indispensable co-star Jodie Comer.

Gold Derby currently has odds on Oh to win the award for Best Actress in a Drama Series on her second nomination — which would make her the first actress of Asian descent to ever win that category in the 71-year history of the Emmys. If fans have to wait over 10 months for more Killing Eve in their lives, at least they have that potentially historic win to look forward to this fall.

This article was originally published on May 26, 2019