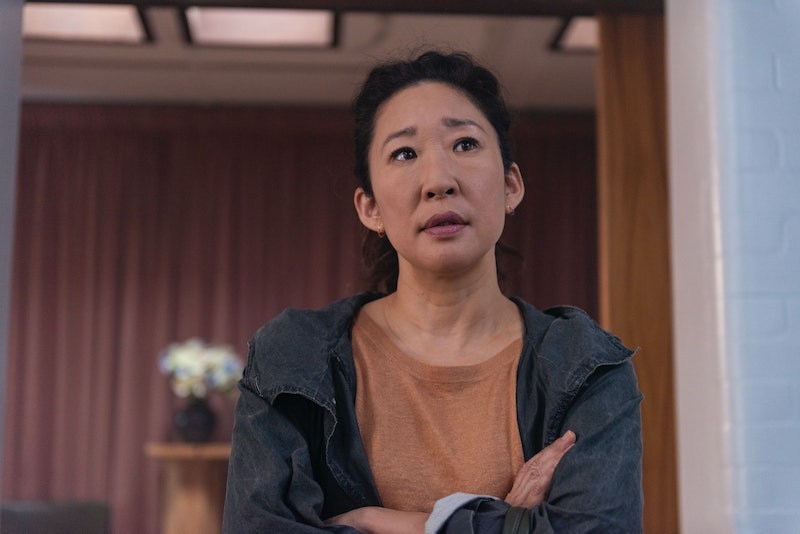 Killing Eve's second season has only just premiered, but AMC is already looking to the show's future. Killing Eve was renewed for Season 3, and there will be a new showrunner for the next set of episodes.

The renewal announcement came at the AMC Networks summit on Monday, April 8, Variety reported. BBC America also announced that Suzanne Heathcote will be the showrunner for the new season.

"We love having this show and the brilliant Sandra Oh, Jodie Comer, and Fiona Shaw on our networks," AMC president of entertainment networks, Sarah Barnett, said at Monday's event, according to Variety. "As we did last year, we're renewing Killing Eve right out of the gate, now with Suzanne Heathcote as lead writer, as a sign of confidence — we adore this show as much as our fans do."

Barnett's statements indicate that the network isn't worried about ratings dropping or potentially negative critical reviews of the current second season. Instead, executives are so sure about Killing Eve's continued success that they're renewing the show before fans even see most of Season 2.

The news about Heathcote taking over from Emerald Fennell isn't a surprise, either. Back in February, Killing Eve creator Phoebe Waller-Bridge told reporters that she wanted to "continue this tradition of handing it on to a different woman every single time," per Decider, while responding to a question about whether she'd return to helming the show.

In a recent interview with Marie Claire, Oh talked about playing Eve and the importance of representation on screen, something she also addressed at the Golden Globes, which she co-hosted. Oh told the magazine that when she found out she'd been cast as Eve, she was shocked. She explained:

"I was like, 'What’s my part?' When my agent said, 'You're f*cking Eve,' I just couldn't see it. I couldn't see myself in a leading role....It's like a f*cking shard in my heart. We work really hard because we love what we do, but we understand how important it is to be visible and to see ourselves, right? To catch myself in a moment where I'm still not doing that was really difficult."

And when InStyle asked Oh if she's had different roles offered to her after starring in Killing Eve, the actor said that the Hollywood "landscape has changed," and for the better. "I do feel like the landscape has changed and people are a bit more interested in telling much more culturally diverse stories," Oh told InStyle in March. "I am interested in that. In what capacity, I'm not sure, but it absolutely has to do with Asian-Americans and finding the storytelling within that community. There seems to be an opening, so I want to take the energy there."

In addition to increasing on-screen representation, Killing Eve is just a genuinely great show. So the renewal isn't a huge surprise. Still, it's a great reminder that increasing representation on screen isn't just good for humanity, it's good for business.