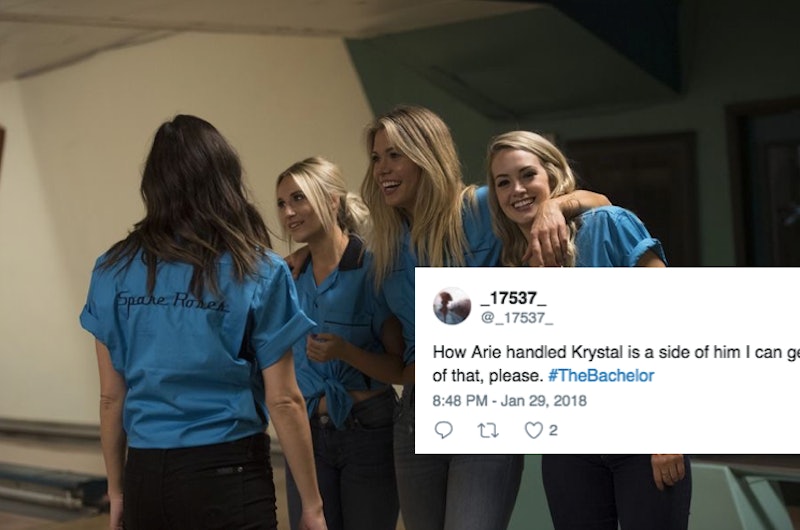 Never in my memory of The Bachelor has a contestant been so reviled from the get-go and yet refused to back down. Krystal sure looked like any other contestant on Arie’s season of The Bachelor, but she’s quickly transformed herself into the villain of the show, steamrolling over any woman between her and Arie and gaining herself a lot of enemies in the mansion. But I guess that enough was finally enough, because Arie wasn’t taking her you-know-what anymore. When does Krystal go home on The Bachelor? Arie may be growing weary of her games given the confrontation between Arie and Krystal on The Bachelor Monday night. (Although a preview does show she lasts until at least the Feb. 5 episode, and I can almost guarantee that she'll be the prime two-on-one date suspect.)

Krystal has been pulling that delusional “Arie loves me and only me” card that so many others try, and it’s really not working. Well, it doesn’t work for any of the women who try it, but especially not Krystal. Why? Because all of Krystal’s machinations are completely transparent. This is a grown woman throwing a fit because doesn’t get to spend alone time with a man that is concurrently dating 20 other women. It’s always amazing to me that this happens on The Bachelor, that the contestants are shocked and saddened when they find out that the Bachelor is dating other women. It is a dating show. That is the premise. If you wanted to find love solo, try Patti Stanger or Blind Date.

The group bowling date with Arie stipulated that the winning team would spend the second half of the date with Arie. Well, Arie is a big old softie, because he invited the losing team along, too, and Krystal. Blew. A. Gasket. Despite Krystal’s insistence that she was “not going to sit there and fight for [Arie’s] attention,” she opted to throw a tantrum, pack her toys up, and go home. “Something that I look for in a partner, I want someone to include me in decisions,” Krystal told the rest of the women. “All my stuff is packed in my bedroom, and I’m not going on the date.” I don’t know how Arie is a "liar" and "untrustworthy" (Krystal's words) because he let everyone hang out together — it seems like he was just being nice?

Krystal staying home was clearly a ploy to get Arie to come upstairs and tend to her, and it was successful… to a point. Firstly, Arie didn’t even notice when Krystal was missing. But after the other women pointed it out, Arie went upstairs and told Krystal, “Whatever was said up here could have been said to me directly.” He wasn’t having Krystal’s mind games, and he told her so. “You’re the only one up here,” he said. “Are you teaching me a lesson?” When Krystal flimflammed, Arie had had enough. “I think you should stay up here tonight. I’m going to go down and hang with them,” Arie said. “Know that I’m not happy about it. I’ll see you in a few days.”

Um, hello, strong Arie! I am not sold on this man as the Bachelor (I can’t let people in and I’m working on it), but I loved that he wasn’t going to be a part of the mind games. Twitter loved it, too.

Krystal may not last long on The Bachelor if this is the way that she's choosing to behave. It's good for ratings, sure, but it's not good for anyone else in the Bachelor mansion, and it's not good for Arie, either. Everyone is going to hate Krystal unless she stops being the adult version of Angelica Pickles from Rugrats. Not everything can go your way in life, and not everything can go your way when you've opted to be on a reality show with 30 other people fighting over the same man. Krystal needs to check herself before her time on The Bachelor suddenly ends — and it may all too soon if she keeps it up.