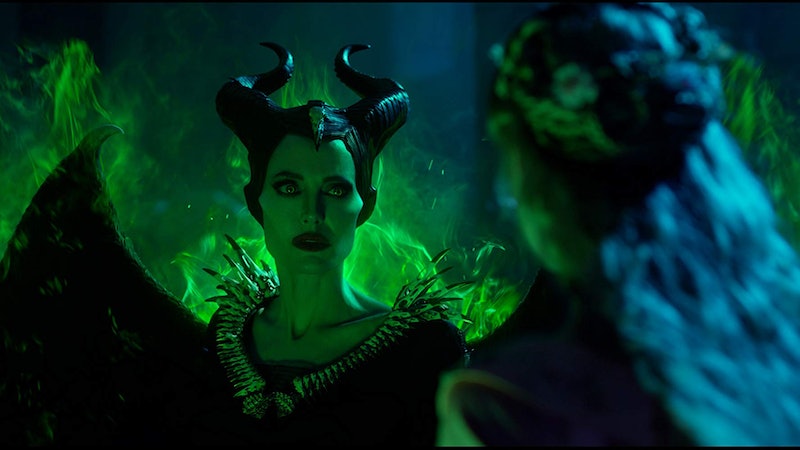 At the end of 2014's Maleficent, the powerful fairy (Angelina Jolie) lifts the dark curse on the Moors and crowns 16-year-old Aurora (Elle Fanning) queen of the kingdom. Maleficent entrusts Aurora with the duty to rule and restore harmony between the humans and magical creatures, but with her still present as the young royal's guardian. In Maleficent: Mistress of Evil, out Oct. 18, peace in the Moors is disrupted when Aurora goes against Maleficent's wishes and accepts Prince Phillip's (Harris Dickinson) marriage proposal. And while the Queen of the Moors claims she's old enough to make her own decisions, that all depends on how much time has passed between Maleficent and the sequel.

"Five years ago, I thought I lost you forever," Philip says to Aurora in the trailer. "There is no curse that can ever tear me away from you. Will you marry me?" Taking that as proof of the timeline makes sense, given that it has actually been five years of real time since the first film was released. Five years also gives ample time for the young couple to have gotten to know each other better, contrasting their relationship against the childhood betrothal between the two characters as they are in Disney's animated 1959 Sleeping Beauty.

Back in the live-action world, Aurora would be 21 years old in the sequel, a definite turning point into adulthood — at least in our reality. She is then old enough to make her own decisions as both an individual and as an independent queen. Maleficent's refusal to give her blessing to Phillip and Aurora's union then seems unjustified and antagonistic. But the horned fairy definitely has her reasons.

Aside from what is likely a case of separation anxiety, Maleficent also feels uneasy about her soon-to-be in-laws. If Aurora marries into Phillip's family, this unites their kingdoms and puts the Moors into the hands of Phillip's parents, King John (Robert Lindsay) and Queen Ingrith (Michelle Pfeiffer) of Ulstead. This isn't exactly a good idea, since it seems the Queen of Ulstead lacks respect for mystical beings. In the trailer, she passive-aggressively expresses her condescension towards magical creatures when she tells Maleficent, "You have done an admirable job going against your nature to raise this child. But now, she will finally get the love of a real mother. Tonight, I consider Aurora my own."

"In this [film], Aurora is older and is facing the challenges of the world and it’s been emphasized to [her and Maleficent] how different they are," Jolie said at a D23 Expo panel, per IGN. "And they’re encouraged to not be a family and pulled apart by their differences, and we fight for the belief that what is different makes you stronger and what is family and what defines family is what you believe in and how you love and what you stand for. It’s not just blood and it’s not just because you’re the same, so I love this story very much and the themes of it."

Queen Ingrith is the force trying to keep Maleficent and Aurora apart in this story, using Phillip and Aurora's love towards her own agenda. Beyond just supposedly protecting her son's fiancée and the people of Ulstead, she also has a personal grudge against magical creatures. According to Disney twenty-three, per Digital Spy, Queen Ingrith wants to avenge the death of her brother, who she thinks was killed by one of Maleficent's constituents. So she isn't just playing on the defense but also seeking the destruction of everything mystical, inhuman, and unknown.

Hopefully, over the past five years, Aurora hasn't just grown older but also wiser. Ultimately, it seems like it's up to her to stop the violence, talk sense to both parties, make the Ulsteads see that there is good in being different, and restore peace between her kingdom and her husband-to-be's kingdom.