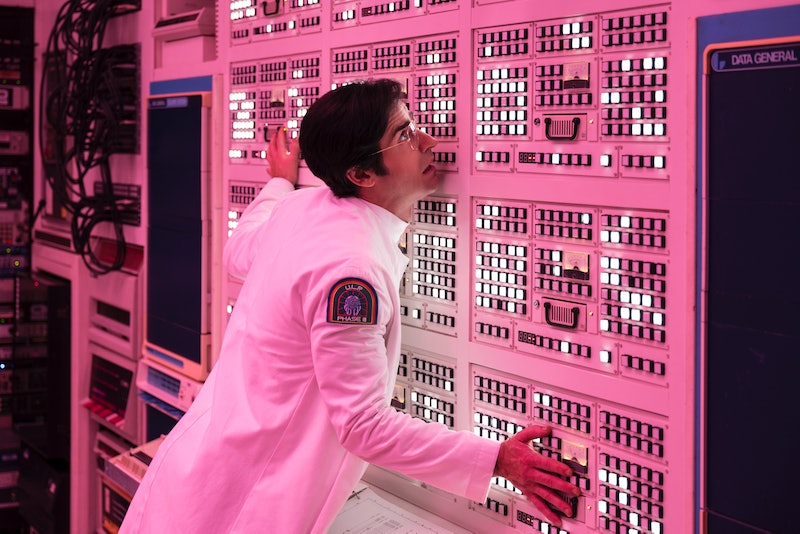 Netflix's new miniseries, Maniac, has a futuristic feel but doesn't seem to outright state what year (or reality) it's happening in. So as you settle in to watch, one of the first things on your mind will likely be when Maniac takes place. Despite its high-tech premise, though, the show might feel more familiar than some of its other sci-fi peers.

According to the official Netflix description for Maniac, the series is "set in a world somewhat like our world, in a time quite similar to our time." So, it's basically the opposite of Star Wars, which is famously set "a long time ago in a galaxy far, far away." And as the season progresses, the show begins to feel more and more real.

Maniac is about a group of strangers who enter a drug trial that promises to "fix" a host of "problems" ranging from mental illness to heartbreak. As far as we know, such a drug doesn't exist in today's world, but almost everything else resembles the world we know: The characters dress like us, the city resembles New York. It all looks strikingly familiar, and yet slightly futuristic, as if it's occurring in an alternative 2018 or just a few years down the line.

Plus, without giving too much away, the trial sees main characters Annie Landsberg and Owen Milgrim (played by Superbad co-stars Emma Stone and Jonah Hill, respectively) rotate through a variety of genres and time periods. That includes a Lord of the Rings-esque fantasy sequence, a film noir sequence, and other different eras of storytelling. It's all a bit disorienting, but outside of the trial, it's still basically 2018.

Showrunner Cary Fukanaga also contextualized the Maniac timeline during an interview with Digital Spy. "I had just spent like a year-and-a-half, almost two years, working on The Alienist, " he explained. "So the birth of psychology, also, was something that I had just been inundated with. So jumping 100 years into the future to see where we're at was something that also fascinated me." As The Alienist takes place in the 1890s, that sets the series roughly in the present day.

TL;DR, don't let the lab coats and blue lighting fool you. Think more Black Mirror, less 2001: A Space Odyssey: Maniac is presenting an alternate present, rather than a 30-year leap forward. This kind of mind-bending experiment could definitely exist in 2018. Just don't expect there to be lots of hyper-specific references to current events or politics — which should make it a whole lot easier to focus on the story, anyway.

Like, for example, remember in 2015, when everyone rewatched Back To The Future Part II in order to figure out what the movie got right and wrong? Sometimes it's better to take a nod from Lost and flash sideways, not ahead. Otherwise, viewers might be too distracted trying to discern fact from fiction and Googling when (or if) those magic pills will ever actually hit the market. Trust me, Maniac is fully immersive enough on its own.