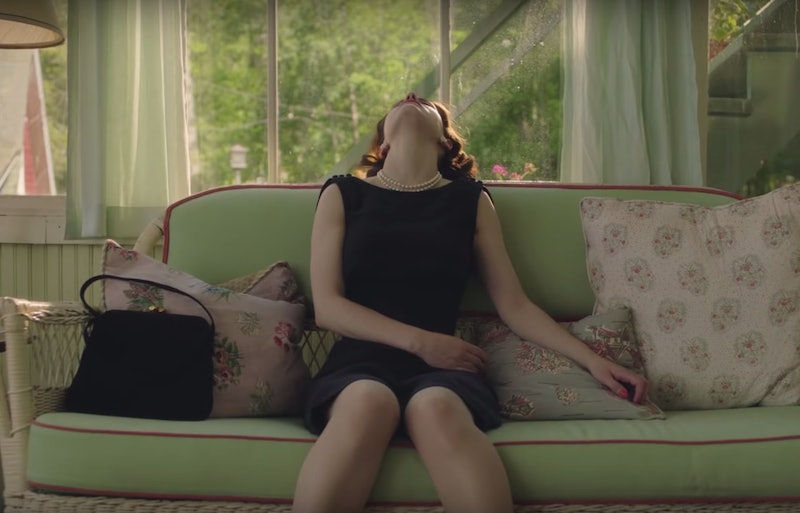 It's smooth sailing ahead for The Marvelous Mrs. Maisel, even if the titular Midge is still finding her way. Though the Amazon comedy's second season only debuts Dec. 5, we already know The Marvelous Mrs. Maisel Season 3 is happening. According to Deadline, it was renewed for more episodes all the way back in May, so get ready for another year of jewel tones and stream-of-consciousness stand-up.

This isn't a surprise, really, as Deadline reported the show was renewed for a second season when only the pilot had premiered. The outlet also noted that Midge's journey would ultimately lead her to a coveted spot on Johnny Carson's couch. So, unless that happens in Season 2, that should let fans know creator Amy Sherman-Palladino is playing the long game when it comes to this show.

Plus, it doesn't hurt that Maisel has accrued nothing but rave reviews and fancy accolades since that initial two season order. In 2018, the show took home two Golden Globes, including Best Television Series (Musical or Comedy), as well as eight Primetime Emmy Awards including Outstanding Comedy Series. If that wasn't enough, Maisel won a Peabody Award, the Producer's Guild Award, and Rachel Broshnahan took home a Television Critics Award as well as one of those Emmys and one of those Golden Globes. With that in mind, there's no reason why Amazon wouldn't throw their full support behind Sherman-Palladino and The Marvelous Mrs. Maisel.

"You’re going to give it to us because we’re bringing home the fancy thing right," Sherman-Palladino joked about a pick-up, addressing the studio after her Peabody win, according to Variety.

Amazon will drop all 10 episodes of Maisel Season 2 on Dec. 5. It includes some comedic adventures in the Catskills, as well as an episode titled "Look, She Made A Hat" — bravely referencing a Stephen Sondheim musical (Sunday In The Park With George) that didn't exist until about three decades after Maisel takes place. There's also some potential new love interests ahead, namely a gentleman called Benjamin played by Zachary Levi, as well as a lot of Upper West Side family drama. Here's the official description of the new season:

After Midge’s triumph at the Gaslight, the fallout from her takedown of Sophie Lennon looms large, making her climb up the comedy ladder more challenging than ever. As the actual grind of being a comic begins to take its toll on Midge, the pressure to come clean to her family weighs on her — especially as her choices have a ripple effect on everyone around her.

When that's all said and done, when will Season 3 premiere? Both Season 1 and Season 2 debuted smack dab in the middle of the holiday season. Fitting, as this show is perfect for curling up on the couch after a big meal and escaping into someone else's family problems. Look for The Marvelous Mrs. Maisel Season 3 in late November or early December 2019. How many trophies will the series take home between now and then? Only time will tell!

More like this
'Succession' Season 4 Will Be An "Absolute Banger" According To Cousin Greg
By Bustle Staff
'Ted Lasso' Season 3 Might Be Its Last
By Zosha Millman and Grace Wehniainen
Everything To Know About A Potential 'Lockwood & Co.' Season 2
By Gretchen Smail
'Tulsa King' Season 2 Could Kick Off A Larger Universe Like 'Yellowstone'
By Grace Wehniainen
Get Even More From Bustle — Sign Up For The Newsletter
From hair trends to relationship advice, our daily newsletter has everything you need to sound like a person who’s on TikTok, even if you aren’t.