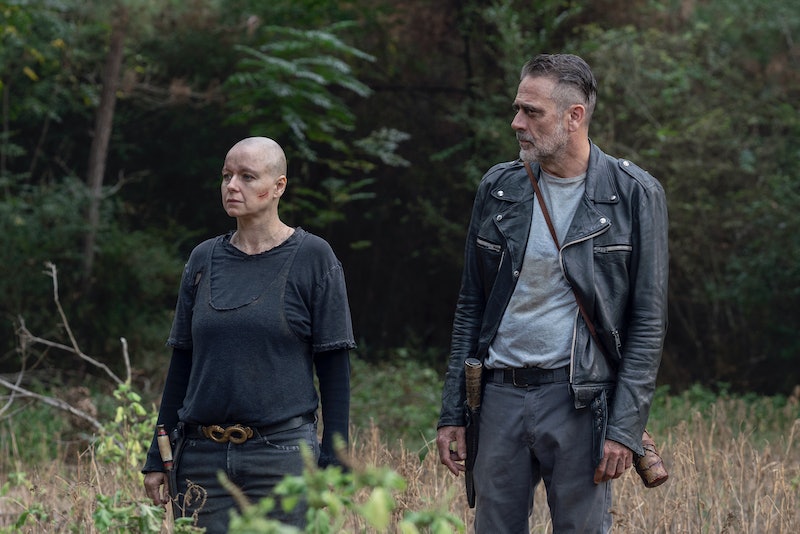 Warning: Walking Dead comic book spoilers ahead! Romance isn't exactly common on a show like The Walking Dead, but if there's one love story no one saw coming it's whatever the heck is blossoming between Negan and Alpha. Not only have the two of them had sex, but they've also become each other's confidants. It's a confusing relationship, to say the least, particularly because Negan kills Alpha in The Walking Dead comics, revealing himself to be a double agent who had been faking his allegiance to the Whisperers the entire time. However, it remains unclear if the show plans on honoring the source material or will decide to take Negan's storyline in a completely different direction.

With a handful of episodes left in the season, there's still a solid chance that Negan will end up betraying Alpha like his comic book counterpart. He is, after all, a character that would play his hand very close to the vest — or rather, leather jacket, in his case — making it difficult to predict where his true allegiance lies. The only problem is that Alpha's death should've already happened at this point in time. In the comics, Negan beheads Alpha long before the Whisperers and their horde head to Hilltop for a big battle. Now, the battle is already underway and Alpha seems more unstoppable than ever. So what the heck is Negan waiting for already?

Basically, this all boils down to one of three options. On the one hand, it's possible the series has just altered the timeline of events leading to Alpha's demise, meaning Negan will still kill Alpha, but just not yet. Then there's the possibility that Alpha will die, but not by Negan's hand. That would mean that his alliance with the Whisperers is legit and any hope of his redemption has been tossed out the window. And finally, there's the chance that Alpha won't die at all, which would make the show go completely off script.

The Walking Dead has never been afraid to embark on new terrain. Characters like Gamma and Daryl don't even exist in the comic books, and others who remain alive in the books are now dead on the show. (RIP Carl.) That makes predictions somewhat tricky. However, it's hard to believe the writers would have kept Negan around for so long not to use him for such a crucial plot point. He's done so much to Alexandria and Hilltop in the past, so this would be the perfect way he could try and make amends.

More like this
Netflix Shut Down 'Bridgerton' S3 Rumours About A “Very Dark” Storyline
By Bustle
'The Last Of Us' Has Officially Been Renewed For Season 2
By Darshita Goyal
This 'Gossip Girl' Wardrobe Error Has Gone Viral On TikTok
By Alyssa Lapid
Helena Bonham Carter Doesn't Think 'The Crown' “Should Carry On"
By Sam Ramsden
Get Even More From Bustle — Sign Up For The Newsletter
From hair trends to relationship advice, our daily newsletter has everything you need to sound like a person who’s on TikTok, even if you aren’t.