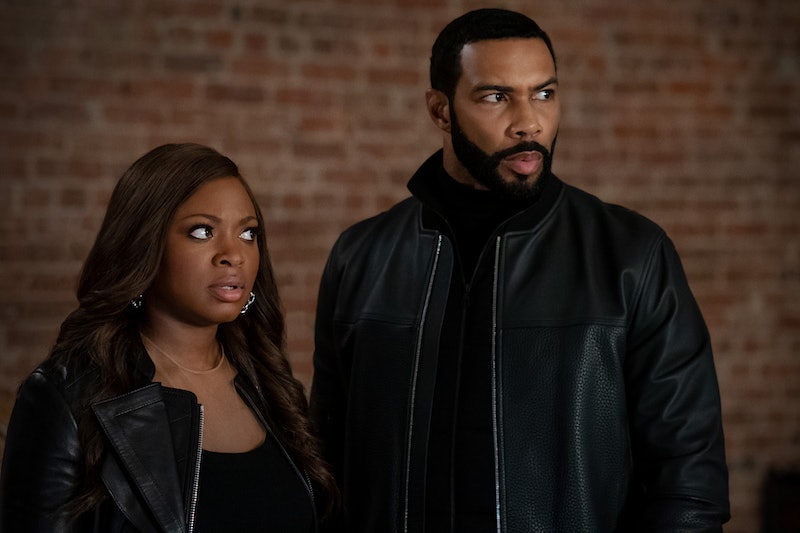 Spoilers ahead for Power Season 6. Fans knew it was going to be a wild ride, but no one could have predicted that Ghost's fate in Power would be decided so soon in the final season. With only five episodes left to go, fans will have to wait until Jan. 5, 2020 for Power to return for the rest of Season 6, as the title card in the midseason finale credits teased. It's not going to be easy to make it through the holidays without knowing who shot Ghost in Sunday's episode, "No One Can Stop Me."

But there's a lot of story left to wrap up still and luckily, Starz gave the series plenty of time to do it. Until this final one, most seasons have been just ten episodes long, so the extra five are a gift for fans who want to see this thing through until the bitter end.

And for real, it is going to be bitter. As soon as Ghost started talking to the actual ghosts of Raina and Kanan in Episode 10, it was pretty clear that someone was going to take a shot at him — and soon. He's been alienating people left and right for years, but showrunner Courtney Kemp and her writing team made it very clear in that final scene that pretty much everyone has a solid motive to kill him now.

Will it be Tariq? Paz? Dre? Sad and depressed Saxe? Tasha, Tommy, and Tate were all seemingly huffing and puffing their way into the Meatpacking District to track Ghost down at Truth, and it would be hard to blame any of them for taking a final shot at Jamie St. Patrick.

It could be a fakeout, of course, and Ghost somehow survives the gun shot wound and makes amends in the show's final hours. But that's not really how Power works (RIP Angela, LaKeisha, and everyone else). After all, Kemp isn't afraid to kill off her main characters or make choices that fans might might disagree with. She even told Deadline in August 2019 that the final season was going to be tough for fans to swallow.

"It was hard to get through, emotionally. And I already know that certain people will hate the way the show ends, because we are taking a big swing creatively and pushing the boundaries of what this show can do. It’s time for the show to end. But it was harder to walk through emotionally than I suspected. I am ready for the show to be over, because the story is over. But saying goodbye to the actual humans we work with — that’s a different story altogether — no pun intended," Kemp said.

So get ready for a drama filled final five episodes. Until then, let's all just hope that at least 2-Bit and Spankey make it out of this season alive.