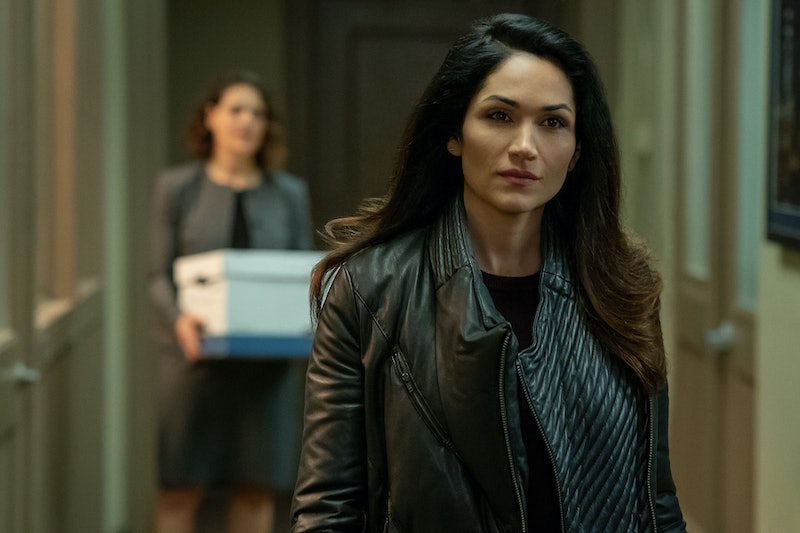 Spoilers ahead for Power Season 6. Almost every season of Power has included the death of major and seemingly essential characters. Which means that heading into the "Final Betrayal," as Starz is calling the final season, all bets are off. Still, it's a shock for fans to learn in the Power Season 6 premiere that Angela Valdes died from Tommy's shot at Ghost. And not just because Tommy (Joseph Sikora) snapped and tried to kill his BFF or that any hopes of the series ending with Angela (Lela Loren) and Ghost (Omari Hardwick) living happily ever after together are completely dashed. It's a gut punch mostly because this character death is precisely what showrunner and creator Courtney Kemp promised fans wasn't going to happen.

Turns out that it was all about semantics. If you flash back to September of last year, you'll remember that most fans assumed Angela was gone for good in the Season 5 finale cliffhanger. It sure looked like Angela was dying in Ghost's arms in the stairwell of that Queens high school when the episode faded to black and Power Twitter was was lit on fire with the hottest Angela and Jamie takes.

Kemp quickly took to Instagram to settle up with fans, posting a pic that read "Angela Is Not Dead" and then captioning the picture with the line "Stop the debates." Rightfully, most viewers dropped it, figuring it meant that Angela would somehow survive the gunshot wound. Kemp smiles sneakily when asked why she lied to her fans. "I didn't lie," she tells Bustle. "She wasn't dead," Kemp adds with a shake of her head.

Technically, she's right. Angela was breathing all the way up until the first scene of Season 6, when she's being rushed into surgery. She doesn't die until hours later, when her death is triple confirmed by Saxe (Shane Johnson) when he unzips her body bag in the morgue (which was totally unnecessary, by the way), lest you were thinking the show could rely on the unofficial rule of TV deaths: if there's no body on screen, a character can always come back. Alas, this doesn't seem to be the case with Power's final season.

But it did make for an epic cliffhanger, which is why Kemp adds that her team also shot an official death scene meant for Season 5 but decided not to use it. Now that Angela is actually gone, things are going to really go off the rails, something Kemp seems to be looking forward to fans seeing. Before this season's end, expect bodies to drop left and right. "The dominos fall," Kemp teases, adding that Season 6 is "definitely one of the bloodiest seasons yet."

"We've had some pretty bloody seasons, but the people that die this year are going to be more emotional for our audience, some favorites. It's dark, but [the season] is also funnier than ever. It's both things. We knew we were driving to the end."

It's bittersweet to see Angela go, even though most fans have been wishing and hoping for this moment since the series' inception. It does set the season up for greatness, though. Sikora says of losing Angela, "As Joseph I was disappointed that I wouldn't see my friend as much. As Tommy, I wasn't so much rejoicing as much as I thought it evened the playing field with Ghost and that we could start to grow back together. Obviously that's not necessarily what Ghost feels. But Tommy's reality is a skewed reality, Tommy doesn't adhere to the morals or the ethics of most human beings."

Loren says that she knew for a couple seasons that her character wouldn't make it till the end, which made filming bittersweet. She tells Bustle that her favorite season to film was Season 5, given that she got to work with actors she never shared scenes with before. Remember that for almost five seasons, Angela was usually seen at work, having sex with Ghost, or being chided by her sister Paz (Elizabeth Rodriguez), but in Season 5 she got to interact with Naturi Naughton's Tasha, Sikora's Tommy, and even Tariq (Michael Rainey, Jr). "It was strange bedfellows and mix and match," she says.

But you never forget your firsts. Loren adds that many of her favorite scenes are from Season 1. "I am from Northern California, so moving to New York City [to film Power] was like a whole different level. Like getting to do all of those scenes on the library steps or underneath the whale in the Museum of Natural History [in Season 1, Episode 2]." From those early scenes to the bitter end, Angela Valdes has been the contentious heart of the series. Without her, who knows how this "final betrayal" is going to play out.