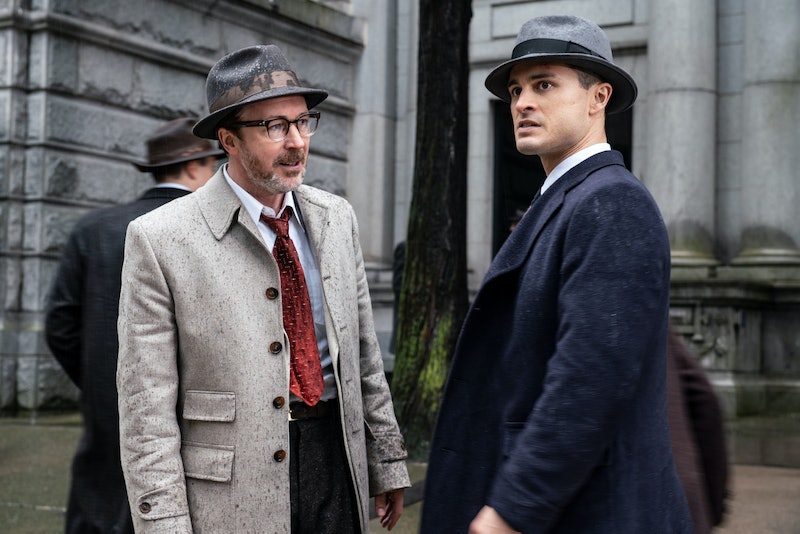 The alien invasion isn't ending yet for History's Project Blue Book, which will return for Season 2. The first season ends Tuesday, March 12 — but fans don't have to worry about its fate since, according to The Hollywood Reporter, History already renewed it for 10 more episodes. The show was off to a strong start, with THR reporting that it was "the most-watched new cable series" as of February.

The network spoke highly of the show, too. As History's head of programming, Eli Lehrer, told THR in a statement:

"We are believers in Project Blue Book, and so is our audience, who has sparked a conversation about the hundreds of unsolved cases and our nation's military response to UFOs that have remained relatively secret until now ... our extraordinary creative team have shaped a compelling narrative that is the perfect blend of historical authenticity and entertainment that inspires curiosity in our viewers to learn more. We've touched on a very relevant topic and look forward to a second season."

That's right, it's the History channel, so there's some truth to the show. It's based on a real government operation called Project Blue Book, which ran from the '40s to '60s and explored potential UFO sightings to determine the country's safety. (Project Blue Book has since been de-classified and you can read through the documents on the National Archives site.)

But while it's based on real events, Project Blue Book is a dramatization. Tuesday's finale takes viewers to Washington D.C., where Dr. Allen Hynek and Captain Michael Quinn may start questioning their beliefs about extraterrestrial life.

"When your mission statement is to deny what's true, there's a dynamic tension between you and objective reality. You want to play this out for several seasons, the notion is: Do they believe, do they not believe?" co-showrunner Harley Peyton told SYFY, adding:

"They're seeing these things on a weekly basis, it has to impact who they are and what they believe in. If you buy into that, and want to communicate that, you have to plan out narrative and character development that takes them to that next step, which is what happened in the second half of the season and what we'll [likely] be focusing in on in Season 2."

Actor Aidan Gillen, who plays Dr. Hynek, told Syfy that he hadn't seen any scripts for Season 2 yet, but there are plenty of cases left for the show to dig into. According to the National Archives, over 12,000 supposed UFO sightings were documented by Project Blue Book, and 701 could never properly be explained. That's a lot of potential material for Season 2 and beyond.

Plus, the History channel could be positioning the series to be its next big hit. Project Blue Book is currently second in ratings to Vikings, but since Vikings is ending soon, History is likely looking for something to fill its shoes. As far as an air date for PBB Season 2, nothing's been determined yet. Season 1 premiered in January, so fans could see a January 2020 air date, nut it could also be moved into the fall rotation like Vikings has the last couple of seasons and air in November 2019. In any case, 10 more episodes and even more UFO sightings are coming soon.