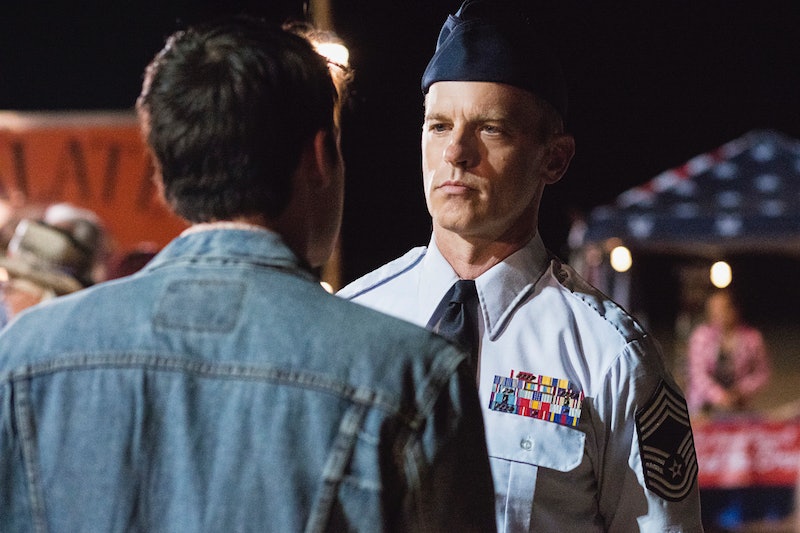 The CW's Roswell reboot is already filled with intrigue. The pilot introduced three aliens that survived the 1947 Roswell, New Mexico crash and also Project Shepherd, a secret government operation dedicated to protecting earth from these invaders. And while Project Shepherd isn't real outside of Roswell, the show, there has been a notable government project dedicated to researching aliens.

In the show, Project Shepherd is Sergeant Manes' pet project. The headquarters are located in a bunker that you have to open with a handprint and it contains a lot of fancy technology and pictures of alien autopsies. Manes brings the sheriff's son, Kyle, to the HQ when Kyle starts becoming suspicious about a glowing handprint he saw on Liz's chest. It was left there when Max, an alien, saved her life. Manes gets right to the point with Kyle, describing the 1947 Roswell UFO crash that killed most of the aliens on board. But with the handprint evidence, Manes ominously tells Kyle that it must mean at least one of them escaped.

"They're a violent race," Manes says of aliens. "They despise compassion, they despise freedom, love, and they thrive on our tragedy. They are at their very core killers."

That's not necessarily the impression viewers have gotten of the three aliens Roswell is unwittingly harboring, but it doesn't seem that the townspeople have much good will for people that are different in any kind of way. Max and his siblings have every reason to be fearful, because Project Shepherd is basically doing exactly what they're afraid of — slicing open aliens to get answers.

This Project Shepherd seems less like an official government operation and more like something government employees have secretly started on their own time. Manes is super serious about how it's helping protect not just Roswell, but the world, and he tells Kyle that Kyle's father was part of the project as well. It's basically Kyle's destiny to find the aliens and destroy them.

The actual U.S. government has certainly been interested in potential extraterrestrial activity, but not quite on the same level that Project Shepherd is. The real-life government operation about this topic was called Project Blue Book and it operated from 1952 to 1969, according to LiveScience. During that time, the Air Force recorded and looked into over 12,000 supposed UFO sightings to determine if the Unites States was in any danger. Those files have since been declassified and reside in the National Archives.

However, there is a big gap in the alien lore of Project Blue Book, because it doesn't include Roswell, y'all. The National Archives site states, "The National Archives has been unable to locate any documentation among the Project BLUE BOOK records which discuss the 1947 incident in Roswell, New Mexico." Suspicious, or what? Perhaps that's why Project Shepherd is needed in the TV series — to fill in a gap.

However, government officials do want you to know that while there are no records of Roswell in the Blue Book files, they don't think anything fishy went down there. The National Archives site states that there is no evidence of a government cover-up and that the materials found in the area were from a balloon device from a then-classified operation.

But if that answer's not good enough for you, the TV show is more than happy to speculate about what would happen if aliens really did crash in New Mexico — and what the fictional Project Shepherd is going to do to stop them.