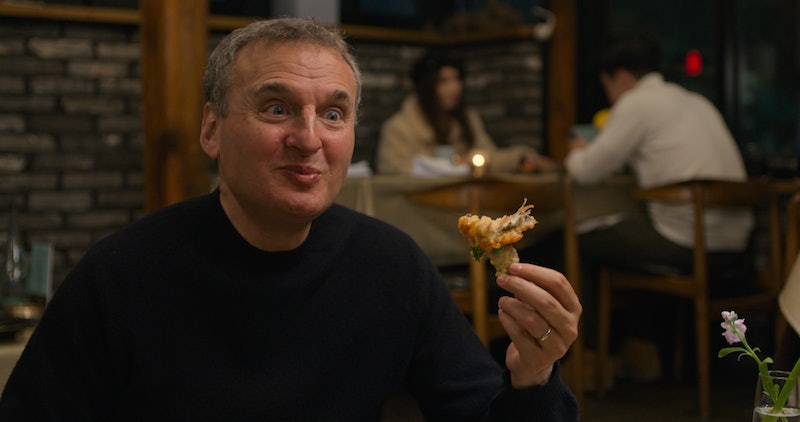 Phil Rosenthal's culinary adventures take him to Marrakesh, Chicago, London, Seoul, and Montreal in the third installment of his Netflix docuseries, Somebody Feed Phil. And there are more travels (and food) ahead: Somebody Feed Phil will return for Season 4, and it may be sooner rather than later. Netflix ordered 10 more episodes of the show in May 2019, and though a premiere date has yet to be announced, a rep for the streaming giant confirmed to Bustle that the remaining five episodes have already been filmed.

The first two seasons of Somebody Feed Phil premiered roughly six months apart, in January and July 2018. If Netflix follows the same schedule, fans can expect to see Season 4 sometime around November. However, the company didn't announce the Season 3 premiere date until April, just over a month before its release. So an official Season 4 premiere date may not come until as late as October.

Rosenthal, who earned his 13th career Emmy nomination in 2019 for Somebody Feed Phil, previewed what's to come in future seasons while speaking to Deadline in August. He said that there will be more domestic locations because he understands "not everyone can afford to travel overseas" and he hopes to inspire all kinds of travel.

"Again, just getting off the couch is a win. Just going to the next town, going down the street to the Peruvian restaurant that you were afraid to go to, because you don’t know anything about Peruvian food," he explained. "You can travel in your own town even, so it's my job, I feel, to turn you on to great stuff."

In serving up his explorations of new cultures and cuisines with a side of humor, Rosenthal has kept viewers tuned in for more than a dozen episodes and will undoubtedly deliver more of the same whenever Season 4 becomes available to stream in the future.