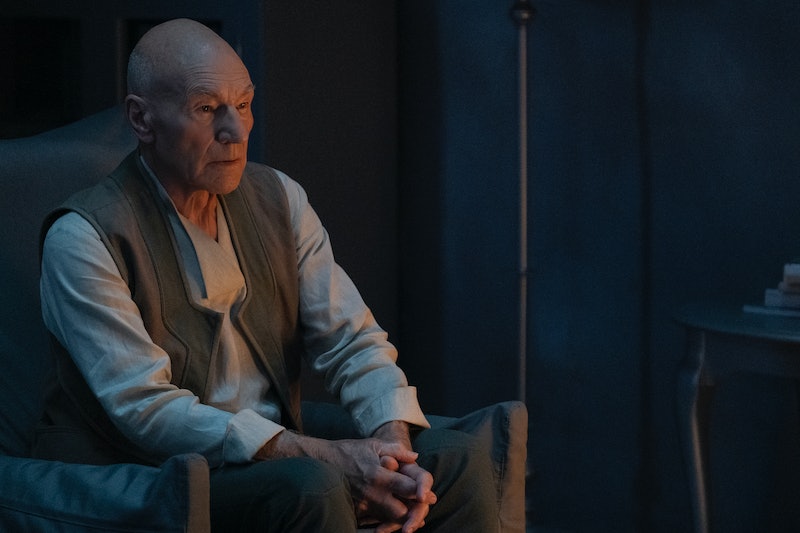 Spoilers ahead for the Season 1 finale of Star Trek: Picard. Star Trek: Picard just wrapped up its first season, and the finale was an emotional wallop for anyone invested in Admiral Jean-Luc Picard (Patrick Stewart) and Data (Brent Spiner)'s relationship. Season 1 saw Picard discover the truth about Starfleet's ban on synthetic lifeforms, rescue Soji (Isa Briones), a young woman who didn't know she was an android, and stop a secret Romulan cabal from destroying all synthetic life in the universe. But there are still a ton of questions left to be answered when Star Trek: Picard returns for Season 2.

The series was renewed for a second season in January — before Season 1 even premiered. So the writers have had a lot of time to think about where to take the story from here. Deadline reported at the time that Season 2 was slated to premiere in late 2020 or early 2021 with another 10 episodes. But with much of Hollywood production currently shut down due to the COVID-19 pandemic, it might be a bit longer before we see Picard and the La Sirena crew again.

When the show does return, here's what it needs to address.

Will Season 2 Stick With Synthetic Life Or Follow Another Story?

In some ways, the plot around the mysterious attack on Mars, the banning of synthetic life, and the Romulan prophecy about androids destroying the universe was wrapped up. Picard saved Soji and the other synths, and The Federation lifted the ban on synthetic lifeforms and took their secret home planet into their union. But the Romulans remain a threat and the synths will still need to integrate back into society. So the events of Season 1 will most likely bleed into Season 2. For example...

What Was Coming Through The Beacon Portal?

The message that Sutra saw in Dr. Jurati's vision told of advanced synthetic beings that would come to the aid of other synths whose livelihoods were being threatened by organics. When Soji started up the beacon that would contact these beings, a portal opened and enormous robotic arms began to uncurl from within. Soji closed up the beacon and the portal, but these beings definitely saw what was up and heard the SOS. Who are these advanced androids? Where do they come from? It seems unlikely that they're just going to hang up the phone and leave it at that.

Is Data Gone For Good?

One of the best things about Picard was the cameos from all of the beloved characters of The Next Generation, including Jonathan Frakes as Will Riker, Marina Sirtis as Deanna Troi, and Jonathan Del Arco as Hugh. Data, played by Brent Spiner, appeared in dream-like sequences from the very beginning, and the finale revealed that, though Data died in the 2002 movie Star Trek: Nemesis, the consciousness that he downloaded into his "brother" B4 was kind of...alive?

Data's memories, thoughts, and feelings had been existing in a kind of simulation, and his neurons were being used to create the many sons and daughters Picard discovers on their isolated planet. But in the finale, Data's consciousness asks Picard to end the simulation — essentially letting Data die. Picard sitting by Data's bedside as his image rapidly ages and fades away all to a soundtrack of "Blue Skies" was a goodbye moment fans didn't get in Nemesis. If you didn't cry, you're probably an android.

But these are just a few of the questions that Season 2 of Picard will hopefully dive into. There are tons more about the Romulans, synthetic lifeforms, and Picard's new not-Starfleet ship and crew for the show to explore. Fingers crossed that the wait won't be too long.

More like this
Everything To Know About 'RHONY' Season 14
By Jake Viswanath, Alyssa Lapid and Brad Witter
Wait, Is 'Happy Valley' Not Actually Over?
By Darshita Goyal
Netflix Shut Down 'Bridgerton' S3 Rumours About A “Very Dark” Storyline
By Bustle
6 'Happy Valley' Easter Eggs You May Have Missed
By Sophie McEvoy
Get Even More From Bustle — Sign Up For The Newsletter
From hair trends to relationship advice, our daily newsletter has everything you need to sound like a person who’s on TikTok, even if you aren’t.