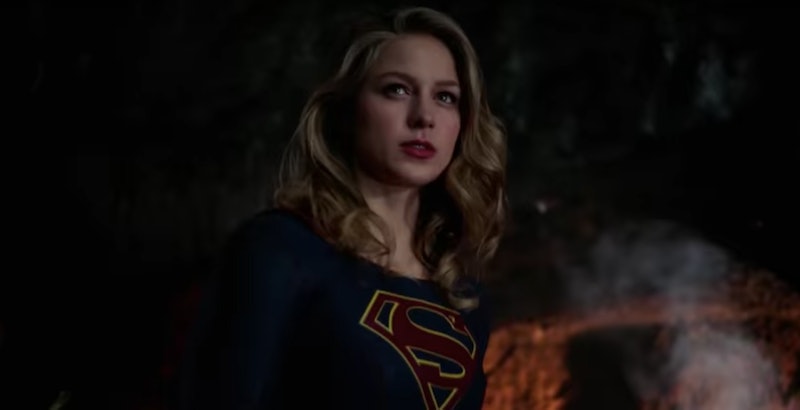 If there's one thing the phenomenal success of Black Panther and Wonder Woman shows, it's that fans are hungry to see actors on screen who redefine what a superhero has traditionally looked like— read: white, straight, cisgendered, and male. Another addition to the superhero genre that's still breaking the mold? CW's Supergirl, which is set to air its Season 3 finale on Monday, June 18. But fans don't need to feel too sad about another season of the show ending, because Supergirl will return for Season 4, and hopefully soon.

UPDATE: Per The Wrap, Supergirl Season 4 will premiere on Oct. 14.

EARLIER: Supergirl's renewal was announced by CW in April of 2018, along with a host of other shows, including Arrow, Jane The Virgin, Crazy Ex-Girlfriend, Legends of Tomorrow, The Flash, Riverdale, and Supernatural, among others, according to Variety. “As The CW expands to a six-night, Sunday through Friday schedule next season, we are proud to have such a deep bench of great returning series for 2018-19,” Variety reports that CW president Mark Pedowitz said in the announcement. “By picking these 10 series up for next season, we have a terrific selection of programming to choose from when we set our fall schedule in May, with more still to come. And I’m especially happy that we’ll continue to work with the incredibly talented casts, producers, and writers who create the series our fans are so passionate about.”

Though the premiere date of Supergirl's fourth season has yet to be revealed, according to Deadline, the network did announce during its upfronts presentation that Supergirl would be back in the fall. It will also be moving to The CW's new Sunday block of programming, paired with the upcoming Charmed reboot. Filming likely won't start until after the star and Supergirl herself Melissa Benoist returns from her stint on Broadway playing Carole King in the hit musical Beautiful on Broadway, where she will star until Aug. 4, per Playbill. But that should still give the writers, showrunners, and actors plenty of time to prepare for an exciting and innovative fourth season.

And some big changes for the show are already underway. Digital Spy reported that Supergirl is adding a transgender character to the cast for Season 4. A casting call for the show announces that they are looking for a "Transgender woman, early 20s, open ethnicity," who will play a character named Nia Nal. The description of her character indicates that she'll be an interesting addition to the Catco team:

"A confident, wunderkind of a fashionista. Once a political speechwriter, Nia is the newest addition to the Catco investigative reporting team. With her she brings sparkling wit and biting humor but under that banter-y, chic facade, lays a soulful young woman who has much to offer the world. A young 'Cat Grant' type."

Fans of the show are already celebrating its efforts to further diversify its cast and include greater representation and visibility for trans actors:

This casting call comes as part of a movement by many in Hollywood to advocate for increased gender, racial, and sexual diversity both onscreen and behind the camera. By no means have these goals been achieved. But when popular network shows such as Supergirl take proactive steps to diversify their casts and increase visibility for trans actors, it's at least a move in the right direction.

But it should also go without saying that diversifying a cast isn't something to strive for just because it's the right thing to do—it also makes shows more interesting, exciting, funny, thoughtful, and relatable to a much wider audience. And what show wouldn't want that? So while fans don't yet know what lies in store for Supergirl in Season 4, there's little doubt that the newest season will be bigger, better, and more inclusive than ever.