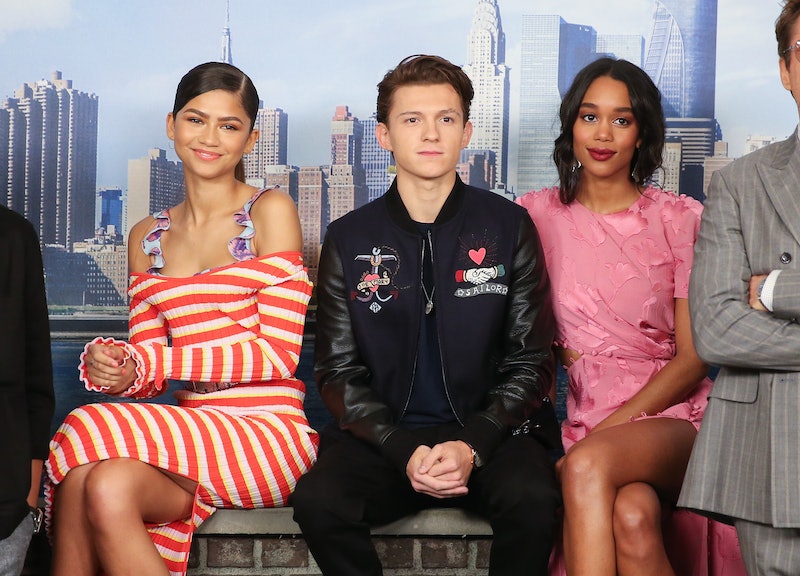 Summer blockbusters sure look different than they used to, especially when it comes to diversity. Spider-Man: Homecoming is the most recent hit getting praise for its diverse supporting cast, and rightfully so. Meanwhile, fellow summer flick Valerian and the City of a Thousand Planets is also attempting to break the racial monotony of Hollywood films, with a set of diverse extras and supporting characters. These movies are proof that Hollywood is taking much-needed steps towards inclusivity — but only when it comes to supporting characters, not leads.

With almost all its teenage characters played by actors of color, Homecoming is the most diverse film in the Marvel Cinematic Universe thus far. The movie even features the MCU's first interracial relationship at its center, with Peter's love interest being Liz (Laura Harrier), who is biracial. That said, the three characters with the most screen time, and thus the most well-rounded characters — Vulture (Michael Keaton), Tony Stark (Robert Downey Jr.) and Peter (Tom Holland) — are all white men. Similarly, while Valerian might be chock-full of non-white extras and supporting players like Rihanna, it doesn't negate the fact that the title character is still a white man (played by Dane DeHaan), as is the second lead (and love interest) Laureline (Cara Delevingne).

The diversity in Homecoming, at least, has been heavily praised since the film's casting was announced, with the movie being considered a shining example of how a big budget blockbuster can forgo an all-white cast and still make box office gold. It's commendable that director Jon Watts ensured that his film would have actors of color to realistically reflect the world, and I wish that more directors followed his approach.

However, while it is true that any onscreen diversity feels like a victory in Hollywood, the trend of adding diverse supporting characters, while maintaining white leads, is dangerous. It makes it feel "realistic" and "normal" to have people of color supporting white heroes, without them being allowed their own lead roles. By perpetuating the image of people of color as supporting characters, without any significant depth or conflict, the trend enforces the belief that their own stories are not worth telling. The message sent by this kind of on-screen diversity quickly transforms from one of inclusivity to one of exclusivity: performers of color can be anything, as long as they're not the main character or superhero.

And Valerian and Homecoming are, unfortunately, just the two most recent movies to follow this trend. Many films released in the past few years have made efforts to diversify by surround white leads with a non-white supporting cast and extras. Disney's hit Beauty and the Beast, for instance, added several black extras to the French village setting, as well as supporting players Audra McDonald and Gugu Mbatha-Raw. (even if both actors appeared mostly as magical objects, not humans.) However, like Homecoming, the Disney remake kept white leads — Emma Watson, Dan Stevens, Luke Evans, and Josh Gad, to name a few. Similarly, Power Rangers also featured a hugely diverse cast, but had a white man be the leader Red Ranger.

Meanwhile, other movies ditched diverse supporting casts and instead went for diverse glorified extras, like the overwhelmingly white Fantastic Beasts and Where To Find Them and evenWonder Woman, which showed off multi-ethnic warriors supporting a white queen (Hippolyta), her white daughter (Diana), and a white general (Antiope). Other films that have fallen into the trend include Doctor Strange, Divergent, The Maze Runner, and Pitch Perfect. Even television shows are not exempt — see 13 Reasons Why and The Handmaid's Tale.

It seems evident from this trend that Hollywood studios are clinging to the out-dated notion that white protagonists are needed to sell a movie to audiences in American and around the world — but this assumption has been debunked time and time again. A recent study from the Creative Artists Agency, via Indiewire, found that films with diverse casts bring in more diverse audiences, which can result in opening weekend box office numbers three times those that don't attract non-white audiences. This study only confirms the findings of last year's UCLA's Hollywood Diversity Report, which concluded that diverse films do better at the international box office. Why Hollywood seems to be stuck in the mentality that films need a white hero to succeed grows more mysterious every day.

Granted, there are a few exceptions. Up and coming films including Jumanji: Welcome to the Jungle, Black Panther, Aquaman, and A Wrinkle in Time all feature lead characters of color, both of the male and female variety. And the call for more dimensional characters of color grows louder every day. Films with non-white leads are becoming slightly more common, but they are still not nearly as common as those with white leads. And they are far from the norm.

So, what's important is that we never stop asking for more. To be content with the diversity in films like Spider-Man: Homecoming and Valerian is to be content with people of color constantly being in the background. We can't mistake this small step forward for a huge victory, or otherwise, that huge victory may never come.