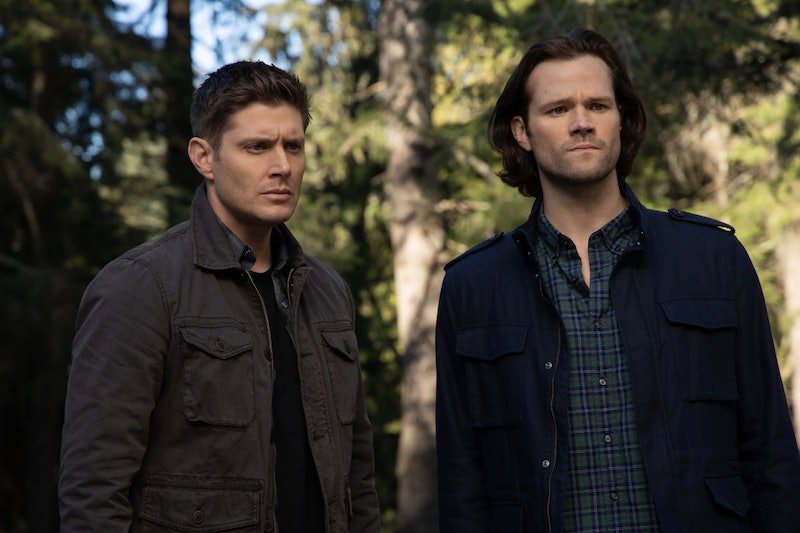 The end of an era is nearly upon us. Supernatural Season 15 will mark the iconic sci-fi/fantasy show's final run, and needless to say, it will be emotional. It's unclear exactly when Supernatural Season 15 will premiere — that information is likely coming sometime in the next few months. But nearly every season up until now has debuted around mid-September to early October, so that's about the timeline you can expect. And everyone should probably use that time in between seasons to prepare themselves, because according to star Jensen Ackles' recent Instagram post, next year they "go BIG!!! REAL BIG!!!"

Supernatural has been a phenomenon since it premiered all the way back in 2005, and it's got some of the fiercest fans around. Ackles and co-star Jared Padalecki have spent the better part of the past two decades traveling from Comic-Con to Comic-Con, battling tons of onscreen devils and monsters, and pranking each other on set. But now it's time for them to move on to whatever's next in their careers, even though they'll always be Sam and Dean in our hearts.

Luckily, there's still quite some time until Supernatural's final goodbye, and in the meantime, there are plenty of similar shows to keep you busy — even if they won't totally ease the pain.

This is the obvious first choice. Buffy, played by Sarah Michelle Gellar, was an O.G. TV vampire slayer, and she essentially paved the way for Dean and Sam to do their thing. All seven seasons of the show are available to stream on Hulu.

Who doesn't want to marathon 171 episodes of Ian Somerhalder content? This is another show that, like Supernatural, focuses on a pair of brothers, though they certainly don't have the chummy relationship Dean and Sam do. Oh, and they're the vampires, not the hunters. Stream all seasons on Netflix.

AHS is still alive and well, so there are more seasons to look forward to even after you watch all the episodes available right now. There's a new theme and completely standalone story every year, so feel free to bounce around between seasons, depending on whether you'd like to be horrified by a haunted house or a twisted mental asylum, just to name a few options. The most recent season even features a fight against the apocalypse and the Antichrist, so Supernatural fans will feel right at home. Seven seasons are available on Hulu.

Once Upon A Time really leans into its campy, whimsical, theatrical storylines in the best way — it is based on a collection of classic fairy tales and beloved Disney characters, after all. OUAT tends to be less dark and violent than Supernatural, but still delivers tons of drama and action, so it's a great palate cleanser if you still want to stay in the fantasy realm. Watch all seven seasons on Netflix.

Another show that focuses on demons, the occult, and plenty of supernatural happenings? Chilling Adventures of Sabrina! This Netflix original series just debuted the second season of its half-witch, half-mortal hero's adventures earlier this month, so now there's a solid 20 hours of spooky content to stream.

Gerard Way of My Chemical Romance fame wrote the comic on which this series is based, and Ellen Page stars as one of the Academy's members. So really, how could you go wrong? The show, which follows a group of siblings with inexplicable powers, was just renewed for a second season, so now's a good time to catch up on all the hype.

Let's end with a classic. Charmed originally ran from 1998 to 2006, and followed three sisters as they discovered and embraced their mysterious, witchy powers. There's a reboot of the series in full swing on the CW, but if you want a throwback, stream the original run of Charmed on Netflix.

This is just a sampling of all the shows to tide you over until Supernatural's next (and final) season. There's a long wait looming, but if Supernatural's history tells us anything, it's that its grand finale won't disappoint.