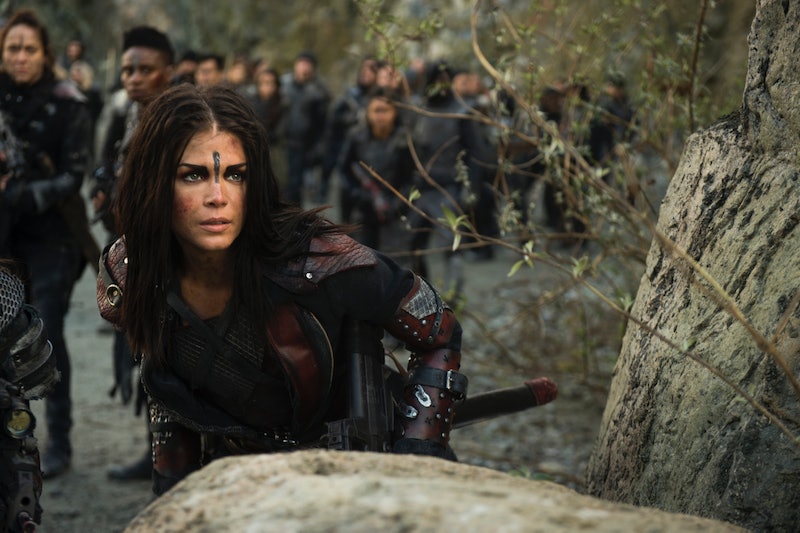 Life is never easy for the characters on The 100. Whether they're trapped down in a bunker for years on end or battling for the last piece of greenery on earth, these people will go (and have gone) to extreme lengths to survive. But now that Season 5 is coming to a close on Aug. 7, will the series prove to be just as resourceful as the characters in it? Thankfully, the beloved CW series isn't going anywhere anytime soon, The 100 will return for Season 6, according to Deadline.

The fight for the valley may be about to reach an epic conclusion (and a bloody one at that), but the story of Clarke, Bellamy, Octavia & Co. is still far from over. Back in May, the network announced that it was renewing The 100 for a sixth season, allowing it to join the ranks of numerous other CW shows that were picked up for another go-round. This includes beloved shows such as Arrow, The Flash, Jane the Virgin, Riverdale, Supegirl, Black Lightning, Crazy Ex-Girlfriend, DC’s Legends of Tomorrow, Dynasty, and Supernatural. So even after The 100 Season 5 finale on Tuesday night, fans can rest easy knowing that the series will have at least one more season under its belt before it says goodbye for good, which will most likely air in the spring of 2019.

However, that may not be the only good news on the horizon for The 100's long-term future. During the network's summer Television Critics Association press tour day, CW President Mark Pedowitz hinted that there are no plans in place for the series to end after next season. "I doubt it," Pedowitz told reporters, as per E! News, when asked if Season 6 would be the show's last. "Jason [Rothenberg]'s doing a remarkable job of revitalizing the show and i hope it can go on for a long time."

Pedowitz also added that when the time does come for The 100 to come to a close, it won't be kept a big secret. "We're pretty good at giving people enough time to wrap up their shows," he explained. "Look at this year: iZombie, Crazy Ex and Jane, we consciously worked with the executive producers so that they could tell the story in the right way they want to do it."

Rothenberg echoed this sentiment during a separate chat with E! News prior to the Season 5 finale. He told the outlet:

"It's been a weird rollercoaster for me in the sense that like I thought I had the ending and this was not it and when we came up with [the ending of Season 5], I was like, I love this even more and for me this could continue. I mean it depends on how the story lands with the audience season six. ... So, I don't want it to go forever but we certainly have multiple more seasons worth of story to tell in this world."

But while the show itself may live on for many more years to come, that doesn't necessarily mean that all of the characters are safe from harm. The 100 has proven on multiple occasions that it isn't afraid to kill off fan favorites and now that Kane is severely injured, his days on the show could be numbered, though actor Henry Ian Cusick assured reporters as the TCAs last Thursday that fans shouldn't write his character off just yet. “I’m going to be on Season 6 of The 100,” he revealed, as reported by TVLine. “There’s just one more episode left to see how badly he was injured.”

Anything is possible on this series, which is probably why it's had such a long and impressive run in the first place.