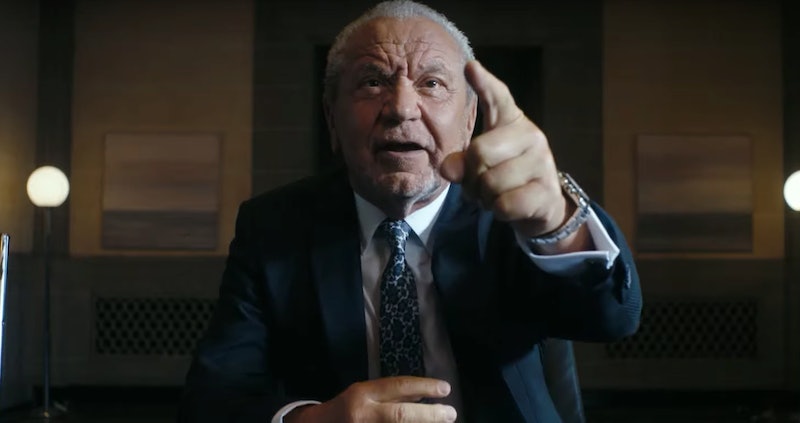 Since 2014, The Apprentice has become one of the big names of the autumn TV line-up. And it seems to be following tradition this year, as BBC One dropped a trailer for the 15th series yesterday. Utilising the disastrous Fyre Festival fiasco to announce its return, the broadcaster then teased that the show will "coming soon". So when does The Apprentice 2019 start, and what will might this series entail for the contestants?

It appears that the series will be returning next month, as Lord Sugar told a user on Twitter. While a rep for the show tells Bustle that there's no official air date as of yet, it seems that it'll be back at some point in October. Radio Times also notes that the list of candidates might be released at some point this month, so there's that to look out for as well.

So if you were hoping to become a candidate on this year's series, it's sad news I'm afraid. As Bustle previously reported, the deadline for applications was earlier this year on Jan. 28. Those who were successful with the applications were then called back for another interview between Feb. 26 and Mar. 4.

It seemed that the final candidates had been chosen by the beginning of May, as the Daily Mail reported that they had been spotted filming the opening credits for this year's series in London's financial district.

Despite a photo of the rumoured candidates, there's little to go on in terms of what this series will include. Will it follow the traditional format, with new challenges each week and two teams pitted against each other? Or is Lord Sugar planning on shaking things up? Only he (and I guess Karren, Claud, and a few people at BBC One) know at this point.

However, there is something we do know. BBC Two announced in August that the series' companion show The Apprentice: You're Fired has found itself a new host. Replacing Rhod Gilbert "due to commitments on his successful live tour," comedian Tom Allen will be taking Gilbert's place after appearing alongside Jo Brand on Bake Off's sister show An Extra Slice.

"I'm excited and humbled to be joining this wonderful, much loved show as host," Allen told BBC Two. "I'm looking forward to analysing, satirising and, dare I say, celebrating the many 'interesting' choices the candidates make during their Apprentice journey whilst gaining vaulable insight into the business world."

It seems that Gilbert is more than happy with his replacement, too. "I'm back on the road after a seven-year break, and with such a busy stand-up touring schedule, it's time to hand over the reins of You're Fired to someone else," he said. "The brilliant Tom Allen is going to smash it. In a good way."

News of The Apprentice's return comes at the same moment that Lord Sugar is embroiled with an incident on Twitter involving Hackney MP Diane Abbott. On Monday (Sep. 9), Abbott accused the businessman of continuously harassing her on the site, which, in turn, started the #IStandWithDiane hashtag. Sugar denied this harassment the day before Abbott's tweet, writing that he is "entitled not to like her."