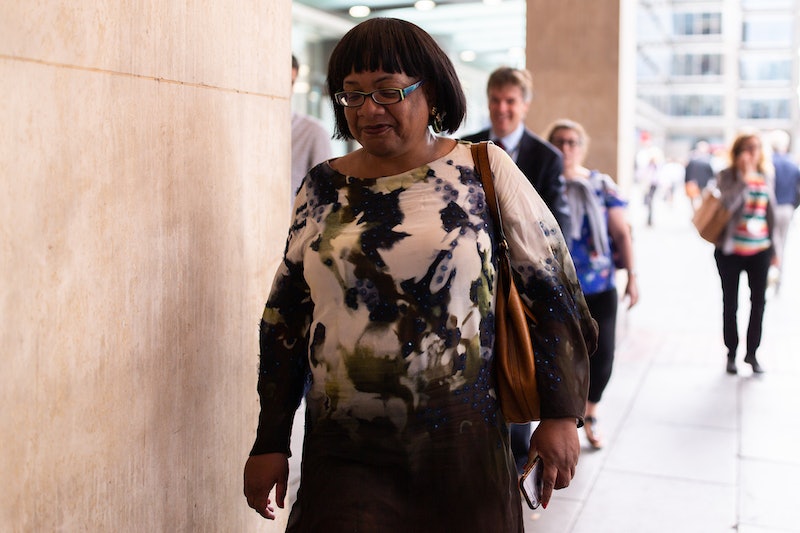 There aren’t many politicians who resonate with me, who I can really believe in, and who care about people who look like me and come from the same socioeconomic background as me. Diane Abbott was the first black woman to become an MP and is the longest-serving black MP in the House of Commons in a sea of Eton schoolboys. She has never had an easy ride. As the use of social media grows, so does the abuse, trolling, and unfair harassment of her online. It’s easy to see why the #IStandWithDiane hashtag began. And there are no two ways about it, I think Diane Abbott's unfair treatment in the public eye is because she's a black woman.

While the UK is on a sinking Brexit ship of disaster and old boys recline on parliament benches and play chicken with our future, on Tuesday Alan Sugar, businessman and star of the reality show The Apprentice, once again took to Twitter to criticise Diane Abbott, the shadow home secretary. His continuous criticism of Abbott is boring, unnecessary, and steeped in misogynoir. She addressed this latest tweet from Sugar calling it “targeted harassment”, and I think she’s right.

Abbott wrote: "This man repeatedly posts 'disrespectful & offensive' msgs & photos of me. This is 'targeted harassment.' He has a history of 'abusive' tweets about me i.e. sexist poetry. I reported him to @twitter hoping they take all complaints seriously, no matter who the twitter user is.”

The Hackney MP has clearly had enough, and so have I, and so have the thousands of other people who showed their support for the MP on Tuesday and made #IStandWithDiane trend on Twitter.

This isn’t some unknown egg profile picture account or bot attacking her, this is a well-known person in the public eye, and Twitter should be coming down on him, just as much as any other user. Like someone's embarrassing granddad, Alan Sugar posts a barrage of 2009-style memes about Diane Abbott and her private life, and it’s so tiresome. When you have 5.3 million followers and you “@” the account of someone who is already unfairly and relentlessly abused online, you know exactly what you're doing. Twitter needs to take these actions more seriously.

On top of that, Alan Sugar has a history of racially insensitive tweets. During the men's football World Cup, he posted an image of the Senegalese football team, with sunglasses edited into the photo in front of the players saying, “I recognise some of these guys from the beach in Marbella. Multitasking, resourceful chaps.” Whether he sees it or not, it’s hard to believe him when he claims, “there is nothing racist” in his tweets about Abbott.

According to a study of the abuse faced by women in politics held by Amnesty International, Abbott “receives an incredibly disproportionate amount of abuse and was the target of almost a third (31.61%) of all abusive tweets we analysed.” This “intersectional discrimination” means she receives more abuse than the top five most-abused women MPs combined. I can’t help but remember when she had a cheeky Mojito tin on the train and she received an influx of unfair scrutiny, especially considering the fact that there are MPs who have done much worse.

That’s why #IStandWithDiane is so important, and it’s wonderful to see so many people come together in support of the MP. Nobody should have to go through what she does on a daily basis; the unfair and disproportionate amount of abuse must stop. It's time to stop feigning ignorance and call out her abuse for what it is.