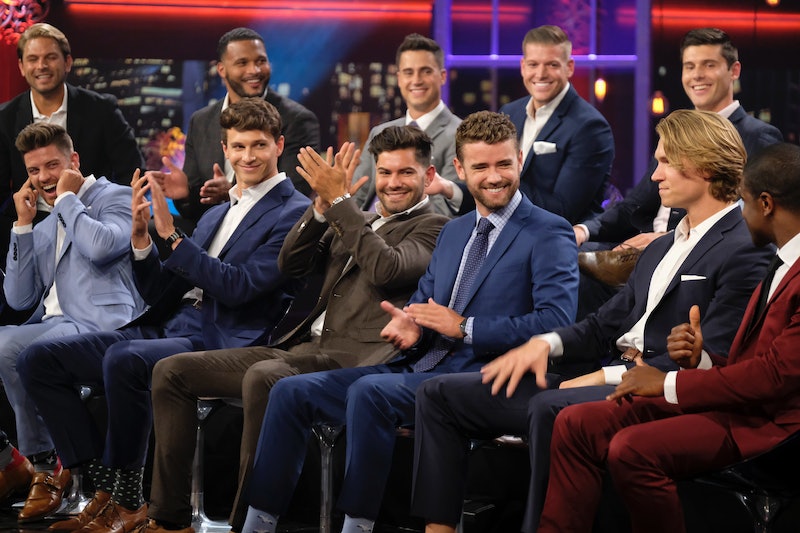 Hannah is about to choose her man on The Bachelorette, which means ABC is already prepping hard and fast for the next season of The Bachelor. Sure, there are six weeks of Bachelor In Paradise shenanigans to get through, but the big show — the one that started it all — is closer than you might think. That's right: The Bachelor 2020 should start filming really, really soon.

The Bachelor franchise's schedule is, by now, pretty set in stone. There's a January Bachelor premiere, then a break for Dancing With The Stars followed by a Memorial Day-ish start date for The Bachelorette, which goes right into two days a week of Bachelor In Paradise. After that, another Monday night show for ABC — usually more Dancing With The Stars — takes us through the end of the year, and bang, we're back where we started. Filming typically lasts about two to three months — for example, Hannah started filming her season in March for a late May premiere. If we build that out, a January air date for The Bachelor would need to start filming in the fall, around September or as late as October, if production pushes it and needs to get wrapped by Christmas.

While ABC has to announce the next Bachelorette pretty shortly after (and often during) the Bachelor finale, they have a little bit more time when it comes to revealing the next Bachelor. That's because Bachelor In Paradise is in the middle, and sometimes, our next Bachelor comes from that bucket of men — remember the Nick Viall redemption story? Production could completely overlook all the men on Hannah's season and go for someone from the backlogs of Bachelor Nation. Although considering how well that went when Arie Luyendyk was the Bachelor (spoiler alert: it was bad), maybe that's not the best idea.

Right now, speculation about the next Bachelor is focused on some of the many great guys from Hannah's season, and it will surely be hard to choose. "There's a lot of clamoring for Mike [Johnson]," host Chris Harrison told Us Weekly. "Garrett Powell... then, obviously we have the final three guys. We don’t know how this is gonna shake out. So I want to see the After the Final Rose. We have two nights of live TV where those guys are gonna be front and center. We'll see the sentiment and how Bachelor Nation feels."

With all of that said, Harrison may have a personal favorite in the running. "I love [Mike]. The smile, the charm, the sincerity, the maturity," he told The Hollywood Reporter. "He’s a great man and I feel like he's a dear friend of mine already, so he's a great candidate and he's definitely going to be in the mix."

We all know Harrison's opinion carries a lot of weight — and fans certainly love Mike, too. But whoever ultimately nabs that Bachelor title, he'll have at least a month to prepare, reflect, and get ready for the journey of his life.