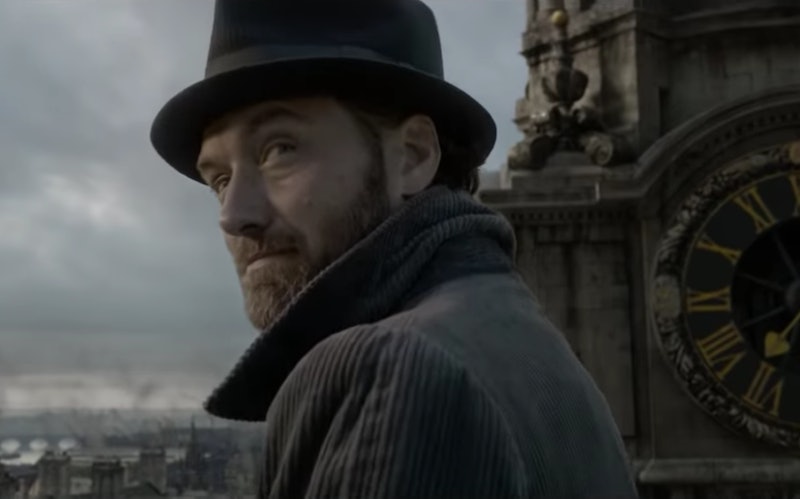 The new Fantastic Beasts movie, The Crimes of Grindelwald, picks up after the events which took place in 2016's Fantastic Beasts and Where to Find Them, but not immediately. Screenwriter and Harry Potter author J.K. Rowling took to Twitter herself to clarify that the sequel "doesn't begin days after first movie ends." So when does Fantastic Beasts 2 take place?

According to CNet, the magical movie that hits theaters on Nov. 16 takes place a year after the first movie's events, which sets it in 1927. As you'll likely remember, the first Fantastic Beasts movie ends with Newt Scamander (Eddie Redmayne) helping the Magical Congress of the United States of America, aka MACUSA, to capture the dark wizard Gellert Grindelwald (Johnny Depp). Sometime in between 1926, when the first Fantastic Beasts was set, and 1927, Grindelwald escapes from prison and resumes his attempts to start a war between wizards and muggles so wizards and witches can have control over the world. In the trailers for The Crimes of Grindelwald, a young Albus Dumbledore (Jude Law) suggests that Newt might be able to stop Grindelwald in Paris, so it seems likely that most of the action of the new movie will take place on the shores of the Seine.

Even though the first two Fantastic Beasts movies take place over the course of two years, that doesn't mean that each movie in the series will follow that same pattern. In October 2016, Rowling announced that the Fantastic Beasts spin-off series would include five movies in total, according to The Independent. Later, Rowling took to Twitter to announce that the series would span the years 1926 to 1945, so there will definitely some multi-year time jumps throughout the full series.

If you look at Pottermore's biography for McGonagall now, the deputy Headmistress' date of birth isn't mentioned, but Harry Potter fans had already taken to Twitter to point out the potential timeline error.

While most fans who had picked up on the timeline confusion had expressed disapproval of the potential retcon, some had proposed a different theory: that the McGonagall in the new film could be the headmistress's grandmother — who was also named Minerva, according to Pottermore.

Even if Professor McGonagall wasn't born yet (in theory) when the action of this second movie takes place, it sounds like an eight-year-old McGonagall could potentially have a role in the last film of the series, which will be set in 1945 (at least partially). Or maybe Fantastic Beasts 2 actually will retcon the timeline of events so a young Dumbledore could interact with a young McGonagall — honestly, that sounds pretty great.