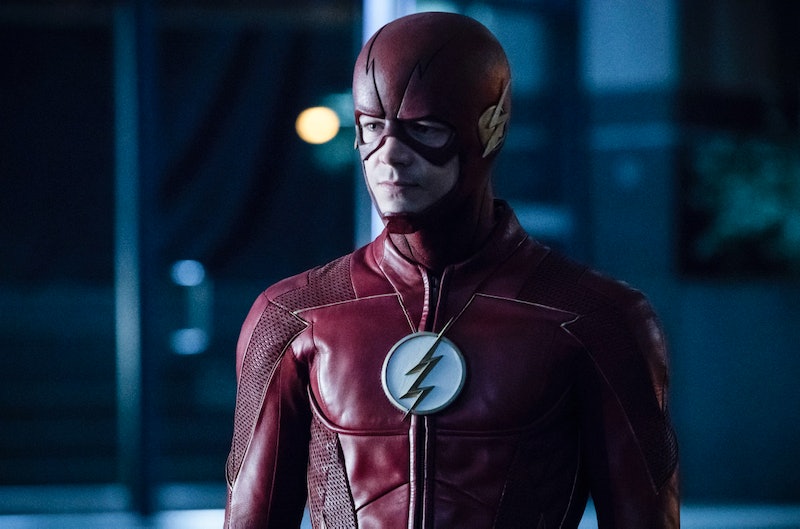 Luckily for fans, Barry Allen won't be zooming off their screens any time soon. The CW's hit superhero showThe Flash was renewed for Season 6 back in January, along with the rest of the network's DC Comics lineup. We don't yet have an official premiere date, but we know that the show has historically premiered in the fall on the Tuesday after the close of New York Comic Con, which is Oct. 3 to Oct. 6 this year. That means we're looking at a likely air date of Oct. 8, 2019 for Season 6 of The Flash.

With the show's renewal comes a shuffling of management: showrunner Todd Helbing is stepping down, and co-executive producer Eric Wallace is taking over. With Arrow heading into its last season this fall, Wallace is poised to take over The Flash right as it becomes the oldest (and most popular, according to The Hollywood Reporter) DC show in the Arrowverse lineup. Flashverse, anyone?

It's no surprise that The Flash is making a return alongside Arrow, Supergirl, Black Lightning, and Legends of Tomorrow. The CW has gone all in on their DC Comics programming, and they're gearing up for yet another major crossover event, this time called "Crisis on Infinite Earths." With Arrow ending, this is likely to be their biggest one yet, and The Flash's sixth season should feed directly into the crossover in December.

Helbing teased that The Flash Season 5 finale will set up this crossover in a major way. "There's a big thing in this episode that tees up the rest of the Crisis arc for next season," he told TVGuide. "We've been laying Easter eggs the back half of this season, especially, but there's no way you're going to miss this one."

For those unfamiliar with Crisis on Infinite Earths, it was a wildly popular limited DC series by Marv Wolfman and George Pérez. Written in 1985, the project is credited with popularizing the kinds of massive superhero crossover events that we see all the time today. It's a story that essentially took all of the various DC Comics realities and compressed them down to a single timeline. The reasoning for this was simple: the multiverse had made the continuity super messy, and both writers and fans were having a hard time keeping track of which stories were happening where, and with what versions of each characters.

Crisis made things much cleaner, but having every single DC character shoved into one single comic came at a cost — the body count was ridiculously high, with deaths in the hundreds. The two most famous casualties? Kara Danvers and Barry Allen, the latter of whom sacrificed himself to stop the Anti-Monitor. Yeah, now's the time to feel concerned for the scarlet speedster.

The Flash has alluded to the events of Crisis since its beginning. In the show's pilot episode, Harrison Wells is shown looking at a 2024 newspaper in his time vault. The headline reads "Flash Missing, Vanishes in Crisis." It's possible we'll see the "Crisis" event play out differently than in the comics, as we know the last crossover event, "Elseworlds," already featured Arrow's Oliver bargaining with the evil Monitor to spare Barry and Kara's lives. However, we never heard what he offered in exchange. This may very well be how Arrow says goodbye to its lead: with Green Arrow revealing that he will die in this iteration rather than Barry, which would close out his arc in his last season and potentially pass the mantle on to someone else.

It's also possible Barry is still on the chopping block; he is, after all, not the only Flash we have, and Arrow might not be the only show that sees the passing on of the torch. We'll just have to wait and see, but when The Flash makes its return, keep your fingers crossed for Barry.